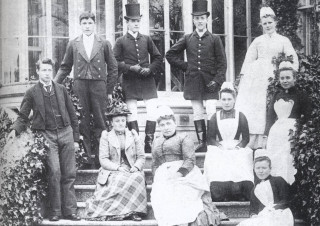 Clara Wilshere who lived in Pirton is shown here with other members of staff at her employer's house in London, c. 1890s.
Portrait of Pirton 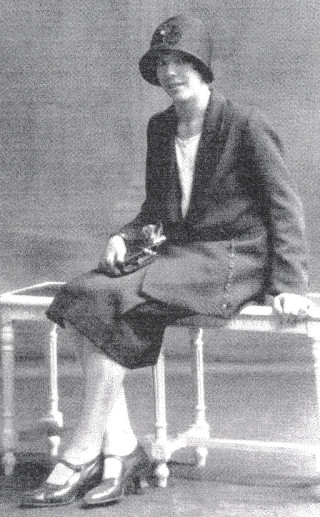 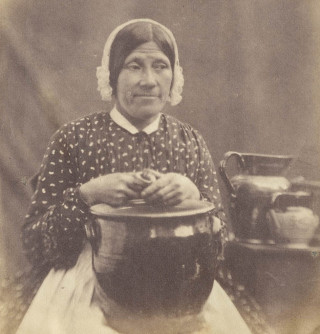 One of the most common and difficult obstacles for servants was to oversome feelings of isolation and lonliness. For most servants, a “social life” was restricted to contact with one or two fellow servants. Leisure time was controlles by the employer and any time off or entertainment was a bonus. Occasionally time off could be given as a reward but could be also taken away as punishment.

By the 1880s, servants were given a half day on Sunday starting after lunch (and only if their chores were completed) and by 1900 an evening a week or a day a month in larger households. Holidays were usually two weeks a year and many servants went home to see their families.

“At breakfast, we all sat down at a long table. The butler at one end and all the servants up the sides, about twenty of us”.

Male servants had more free time, partly as they could be sent on errands and could loiter. In many homes, there was a strict rule about servants having visitors and in most cases callers made visits when the mistress was out. Fear of misconduct by women lay behind most of the restrictions and relationships between servants were not allowed. Friendships had to be struck up discreetly. If a maid was going to get married, her employment would be terminated as she would have to leave, to “keep house” for her husband.

When the owner of a house went on holiday, most of the staff usually went too, although it was more a change of air than a holiday. There may be special events too – at Ashridge, Lady Brownlow’s servants were able to catch glimpses of the cream of society, such as Disraeli, the Shah of Persia and Oscar Wilde which must have caused great excitement in the kitchen and the staff at Hitchin Priory were able to go racing at Newmarket as their master was a big fan.

In smaller houses, life was less exciting. Lill Illot worked at Hertingfordbury Hall in the 1920s as a maid and had hardly any time off at all: “I worked from six in the morning ’til about ten at night… the only time we had off was about an hour in the afternoon, just for a rest, we sat for about an hour and then started to get the teas”.

There was no recognised dress for female servants until the mid 19th century. They wore their every day clothes and lady’s maids sometimes wore their mistresses cast-offs. Gradually maids came to wear a print dress for the morning and a black dress for the afternoon, both with a white cap and apron.