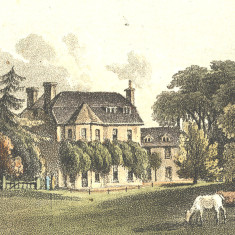 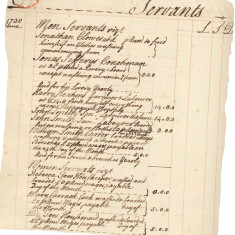 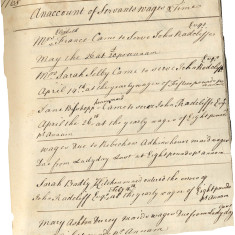 Accounts of William Barber, steward to the Radcliffe family of Hitchin, 1768. Barber kept accounts of servant wages and when they came into the Radcliffe's service: "Jane Bishopp, Housemaid, came to serve John Radcliffe Esq. April 26th at the yearly wage of eight pounds per annum"
Hertfordshire Archives and Local Studies, Ref: D/ER F194 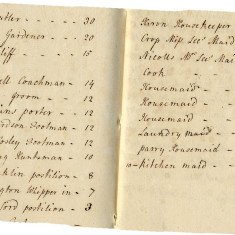 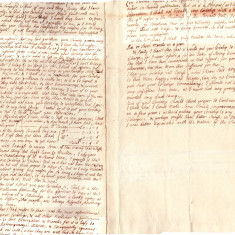 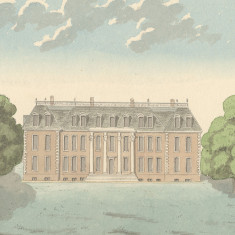 One of the most sensitive areas of employer-servant relations was that involving wages and allowances.. Throughout the 19th century, wages were paid at lengthly intervals, perhaps every half year or every quarter. Pay varied considerably according to skills, experience and length of service. Those in working towns earned more than their counterparts in the country and large, wealthy households paid more.

While the wages paid to the servants might appear to be relatively low, their board and lodging was paid for so mant had the opportunity to save. Younger servants would find the money useful when they married and older servants saved for their retirement. Many sent money home to their families if they could afford it.

Wages in the 17th century:

Earnings were low for the average 17th century family. They were decided by the Justices of the Peace in that area, with the typical daily wage for an agricultural labourer being about 8 to 10 pence per day, slightly less than a soldier’s wage. Hertfordshire’s quarter sessions rolls for 1678 list the rates of servants’ wages: Amenial male servant could get £5.00 per year (around £615.00 today) whilst a woman would get only £3.00 per year (£368.00 today.)

We are wearing our very lives in their service!

We can wonder how people managed to survive on such small incomes, but they had no houses, insurance, bills, or cars to pay for. If you couldn’t work or didn’t get paid; you would go hungry or end up in the workhouse. Benevolent societies appeared in the 19th century to help elderly servants who were hard up. An article from the Herts Advertiser in 1870 talks about building “an asylum for aged and decayed servants.”

Gardener unhappy with his patch

In the mid-eighteenth century, Lord Cowper’s gardener at Cole Green wrote a very long letter of complaint to his master. He was annoyed because the Lord Cowper’s friend, Lord Grantham gave 20 Guineas a year to Cowper’s other servants and he was excluded from the bounty…

The Servants’ hall stinks, my Lord

Being a gardener he saw himself as having a higher status than the other servants and requested to dine at the second table “as was custom in most noblemen’s families.” He referred to his fellow servants as “illiterate and ignorant” and said that the servants’ hall was small and smelly when it was full of people and dogs and “very unpleasant!”. We don’t know if his letter resulted in promotion or the sack.