The Daily Grind of Servants 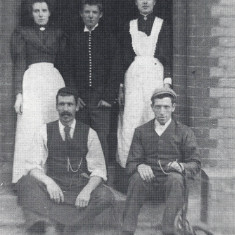 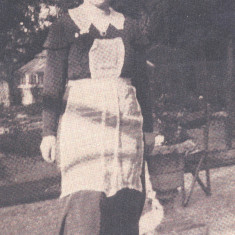 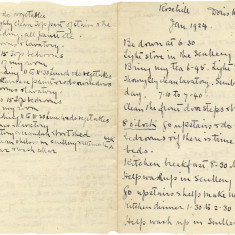 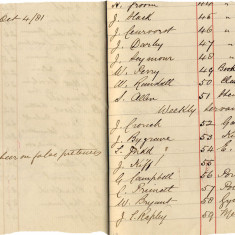 List of servants at Haileybury College, wages, position and reasons for leaving, 1876 - 1881. L Judd, a weekly servant who cleaned the "earth closete" left (or was sacked) after obtaining beer on false pretences.
Hertfordshire Archives and Local Studies, Ref: D/Ehc Z2 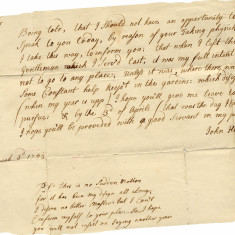 I quit!! Resignation letter of John Hay, gardener to Earl Cowper in 1741. He adds a "P.S" stating he hopes the Earl will not make him stay another year.
Hertfordshire Archives and Local Studies 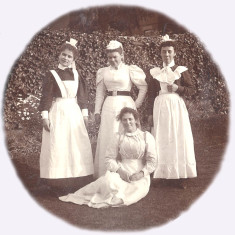 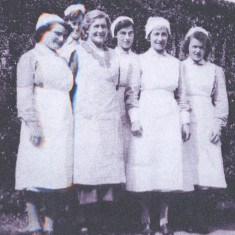 Staff at Crofton Grange School, now Hamels, 1940. Evelyn Piggott (right) started work there at 14 and hated it. She'd spent her childhood cooking and cleaning for her brothers and sisters. She worked 80 hours a week, but the food was good... "We had a very good cook, so we were fed well. I think that's why I've lived so long!"
No Washing Machines Then - Braughing Local History Society

“It was not a happy time but I had a roof over my head”.

Working conditions of domestic service varied from place to place. The general duties of servants are known from the household manuals that were published at the time. For most, the day was long, monotonous and exhausting. A typical day for a maid in a modest house began at 6am. All the cleaning jobs were to be completed before the family got up. There was sweeping, polishing, lighting fires, carrying hot water, bedrooms to be cleaned, chamber pots emptied, then after lunch – sewing, mending, more fires to light, laying tables, waiting, helping in the kitchen (if there was a cook) before finally going to bed around 11pm. It was only by strict routine that the work of cleaning a house could be accomplished.

“…I worked from 7 in the morning until the children went to sleep at night. …I was the only nursery maid and had to do all the donkey to light a coal fire, scrub the nursery floors, wait on the nanny, do the cleaning and dusting, fetch the lunch, wash up, …and through kneeling and scrubbing the floor, I got housemaid’s knee”.

Housemaid’s knee is also known as prepatellar bursitis. It is caused by inflammation of the burse (a small fluid filled sac) in front of the knee cap. It more commonly occurs in people who spend long periods of time kneeling.

My second job – the Banyers

“…the boss was very strict, we were not allowed to use make-up as he said it made us look common. We had to be in by ten o’clock at night when we had time off. We had one week’s holiday a year which had to be taken in winter when we were not so busy”. – Elsie Sharpe (Barley born and bred)

“I went into service when I was 14. My mistress was French, married to an Englishman, and what a hard task-master – she thought she had bought me! It was only a 4 bedroom house but a mansion did not have the clean that place had …she would put a piece of fluff in certain places to make sure I had cleaned properly …every minute of the day was filled with jobs …once a week my evening off began after tea and ended at 8pm so I could wash up …most nights I was not finished until 11pm. It was not a happy time but I had a roof over my head. I stayed with Madame for 4 months and what a lecture I received about lack of gratitude when I gleefully gave a month’s notice.” (Anon. Turning Back the Clock, Wormley WI.)

Do the slops, Doris

Doris Roberts had a raw deal when she went to work as a maid for Mrs Hopkinson of Rosehill, Montague Road, Berkhamsted in 1924. Mrs Hopkinson wrote her a list of shores to complete. The time on each job are very specific… and only one side of the list is shown in the picture.

A between-maid (or a “tweenie”)

“…I left work at 14 in 1934 and started at Chipperfiled House. Every Monday the kitchen floor had to be scrubbed on hands and knees… I didn’t like th job and was a bit bolshie… I left the Kellys, I didn’t like it. I only had half a day Wednesdays and every other Sunday off. I started at 7am.” Joyce Burgin, nee Coale, (Chipperfield Within Living Memory).

“I started work as third housemaid… we had to get up at 6am, we cleaned and polished the floors everyday… Mr Lloyd who owned the house was a nice man… at teatime we had a share of the food that was left and did mending ’til 8pm. We housemaids were not allowed to talk to the kitchen staff. I was there for 4 years and although the work was hard for little pay, I was happy” Edith Hall, (Abbots Langley Local History Society, 2001).

“Mrs Howard Carter was very nice to us and didn’t mind what we did as long as we answered the bells. I got up at 6′ o clock after the stoves were lit we laid breakfast in the Servants Hall. After breakfast I tidied the dairy… the Carters were very generous but in all the seven years I was there, I only had one rise. By the time I left I was earning £45 a year. I left to get married.” Hilda King, (Ardeley Memories).

“I was there ten years in that kitchen and I got five shillings a month, hundreds of dishes I must have washed up; but I didn’t mind, I was happy… afterwards, when I got a place as a cook it was £30 a year.” (anon.)