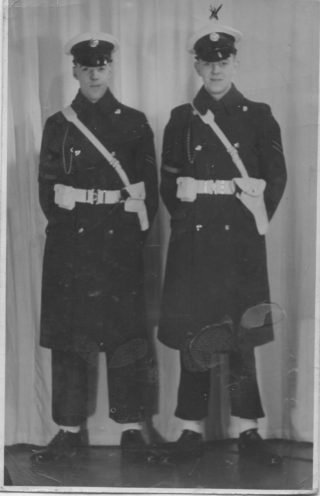 Ted is on the right.
Ted Humphreys

In the September, after my 18 birthday in 1948. I journeyed to West Kirby1 for the initial ‘Square bashing’ .

I could not get there quickly enough and the two years I spent in the Royal Air Force remains a high-light in my life.

I was allocated to join the RAF Police and I went to PERSHORE2 to be trained.

1948 was a hard winter and on Fridays two men only had to draw fuel to last the huts for the full weekend. Obviously this was not enough so when darkness fell we used our field craft skills. We went out in two’s and crept to the back of the Officers’ Mess and helped ourselves to all the fuel we could carry. The hut Corporal also asked us not to forget him! – CORPORAL NORTON (?)

The Mum of one” inmate” complained to her M.P. that there was no hot water for washing and shaving etc. This was true but the Government spokesman stood up in Parliament to state that such an allegation was false.

When we were inspected by Group Captain KIRBY, he bought his dog which was known to pee on our highly polished hut floor!

At the end of the course we were allocated, based upon the exam results.  Those above a certain level were allocated as PROVOS3. Below that level lads were consigned to Guard Room duties! (Sorry lads!). (This only changed when we were posted to Germany in 1949, when most RAFP became Provo’s grade.)

My first posting was RAF. DUXFORD4 (PROVOS). Our main duties were:

a) Foot and mobile patrols in CAMBRIDGESHIRE and out as far out as Bedford.

b) Regular visits to RA F CARDINGTON. One of our duties was to die stamp 1250 LD. cards that were issued to the Regulars who were being trained at Cardington.

c) I was asked if I would like to become a DOG HANDLER. I declined. The only place to be at night was to be in bed, not working on a draughty airfield at night!

d) We joined Bedford Police and mobile patrols in their cars.

When we were off duty at DUXFORD we went into a transport cafe just up the road from the main gate.

Our senior NCO was named Flight Sergeant Clarke (a nice man) and it was his partner a nice lady who ran the cafe. I cannot remember her name (Betty?) but very often the telephone would ring to ask where we were and she would say that she had NOT SEEN US! There must have been a code as FIt S. Clarke would very often appear and look surprised to see us!

It was during this time I was sent back to PERSHORE to learn to ride a Motor Cycle. Going back to Pershore as an Acting Corporal unpaid made life enjoyable as against that of being an Erk. I passed the test and returned to DUXFORD.

We participated in an exercise in SUSSEX where potential aircrew were dropped off in a lorry and told to find their way back to a designated area without being caught  I believe that most of them were caught. They looked worn out and although there were only two of us motor bikers that drove about during the day and night, they thought that there were dozens of us!

On one occasion I accompanied WING COM ‘Ginger’ Mason on a visit to RAF HALTON.5

He was a very pleasant man and I was told years later that he had died during an overseas posting.

Before we went on the SUSSEX exercise W/C Mason told us two motor cyclists that he did not want us to crash and that we should not think that we were in the same league as the Royal Corps of Signals display team! (An active Motor cycle display team of the time).

This was considered a “Home posting” so that we did not get paid as an overseas posting! I arrived there just as the Berlin Airlift finished!

Life in Germany was very pleasant. It was here that I met DEREK CHANDLER.  He moved to Australia in the 1950’s and we regularly keep in touch by letter.

One of the motorcyclist duties was to meet a convey at one place and take it some miles further on so that the convoy would not get lost! This work took us only half a day and the rest of the day was our own. I have been looking for a job like this ever since!

In Celle and Hamburg we were in very comfortable billets. CeIle was in an EX NAZI YOUTH building. The four sides were around a central parking area.

When wanting a bath you filled the stove with coal dust brickettes, lit them with paper and waited for the water to heat!

Hamburg HQ was in a large house at the side of the ULSTER (Large Water area) Where we had a canoe!

These were made available free of charge but you had to sign your name to indicate that the condom had been received. The signatures in the book showed that KING GEORGE VI, GENERAL MONTGOMERY etc. had drawn their condom at that very building!

I was so innocent/ignorant that I did not use the condom for the purpose for which it had been intended, so I used to give them to civilian staff who could not obtain Condoms of this quality. They described their condoms as being similar to that of bike inner tubes!

One of the first things after the war that the Germans redeveloped was their night life. Our main foot patrol was to try to make certain that no members of our forces were in the brothel areas. This took us to night clubs, brothels etc. We rarely caught anybody but it was interesting to check out all the nightclubs and watch the show’s that most of them put on.

Whereas we were trained to use the rifle during initial training I cannot recall being trained to use a pistol. In Germany we were issued with a pistol and ammunition and it is a wonder that more people were not killed when we were let loose on patrolling the streets of Germany!

There was one incident of vandalism that was seen to be hilarious at the time. Hamburg HQ was in a bomb damaged house with a baronial type hall. About 10 feet above the fireplace CUPID’S arm pointed up towards heaven.

The time was about Midnight when we returned from the evenings foot patrol. The house was empty. ‘Watch me’ said one of our number and with this he cocked his SMITH & WESSON revolver and fired at cupid. The room filled with a dense fog of plaster dust and to a man, we all wealded brooms so as to brush the evidence out of sight. The fact that all the lads rushed to get brooms so that their colleague would not get into trouble illustrates the camaraderie that existed in those National Service times that ceased to exist after Demobilisation. The bullet was found sitting on the C/O’s door mat!