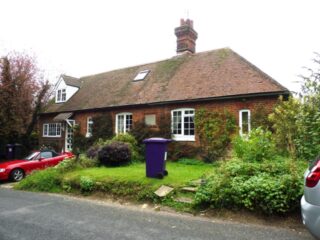 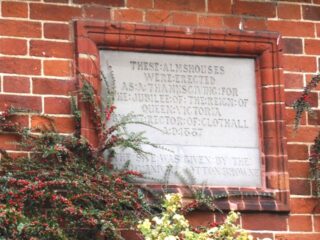 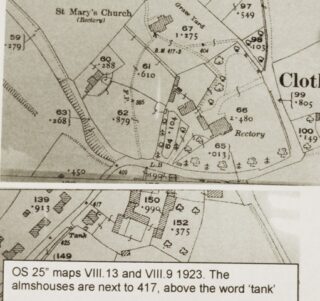 1887 was Queen Victoria’s golden jubilee. Various charities were founded in celebration, one of which was the Fox Lambert almshouses at Clothall. The dedication stone says they were provided by the rector of Clothall, the land being provided by Rev J G & Mrs  Cotton-Browne. Neither  Victoria County History nor Historical Atlas of Hertfordshire mention these almshouses.

According to Brenchley there was no endowment. The almshouses were maintained by several ancient charities, the oldest being that of Dr James Sibbald, rector from 1665 till 1708. The trustees were the rector and churchwardens. The Clothall Almshouse charity is registered with the Charity Commission ref 238669. The deeds are dated 4 august 1890 and scheme of 27 February 1973. The Reverend Canon Fox Lambert charity is linked. Its purpose is the general benefit of the poor.

Selling. Wittering noted in about 1973 that one of the almshouses had been sold. This may be to pay for improvements to the other. The second almshouse has since been sold, hence the Clothall Almshouse charity no longer provides accommodation. Wittering includes a photo from about 1973. Vyse, writing about 1982, noted both had been sold. Since then the almshouses have been extended, but the original dedication stone remains.

Frederick Fox Lambert was rector of Clothall from 1879 – 90 before becoming the vicar at Cheshunt. There he purchased a training college for priests, renaming it Bishops College. He was born in 1843, and died unexpectedly in 1920 after a period of ill health. His estate was over £113,000. His obituary notes he was a devout and learned man who was also a bit of a sportsman. He owned a moor in Scotland. Neither the newspaper obituary nor Brenchley refer to the almshouses.

The Almshouses of Hertfordshire, by W O Wittering
Article in Hertfordshire Countryside  29 (187) Nov 1974. Includes a photograph