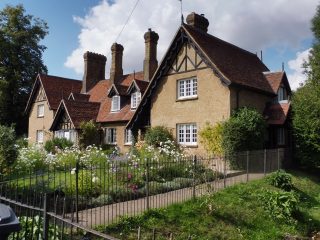 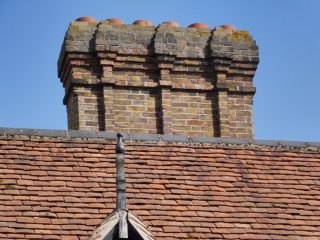 One of the ornate chimneys on the former Eastwick almshouse. Aug 2016
Colin Wilson 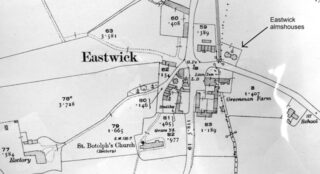 Historic England’s citation is that this was a block of five almshouses designed to look like a medieval hall house. They are now three dwellings.

They were erected in the later part of the 19th century, probably in about 1890, for the nearby Gilston Estate. A newspaper obituary for Mr A Dawkins, of Harlow who did a lot of work for the Gilston family. He built the almshouses on the site of the Pyrgo Arms (residents are recorded in the 1890-1 period).   Presumably they were for retired workers but this has not been verified.

The buildings were listed by Historic England in 1984.

Although erected in Victorian times, they are not mentioned in Vyse’s book on Victorian almshouses.