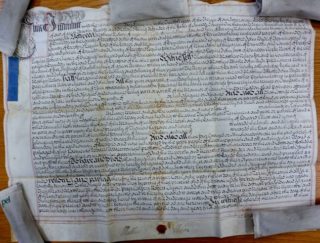 The 1726 indenture. The section referring to the almshouses is just over half way down, commencing with 'And Also All those four cottages...'.
Courtesy of Hertfordshire Archives and Local Studies. Ref CP/51/25/1 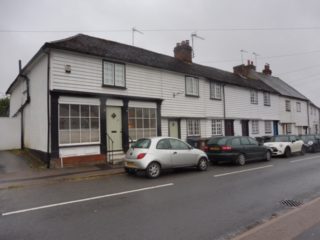 The extended almshouses, looking from the petrol station across the road. The shop section was not part of the almshouses.
Colin Wilson 2016 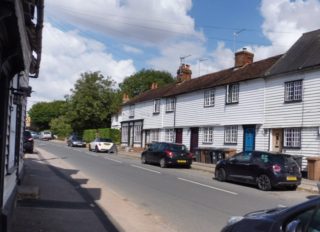 The extended buildings which were the first almshouses. looking from the south.
Colin Wilson 2016 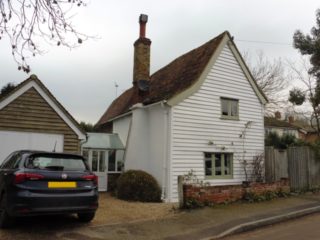 Orchards, in Drury Lane, was formerly Pipers, the workhouse master's house. The later almshouses were sited in the garden to the rear.
Colin Wilson 2017

Poor relief was a major expenditure for local people and many ways were sought to reduce the costs over the centuries. A document of 1697 exists agreeing to the building of 4 almshouses for four widows, following a meeting of all the householders in the village. They had decided that was the cheapest option. The whole cost was not to exceed £50, which was the money in hand, profits from rents of the Charity lands. A plan of the Poors land in 1781 is held at HALS (ref CP51/25/6). A further document of 1726 (ref CP/51/25/2) is an indenture for a year’s lease of lands, including the almshouses.

The almshouses were in High Street, on the east side, just north of the junction with Drury Lane. The widows paid no rent, received free coal in winter, and occasional parish relief from the rates.

The Hunsdon workhouse was in Drury Lane. The building now known as Orchards (formerly called Pipers) was the workhouse master’s house. The workhouse closed in 1836 as a result of the 1834 Poor Law changes which centralised the workhouse system. The seven inmates (3 men, 3 women and 1 child) were sent to the Ware Union. The empty workhouse was made into four flats into which the almshouse occupants were moved. The former almshouses were altered and enlarged, then rented out.

An article in the Herts Mercury for 16 Jun 1917 names some almspeople from the late 17th century, suggesting there were almspeople in the village before 1697. It also suggests the almshouses may have disappeared between 1834 and 1868 as the Charity Commissioners did not mention any in the 1868 report.

When the almshouses fell out of use is unknown. They are not annotated in the OS maps of the late 19th century, though that cannot be regarded as definitive as a number of known almshouses in other places were not annotated. The original buildings in High Street were later extended forwards, hence the current appearance does not reflect the original look.

At a visit in 2017 the owner of Orchards, who had lived in the property for about 50 years, told me that the almshouses were originally at the back (in the garden) and that in reality they were more like a collection of sheds.

Untitled and undated booklet by Ware College group. Note: it is not known (Feb 2019) if these publications are still available.

CP/51/25/1   Document 2 is an indenture for a year’s lease, dated 16th May 1726; document 7 also refers to the almshouses. See photograph & transcription attached to this article.

DP/35/8/1 Vestry minutes 1822 – 1881
Description: Includes memorandum relating to land in Great Parndon, Essex, belonging to the poor of Hunsdon and Eastwick, and copy of evidence respecting a lane between Jarmans Farm and Gipsons Shaw, both 1853