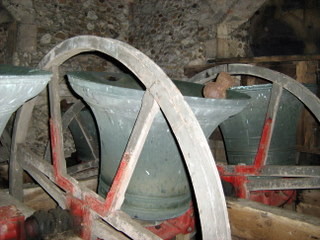 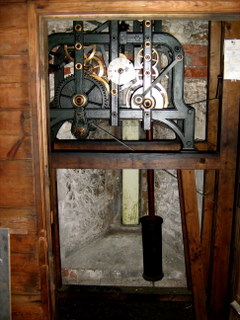 Weston Church is a long established church with Saxon roots.  It has Norman arches surviving within the building, but was heavily restored by the Victorians.   It has 6 bells in a belfry tower over the centre of the church, along with a hand-wound church clock.  The heaviest bell in the ring has a clock hammer that sounds the hour.

The bells still ring out for church services and weddings; rung by a band of local people, ranging in age from 11 to 80 years old.

The no. 1 or Treble bell is called John; named after John Pryor who gave the bell for the Queen Elizabeth II’s Silver Jubilee in 1977.  It weighs 3cwt, 2 quarters and 221 lb, which is 175 Kilos.

The no. 4 bell is definitely a Miles Gray and was cast in 1634, during the reign of Charles I.  Impressions of coins of the period are cast on the bell.  It weighs 6cwt, 1quarter and 8 lbs, or 315 kilos.

The no. 5 bell is John Warner, cast in 1867, during the reign of Queen Victoria.  This was installed when the tower was completely re-built.  All The bells were taken down and re-hung in oak frames.  The weight is 7cwt, 6 lbs or 359 kilos.

The no. 6 or Tenor bell is Richard and carries the inscription “Richard Chandler made me in 1682”, this was during the reign of Charles II.  Richard’s voice is heard when the clock strikes.  The weight is 10 cwt 15 lbs or 516 kilos.

Each bell is hung on a wheel in the oak frame – this is the English method of ringing bells.  It was the invention of Fabian Stedman of Cambridge University, and allowed the development of “change ringing” on bells, the way in which they are rung to this day.

This training bell was installed in 2009.  It is connected to a computer, sounding only through the speakers, and cannot be heard outside the tower.  A web cam allows learners to see the bell in motion as they learn the skill of bell ringing.   In autumn 2009 the bells are scheduled to be taken down.

The 5th and 6th bells are being recast and the rest retuned at the Whitechapel Bell Foundry.  The whole ring should be back in the tower well before Christmas 2009.