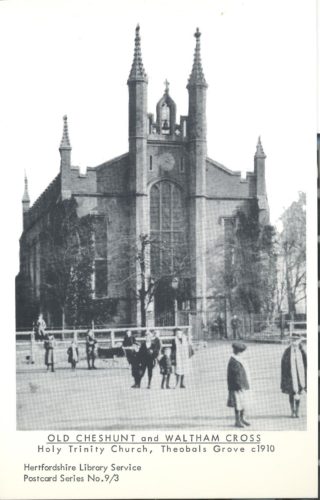 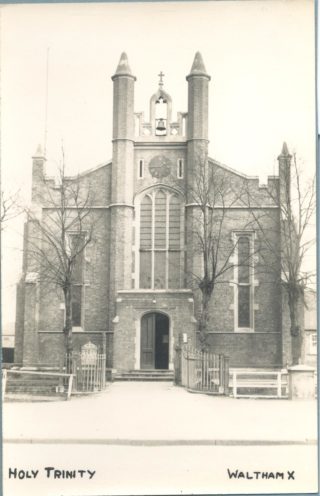 Until the 19th century, Waltham Cross simply constituted the southern part of the parish of Cheshunt, served by St Mary’s Church in Churchgate. Over time, however, the parish as a whole grew and the part around the historic Eleanor Cross came to be regarded as a distinct centre.

In 1832, a new chapel of ease was built to serve Waltham Cross. The architect was Edward Blore, best known for completing Nash’s building of Buckingham Palace, and it was given the name Holy Trinity Church. In 1855, a new Parish of Waltham Cross was formed, and Holy Trinity became its parish church.

The church’s Grade 2 listing describes it as:

The iron railings outside the church also have a separate Grade 2 listing. They are described as:

Probably 1831-2 by E Blore. Cast iron railings to bridge and E side of Theobalds Brook in front of church. Bridge railings have leaf ornament finials. Tall octagonal posts each end with traceried panels and ogee crocketed finials. Square posts to sides with tracery and crenellation. E side boundary rails with 2 horizontal bars and square posts at intervals with crocketed pinnacles. Included for group value.

In 1975, local Methodists, who till then had worshipped in a church in Crossbrook Street, were invited to share the building with the Church of England congregation at Holy Trinity. It was renamed Christ Church and has kept this name ever since.

Christ Church still thrives, with the Anglican community there describing itself as:

an inclusive, liberal Church of England church, in the catholic tradition. We recognise the ministry of both men and women as deacons, priests and bishops.

Like most churches, it offers facilities to appropriate community groups, such as the Mothers’ Union and a Bereavement Support Group, and it maintains close links with the Holy Trinity Church of England School.