The Friends (Quakers) in Hertford 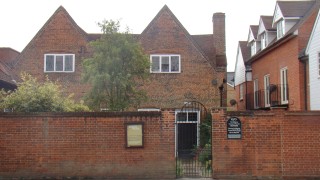 The famous Hertford Meeting House; the oldest of its kind in the world
Matthew Juggins

A record of births, marriages and burials amongst the Quakers in Hertford is held at HALS (NQ2 5B/2). The record runs from 1660 to the early part of the eighteenth century.  Information from this has been added to Hertfordshire Names Online.*

The Meeting House of the Society of Friends (the Quakers) in Hertford was built in 1670 and is reputedly the oldest in continuous use.  The records pre-date this as meetings were held in private houses which are sometimes identified such as the marriage of Nathaniel Gerrard from Buckinghamshire to Sarah Crouch of Hertford on 22 February 1666 at the house of Abraham Rutt.

The record also gives more information on Sarah Stout’s family – see “The Mysterious Case of the Lawyer and Heiress”.

Henry Stout married Elizabeth in 1660. They had two children but Elizabeth survived the birth of the second child by just three weeks and was buried in April 1663.  A year later, Henry married again:

“Henry Stout of Hartford and Mary Sanderson of London were married on the twentieth day of the second month of the year one thousand six hundred sixty four in the Citty of London”.  (The calendar year started in March and so they were married on 20 April 1664).

Sarah was the sixth child of the marriage:

Henry died in 1695 and four years later there is the record of Sarah’s burial:

There is no record of the exhumation ordered by her mother nor of a re-burial. Her mother, Mary, died eight years later:

The records indicate the incidence of infant mortality and another hazard was small pox which accounted for eleven of the burials in 1699.

Some did have a long life. 11 May 1707 saw the burial of Frances Rutt, age 85,  widow of Abraham (who hosted the marriage of Nathaniel and Sarah – see above).  Less specific is the record of the burial of the widows, Mary Dawson of Hertford and Elizabeth Bridgman of Sacombe who were described as  “very ancient” which would also apply to Henry Sweeting who was buried in 1712, aged 95 – “One of the original Friends and purchasers of the burial ground”.

Sometimes the burial was not straightforward. The register noted that:

“Mary Cort of London was buryed in the burying ground at Hertford the 15th of the 7th month 1696 [15 September].  The maid died at Hertford and when the corpse was brought out in order for burial, the Parish Clerk arrested it for his Fees or Dues (as he calls them) which the Father of the maid deceased could not pay but yielded up the corpse for the (pretended) debt and when the Clerk saw that (as it thought being ashamed) acquitted the corpse of his arrest and after that her father and friends buried it”.

Other notes celebrate a life……

“Mary Fallowfield wife of John Fallowfield of Hertford, Relict of John Miles of Hertford and Daughter of Francis and Constant Moor of London: Departed this life the 12th day of the 3rd month 1723  [12 May] about ¼ hour past four in the morning, and she was decently buryed in Friends Burying Ground in Bengeo the 14th of the 3rd month being accompanied by many Friends and others.  She was an honourable woman, an affectionate and Extraordinary Wife, a Tender Mother and a sincere lover of Truth and the friends thereof”.

….. with the bonus of a good deal of family history.

*Hertfordshire Names Online can be found at http://www.hertsdirect.org/services/leisculture/heritage1/hals/indexes/indexes/