The Witch in the Graveyard 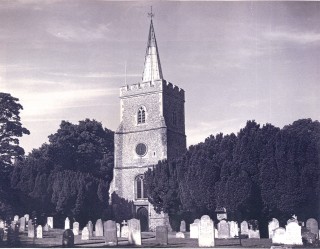 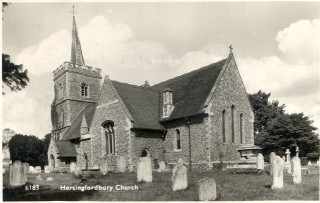 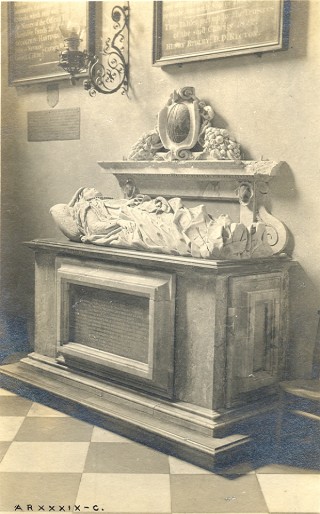 In a quite little village on the outskirts of Hertford called Hertingfordbury, there stands a small church known as Saint Mary’s.

Parts of this historic building including the Chancel date back as far as the 13th century whereas the West tower and North Aisle came in just two centuries later in the 15th century. However this is now mainly all covered up due to a near complete restoration in 1890. Lord George Augustus Cowper took it upon himself for the walls to be covered in flint-rubble and stone-dressing as well as the inside being re-painted and the pews rearranged. There was uproar over the pew layout and the fact that some of the doors had locks on. Lord Cowper had placed himself, his family as well as his servants with the best view at the front of the church. The Cowper family had been very generous and supported the church for many years and since 1708 every generation paid and helped with additions and renovations that the church had needed. Since 1890, apart from the new vestry (which was paid for by Lady Cowper), the main church building remains very much the same.

Lord Cowper in 1902 was very generous when it came to land that the church needed and even gave the church two cottages and ground adjoining the churchyard so that there was more space for graves. The church itself includes many monuments in the chapel which is also known as the ‘mortuary chapel of the Cowper family’. This includes a tomb chest in honour of the last Earl Cowper who died in 1905. However it is not just Cowpers who have memorials in the church. In the alter tomb under the tower there are recumbent figures of Sir William and Lady Harrington who both died in 1626 which has the figure of their kneeling daughter Lucy at their feet. Lady Calvert, first wife of Sir George Calvert, also has a memorial there. Lady Calvert, born Anne Mynne was, with her family collectively the chief land owners of Hertingfordbury in the 16th and 17th centuries. Two people whose charities are still benefiting children of the area are Grace Ellis and Walter Wallinger. Grace Ellis who died in 113 left 40 shillings per year to the poor for ‘as long as the world lasts’. Whereas Walter Wallinger left £400 to the Rector.

The Witch in the Graveyard

The memorials are not only in the church but also in the churchyard. Big iron rails surround small insignificant gravestones. Included here is Jane Wenham, the most ‘famous’ person to be buried here.

Known as the ‘witch of Walkern’, Jane was born in 1642 in Walkern, Hertfordshire. She was the last person ever to be sentenced to death with the term ‘witch’. In 1712 Jane Wenham was sent to trial in Hertford on the suspicion of being a witch; evidence in court was given by both Ann Thorn and the vicar of Hitchin. Ann Thorn stated that Jane had taken the form of a cat and tried to persuade her to commit suicide, whereas the vicar testified that Jane could fly; however, she could not recite the Lords prayer. The judge, a Mr. Justice Powell, humorously said there was no law against flying and urged the jury to decide that Jane was not guilty. However, the trial did not go in Jane’s favour, as she received the verdict of guilty and was given the death penalty for witchcraft. The judge sought an audience with Queen Anne to obtain a free pardon from her. This lead to Jane no longer being sentenced to death and the evidence was found to be false. Lord Cowper paid for a small home for Jane in Hertingfordbury to live, where she later died around the age of 90 on Thursday 11th January, 1730.

Before Jane was accused of witchcraft, she lived a very normal life in Walkern. She married a Phillip Cooke and had a daughter with him named Sarah in 1681. However, Phillip later died in 1696 and less than a year later she was already married to another man called Edward Wenham. Edward however deserted her as he had little money to support her. After the trial, Jane was too scared to go back to Walkern and stayed in Hertingfordbury. Jane knew at this time-around the age of 70, that she would not live for a great deal more of time and even starved herself to the point of near death for two years so she could pay for a decent funeral. She was buried in 1730 at Saint Mary’s church not far from her home, and the funeral was generously paid for by Lady Sarah Cowper.