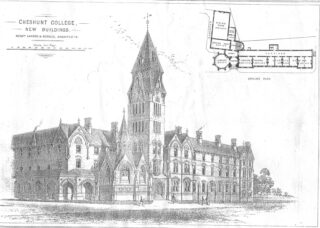 Located in the Churchgate area of Cheshunt, on the opposite side of the road from St Mary’s Church, stands the complex of buildings known as Bishops College. These now form the Cheshunt offices of the Borough of Broxbourne, but for much of its life, as the name suggests, it was a training seminary for Christian ministry.

Based around a house called Church Gate House, which appears from the listing to go back to the early 18th century, the college relocated from Wales in 1791. It had been begun by the Countess of Huntingdon in 1768, founder of the evangelical and nonconformist Countess of Huntingdon’s Connexion, to train young men for the ministry — either for the Connexion itself or for compatible nonconformist sects, such as Congregationalist.

The relocation, following the Countess’s death, appears to have been aimed at bringing the college close to London. After this, it was renamed Cheshunt College and was considerably extended at various stages through the 19th century. This included a chapel, opened in 1806, and extended accommodation, including a large dining hall, in 1820. In 1870, a further substantial extension included a hexagonal library, a tower and a three-storey accommodation block for students.

In 1905, Cheshunt College relocated again, this time to premises in Cambridge, becoming part of the University. It retained the name Cheshunt College, but in 1969 it merged with the Presbyterian Westminster College.

The year after being vacated, the Churchgate buildings were bought by the Church of England for the training of Anglican clergy. It was administered by a trust of three (later four) bishops and consequently named Bishops College (more accurately, Bishops’ College, but the apostrophe tends to be omitted).

Further additions were made during this period, the most important of which were a new chapel in 1936 and a new principal’s house in 1957. In 1968, however, this college too closed down.

In 1972, Bishops College was bought by Cheshunt Urban District Council (soon to be merged into Broxbourne Borough Council), initially with the idea of developing it into a leisure centre. By the 1980s, however, the council had decided to extend and refurbish it as its own civic offices.

Since the building were both listed and in a conservation area, changes were strictly controlled. The new buildings were not only designed in a style that echoed the existing one while having a contemporary look, but also built from the same types of brick and slate, while the existing view from the south-east also had to be preserved. The old and new buildings are connected by an enclosed bridge at first-floor level, and the projected was completed by 1987.

The listing for Bishops College describes it as:

There’s a separate listing for the Council Chamber, describing it as “included for group value”.

The follow books and pamphlets have been consulted and are available at HALS: