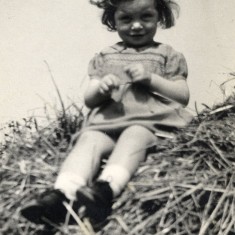 Margeurite in 1942, age 2 years, on top of a haystack
Margeurite Johnson 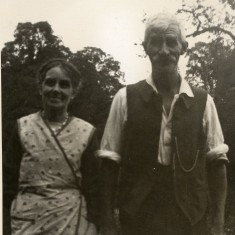 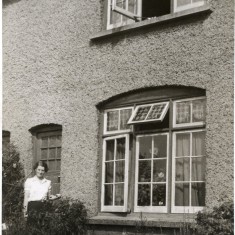 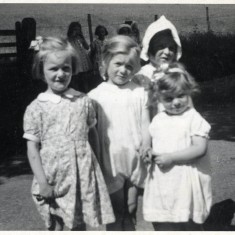 Margeurite and friends on the farm
Margeurite Johnson

Auntie Elsie, mum Edith and I, Margeurite, went from Tottenham Hale train station to to Braughing station. We were met by Mr Ginn with a pony and trap. Mum and Auntie sat in the back, with the suitcase, and I sat at the front, holding the reins with Mr Ginn. Mrs Ginn cooked big old potatoes with their skins on, and baked her own bread, in a big black oven range. There was a donkey in the field, which I was told not to try to ride. I tried to ride it, it threw me down the bank into the stinging nettles. Mum and Auntie took me to stay with Mr and Mrs Ginn a few times during the war, while my father was Gunner Holding in the Royal Artillery.

I can remember walking down the lane after it had been raining. The cottages that lay back on a bank and had a little brook running in front of them. Although I was very young, and an only child, I had a very happy childhood.   My husband and I, over the years, have been to The Swan Tea Shop in Hare Street. We’ve been inside Great Hormead church and I’ve walked round the churchyard. There’s something about Great Hormead, Braughing, Brent Pelham and Buntingford where I would feel at peace and remember happy childish things.