You are here: Home>Herts history>Places>Farms>Women and Farmers in WW1 ... and Penguins

Women and Farmers in WW1 ... and Penguins 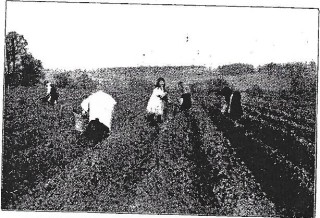 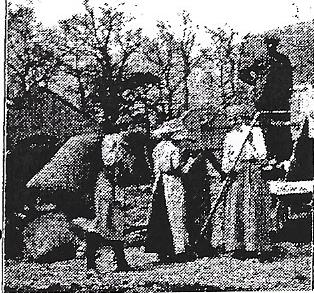 In June 1916  Colonel and the Hon Mrs Abel Smith offered the use of a furnished house in Stapleford to be used as a training centre for young girls in farm work, under supervision of a Forewoman.

The Women’s Agricultural Council engaged Mrs Lynch (recommended by the Land Service Corps) as Forewoman at a salary of 30 shillings a week (paying back 10 shillings for her board) and a general servant, to do the cooking and heavy work, who would be helped by 2 girls in rotation.  Extra expenditure of £2.10s. 0d was authorised when the Forewoman asked for a bicycle to enable her to visit the farms where girls were working.

It was recorded (HALS/AEC/8) that the girls “rise at 4 o’clock and go to bed at 8.  They are given a cup of tea and bread and butter before starting out in the morning, come in to a good breakfast at 8.30, resume their work at 10 o’clock; have a light lunch outdoors and come in at about 5.30 to a meat supper at 6.  In spite of the very early rising and rather long hours all the girls have kept in good health.”

In practice, those who had been trained and allocated to a farm did not all  enjoy good health with complaints about the difficulty of getting clothes dried, a  leaking roof with blankets damp and a girl contracting a skin disease through sharing a bed with another.  Although the Welfare Committee had insisted on a separate bed being provided for each worker they also recognised the practical problem – cottage people had only one large bed available rather than two small ones.  One farmer did not retain the girl he had trained as she was an educated girl and he did not think his accommodation arrangements suitable.

The Council had some firm views on the intelligence and competence of the girls and women.  They noted that the Board of Agriculture was encouraging the distribution of the Board’s pamphlet “Cleanliness in the Dairy” amongst women dairy workers, but the ladies of the Council were of the opinion that no very useful purpose would be achieved by distributing this pamphlet as it was rather above the heads of most of the women and girls taking up dairy work.  They directed that a copy of the pamphlet should be sent to Mrs Lynch and that “she be asked to explain it to the girls in a popular form”.  The next meeting noted that the leaflet had been much appreciated by the Stapleford girls who had all asked for a copy of it.

In January 1917 it was noted that one of the girls was working with horses instead of cows.  She was described as a very strong, tall girl, about 6 foot high and was bent on the horse work and convinced she could do it.  The Council were are glad to report that in this instance their decision seemed to have been justified as the girl had been grooming, feeding, harnessing the horses, working with them at carting and, before the severe weather set in, was beginning to shape well at ploughing.   However, the minutes record that “We feel however that this case cannot be taken too much as a precedent as the girl is undoubtedly an exceptional one”.

The Hertfordshire Mercury recorded the success of women undertaking farming work but there were also voices of dissent.  The 4 October 1916 meeting noted that one girl was under notice to leave “although her work gives satisfaction, owing to the dislike of the men on the farm to working with a woman”.  The following year the Hertfordshire Women War Agricultural Committee wrote to the War Agricultural Committee about the difficulty in placing trained girls on farms as demand from farmers was falling off as many preferred to under farm than resort to female labour.  They also referred to the ease with which exemptions were being granted by tribunals

However, there is evidence that the local tribunals were taking a tougher stance.  The Hertfordshire Mercury reported one such case in April 1917.  Mr Dover was supporting his cowman’s appeal against conscription.  He was told that there were women available to take his cowman’s place.  Mr Dover’s view was that he had not tried a woman as he had been told that they were no good, there was no place to accommodate a woman and he would not have one.  If the cowman went, he would sell his cows.  The appeal was dismissed.

Some girls were not retained for reasons such as “not dependable” and “inclined to be flighty and rather noisy”.   A farmer at Redbourn reflected that he welcomed girls but he needed men to do the heavier work, besides which retention of women was difficult.  He and his wife had trained twenty and only two remained on the land – and they only came out when the weather was fine.  Of the others – one went to a bank , another moved to Swanley as a gardener, one got married, some were nursing in Salonika and France and …. two had joined the Penguins!

What were the Penguins?

The Times for 12 February 1918 reported that Princess Arthur of Connaught had opened an exhibition and series of lectures at Harrods in Brompton Road to celebrate the work of the Women’s Army Auxiliary Corps, the Women’s Royal Naval Service and the Land Army in order to encourage more women to enlist.  (It was reported that 7,000 had been recruited to the land army in 1917 but 12,000 more were needed immediately).  A message was read from Sir Douglas Haig recording that “our splendid women, in standing by our hard pressed men in France, had proved themselves a power and a force far exceeding their actual numbers”. Much was said about the work of the WAAC and the Wrens and it was announced that a women’s force was to be set up to support the Royal Flying Corps and that they would be called the “Penguins”…. presumably because they would not be able to fly.

In spite of that, the farm girls from Redbourn may have considered that becoming a batman to a flying officer might be more attractive than weeding turnips.