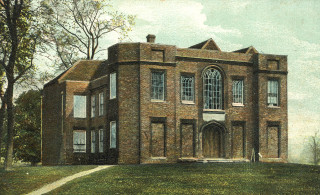 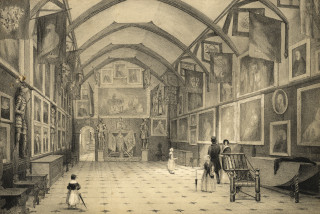 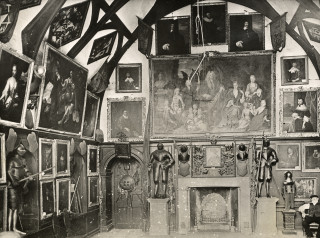 The banqueting hall in 1910. The caretaker is sitting on a chair to the right.
Hertfordshire Archives & Local Studies (D/EHwZ8) 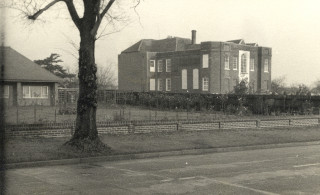 1960. The bungalow to the left had just been built for the caretaker of the private member's club that never was
Hertfordshire Archives & Local Studies (D/EHwZ8) 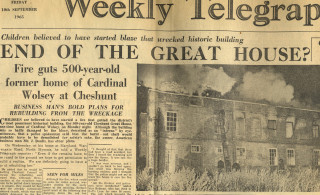 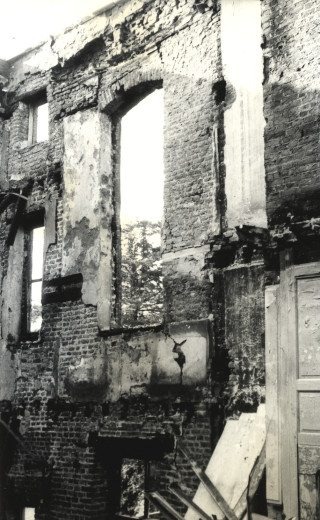 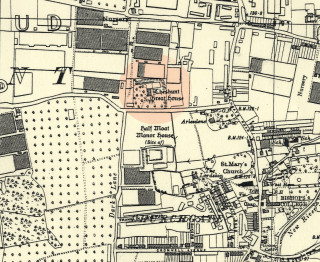 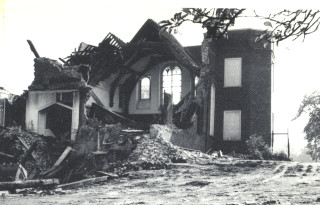 The Rosedale estate along Goffs Lane at the junction with Churchgate hides the remains of one of Hertfordshire’s most famous and historically significant houses, Cheshunt Great House.

Built in the 15th century, the house was reputed to have been owned by Cardinal Wolsey along with many other distinguished people.  It was originally shaped in a quadrangle and had over 40 roooms, including a magnificent banqueting hall.  In the 1750s, it was remodelled and encased in red brick.

For most of the 19th century it was owned by freemasons.  Later, part of it became a museum and visitors were shown the vaulted cellars where some skeletons were found in the 1880s.  The stories of ghosts, murders, secret tunnels and bloodstains were legendary.

In 1952, the house was described by its owner, Reverend B J Haddad:

“The main staircase is a splendid specimen of joiners work, also in carving and tuning.  In all, there are 14 large and small rooms apart from the banqueting hall and chapel.  There are also several wide passages, a bathroom with electric water heater and three other places of convenience, a large garage, summer house and two glasshouses.  The entire interior walls are pannelled throughout with wood from the time of Queen Anne.  The grounds, which measure about two square acres contain an orchard of fruit trees, a flower garden, a kitchen garden and many other trees of various kinds including oak.”

It was described by others as “the ugliest house in the district”.

During the Second World War, the house was occupied by the Home Guard and in 1959 was bought by a couple who planned to restore and open it to the public.  The Potters, who were art dealers, spent a lot of money on restoring the house as it had become quite dilapidated.  Their vision never really came to fruition and it was sold in 1964 for £10,000.  The new owner planned to turn it in to a private member’s club and was met with some opposition from nearby residents.

Although some work was done on the house, it stood empty for a while.  Security of the site was non-existent and it soon became a favourite place for gangs of children to play.

The 1960s and a mysterious fire

Late one Monday night in September 1965, flames were seen coming from an upstairs window.  The fire quickly spread and within five hours, the whole house was completely gutted.  As it burned, the owner optimistically commented that “the old girl would be re-built”.  Sadly, this was not to happen as the walls were too unstable to be retained and gradually they were demolished. The fire was thought to have been started deliberately.  It was a shame that six hundred years of history came to such a quick and devastaing end.

Shortly after, the site and surrounding nurseries were aquired by the London County Council for re-development and all traces of the once “Great House” disappeared.

Did you ever visit the house or do you remember the fire?