Events from the Illustrated London News

The Royal Visit to Hatfield House 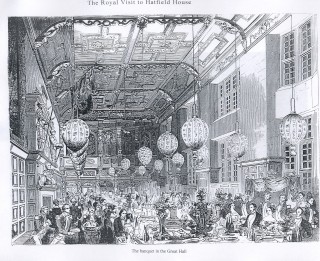 When the royal party came within four miles of Hatfield they were met by the Duke of Wellington, Lord Charles Wellesley and Lord Robert Cecil on horseback who then guided them towards the entrance of the park. Once there, the royal party was recieved by a guard of honour made up of the local regiment as well as two companies of the South Herts Yeomanry. The Queen was personally greeted by the Marquis of Salisbury and his two daughters. Following the reception the royal family retired to their apartments.

Later that evening, an extravagant banquet was held in the great hall, with the entire room lit by traditional chinese lanterns and all the attendants in full uniform. The banquet was ended with a toast to the Queen and Prince Albert. The evening was then spent in after dinner company before the Queen and her staff retired. On the Friday, the Queen and Prince woke early as a large crowd had gathered outside. After breakfast, the Prince and the Gentlemen spent the morning shooting.

Following lunch the Royal couple passed the crowds to visit the royal oak. This was followed by a visit through the gardens, of which the Queen was most impressed. They then spent the rest of the day touring the ancient parts of the palace.