How did the Great Nast Hyde get its name? 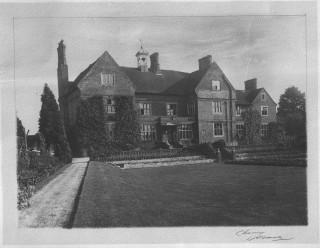 The Great Nast Hyde is one of those red brick houses that is part of the English countryside. It cannot be seen from the entrance to the drive. The house is located nearly two miles to the east of St Albans on the main Hatfield road. A very good view of the house can be seen from the rear from Wilkins Green Lane.

This charming old house, surrounded by pleasant lawns and gardens, dates back to the early 1600s. It is built on an H plan with the west wing being added in the 20th century. The space between the wings on the north side is occupied by an entrance hall.

The original hall, with its panelling, is preserved, as is the wide staircase with its solid balusters. The old fireplaces and woodwork gives the large and well proportioned rooms a certain character. Beams can be seen in the walls of the rooms on the second storey. There is a dovecote in the end of an old barn in the gardens. A pond, traditionally called ‘Monks Pond’, has been filled in.

On the gabled roof is a small signal tower which still contains a bell. It is said that the tower once had a revolving lamp to guide travellers across Colney Heath. This open area was once a very dangerous place to wander.

It is thought that Great Nast Hyde has always been a farmhouse. After the Dissolution of the Monasteries around 1540 the land was vested in the farmers, among whom were the Kentish family. Later the house was occupied by the Hart-Dyke family. In around 1920 a London stockbroker acquired the house. The house was requisitioned by the nearby De Havillands aircraft manufacturers at the start of the Second World War. They used the house as a guest house for long term visitors to the company. In 1991 the house was repurchased by a decendant of the De Havilland family and reinstated as a manor house.

Clues in the brickwork

Not only is the date of the house supported by documentary evidence, its red brick construction helps us. What is now the back of the house has its brick laid English Bond style with alternate rows of bricks laid lengthways then widthways. In the reign of King William III the Flemish Bond was introduced which meant alternate lengthways and widthways bricks in the SAME ROW. The front of the house is laid in Flemish Bond.

How was it named?

Now to the origin of the name of the house. This is a bit of a mystery. A hide (Hyde) means ’as much land as would support a free family’. Nast is supposed to mean ‘a place for mooring ships’.