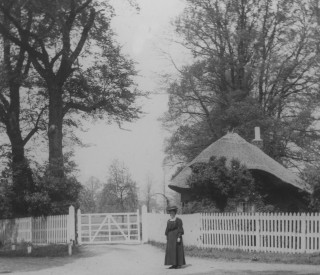 The manor of Cheshunt Park has played an important role in Cheshunt’s history since mediaeval times, and was for a while the home of the descendants of Oliver Cromwell, Lord Protector of England – a more detailed account can be found here. The fine house built in the late 18th century by another Oliver Cromwell was demolished in 1970, and little remains of the estate, other than the Lodge.

Standing on Park Lane, the Lodge is a 17th century building, and may be one of two “lodges” described in a survey taken during the Commonwealth period (1649-1660) of the royal manor of Theobalds, to which Cheshunt Park was linked.

The building is a 17th century timber-frame cottage, possibly originally a gamekeeper’s lodge.  It was converted in the early 19th century into a Cottage Orne style lodge, with a curved upper storey projected on seven pillars.

The Lodge isn’t one of the larger or more magnificent of the borough’s listed buildings, but both its age and charm make it fully deserving of its grade 2* status.