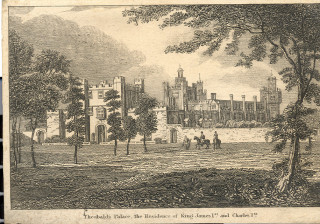 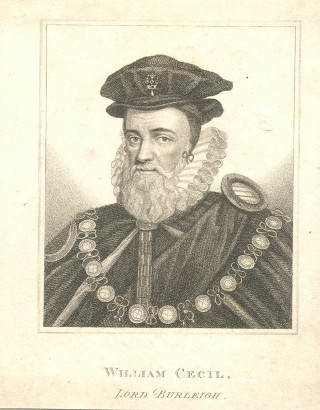 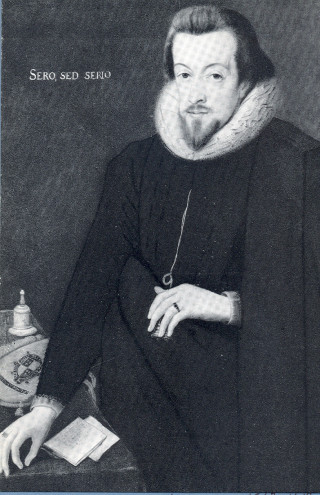 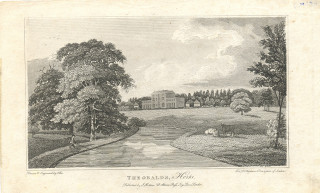 Theobalds, a manor lying on the borders between Cheshunt and Waltham Cross, has a long and illustrious history.  Also known as Tibbolds and Thebaudes, it was first mentioned in 1441, when the manor was granted to John Carpenter, John Somerset and John Carpenter the Younger.

The Cecils at Theobalds

Sir William Cecil, the Lord High Treasurer of England, acquired the manor in 1564 and had a house built, which soon after received a visit from Queen Elizabeth.  She was so impressed by the house and its surroundings that Cecil (later Lord Burleigh, perhaps the greatest statesman of his age) replaced the modest building with a palatial house.  Elizabeth visited after its completion in 1571, and thereafter was a frequent visitor, including a four-day stay in 1583, accompanied by a huge retinue.  During a stay in 1592, she knighted Burleigh’s second son, Robert Cecil, who was later to become the First Earl of Salisbury.

After Lord Burleigh’s death in 1598, Theobalds passed to Sir Robert Cecil, while his elder son inherited the title and Burghley House (using an alternative spelling of the name).  Cecil inherited his father’s position of Lord High Treasurer under both Elizabeth and James I, whom he entertained lavishly on his way south to accept the crown in 1603.  It was at Theobalds that James received the homage of the Privy Council.

James Stuart was as taken with Theobalds as Elizabeth had been, and went one step further.  In 1607, he persuaded Cecil to exchange the property for Hatfield House, the family’s seat ever since.  Although Hatfield was a larger and more valuable property, both men regarded Theobalds as the greater prize.

Theobalds became one of James’s favourite residences, and he spent much time there.  One of his most memorable stays was when, in 1614, he entertained the King of Denmark there; the visit lasted a fortnight, amid continual feasting and revelries.  He also set up a menagerie in the grounds, which included elephants and camels.  However, the King’s residence wasn’t universally popular locally, since he enclosed a good deal of local common land.  In 1620, he built a wall around his estate, parts of which survived well in the 20th century.

James died at Theobalds in 1625, and his son was proclaimed Charles I at the palace’s gates.  Charles maintained Theobalds as a royal palace, although he paid it less attention than his father had.  Nevertheless, in 1642, after his catastrophic attempt to arrest the Five Members in Parliament, Charles withdrew to Theobalds to plan his next move.  After a short stay, he set off northwards to raise his standard at Nottingham, setting off the Civil War that would end, seven years later, with the King’s execution and the setting up of the Commonwealth, under Oliver Cromwell.  Ironically, Cromwell’s son and successor Richard, briefly Lord Protector of England, later retired to live quietly in Cheshunt, less than a mile from the palace of his father’s adversary.

A 1650 parliamentary survey of the estate, which estimated its size as over 2,500 acres, was followed by the palace’s demolition the following year.  Three smaller but substantial houses were subsequently built on the estate: Old Palace House, Grove House and the Cedars, utilising some masonry from the palace.  All three are now demolished, but Old Palace House was, in the early 18th century, the home of Dr Isaac Watts for some years.

In 1763, George Prescott built Theobalds House, which still stands.  In the late 19th and early 20th centuries, it was owned by Sir Henry and Lady Meux who, in fine Theobalds tradition, entertained Edward VII there, along with many other distinguished guests.  Since the death of its last occupant, Sir Hedworth Meux, the house has been a hotel, a school and an adult education centre, among other uses, and is now once more a hotel and conference centre.

The manor of Theobalds descended separately from ownership of the house.  In a final irony, the manor passed in the late 18th century to one Oliver Cromwell, great-grandson of his more famous namesake.