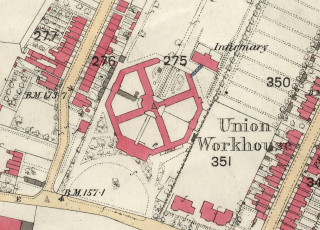 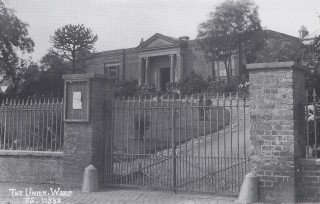 Ware Union workhouse in the 1930s
Ware's Past in Pictures 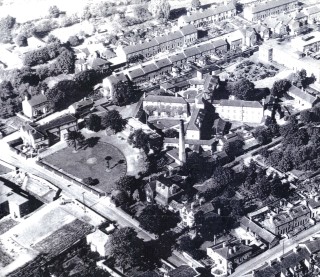 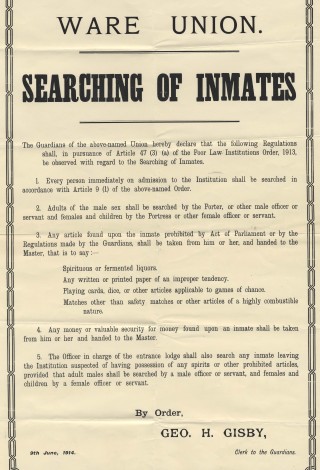 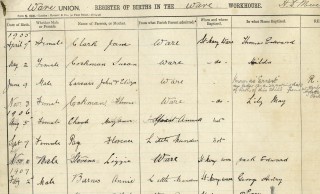 Page from the Register of Births in the Workhouse, 1905
Hertfordshire Archives & Local Studies 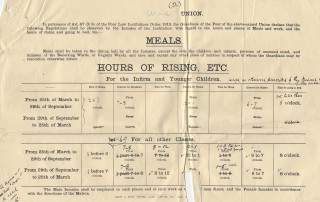 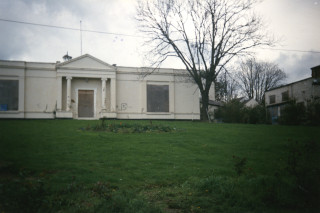 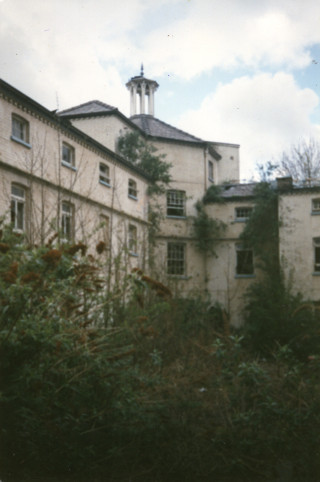 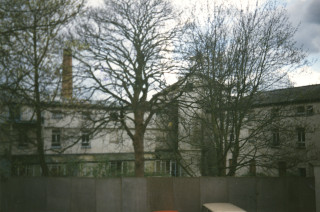 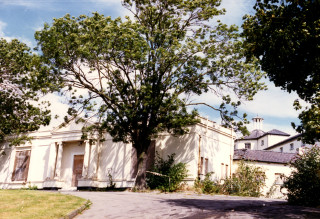 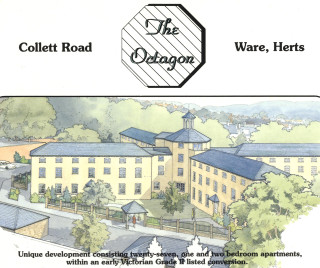 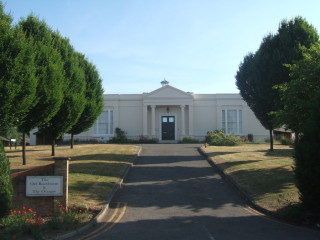 The ‘workhouse’ was a word that sent a shudder through every generation up to the Second World War. They were harsh places where those unable to support or care for themselves could end up living and working.  Inmates were usually old and infirm, sick and poor, orphans and unmarried mothers. It was always a last resort and would have been a distressing and degrading experience.

Ware’s workhouse loomed high above the town and served as a reminder of what would happen to you if you became destitute and had to rely on the state.

In 1723, the first workhouse was situated on the corner of Crib Street and Collett Road.  Initially, it accommodated 30 paupers or inmates. By the early 1830s there were nearly 400 inmates and a new one needed to be built.  Others claimed “outdoor relief” for clothing and food but lived in their own homes.

In 1839, a new workhouse was constructed on a piece of land in Homefield at the cost of £600. It was self-sufficient but meat and coal were supplied by the lowest tender. The building was in the standard ‘radial star’, similar to prisons. There was an entrance block, a porter’s lodge, the Guardian’s Boardroom and waiting rooms at the front; kitchens, a laundry and mortuary at the back with four accommodation blocks radiating from a central supervisory hub.  This way, the master could keep an eye on everyone in the yards below.

Life inside was cruel and hostile. Families and married couples were separated. Everyone was expected to work long hours and do difficult jobs in return for food and a bed, such as breaking stones and scrubbing floors. In 1927, Workhouse Master, Mr Dorrington was sent to prison for six months for spending money intended for inmates.

In 1939, 202 residents of Barnet workhouse were evacuated and housed at ‘Deerfields’, a large red brick building which used to stand opposite. (Hartfield Court now stands on the site). This came to be known as ‘Barnet Block’ and housed casuals or tramps; men who trod from place to place looking for work and somewhere to sleep. Deerfields was demolished around 1990.

In 1948, the NHS took over the running of workhouses and the poor law was abolished. Many became hospitals for the elderly, general hospitals or were demolished. Ware Workhouse was re-named ‘Western House’ in an attempt to shake off some of the stigma. Many elderly people were terrified of entering them as inevitably, you would never come out. One man who used to work there in the 1950s remembered the appalling conditions of some of the wards, the lack of privacy or even curtains. Many patients had mental health issues and some were as young as forty.

The end of Western House

In 1975 the original building became listed but despite its protected status it became run down and was finally closed in 1983. There were proposals to convert it into a hostel for the homeless in 1988 but it never happened. A small part built in 1935 at the rear remained for a few more years as Western House. The main building was boarded up and gradually became derelict and overgrown.

It was an appealing place for me as a 14 year-old to explore with friends and be frightened by ghost stories. The dark and damp corridors with their peeling paint, small broken windows and faded Christmas decorations fluttering in the breeze added to the desolate atmosphere. The kitchens still had a couple of enormous walk-in fridges and chairs were set out in the lounge as if the occupants had just left. Piles of dusty old clothes, books and shoes lay abandoned in the bell turret which was accessed through a tiny narrow door. They probably belonged to those who had died but had no relatives to collect them. The yards were covered with weeds, broken glass and mangled wood. The boiler house was dark and creepy, its red brick tower visible for miles.  The cellars were like a maze and seemed to go on for ever. Strange noises and footsteps or a shadow moving in the corner would make us run away to the safety of the street. Somebody fell through a floor once but we’d still go back, even though it was dangerous (and scary) and we were told off by our parents and the neighbours.

A new lease of life

In the 1990s, work began to convert the building main in to 33 luxury flats and thankfully it was saved from further deterioration. Opened in 1995 and now known as the Octagon, some residents may not know the purpose for which it was intended.

The surviving records of the workhouse (up to the 1940s) are at Hertfordshire Archives & Local Studies. Some later records for Western House can also be found there.  Some names from early registers have been indexed on Hertfordshire names online. For more information on workhouses, see the excellent http://www.workhouses.org.uk/