But the murderer escaped 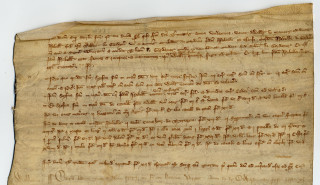 This case from a Leet court held at Walkern on 26 June 1337 shows that justice was seen to be done even though the offenders escaped from the county.

The Jury have to present that they have been unable to apprehend the suspects in this case.  As a result their possessions are forfeit to the lord.  These include land with standing crops, animals and a variety of personal possessions.

The jury say on oath that on the Saturday after Trinity Sunday in the eleventh year [21 June 1337] William le Maners came with force and arms to the house of Isabel, formerly the wife of Robert le Gardyner, and there in the garden of the said Isabel, and with her assent, wounded and killed Thomas le Gardyner with bow and arrows, and escaped through the lane at the bottom of the garden which once belonged to Robert le Gardyner.  And that the aforesaid Isabel was the guardian, harbourer and supporter of the same William, and after the said deed she fled to the church.  And after this the said Isabel fled from the county.

Item one messuage, 3 acres sown with wheat and half an acre sown with barley seized into the lord’s hands which Isabel held.