manorial court held for the tenants 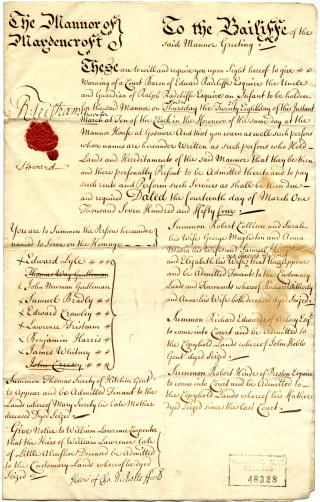 Charge to the bailiff to require him to summon a Court for the Manor of Maydencroft. The courtwas to be held on 28 March 1754
Herts Archives (48328) 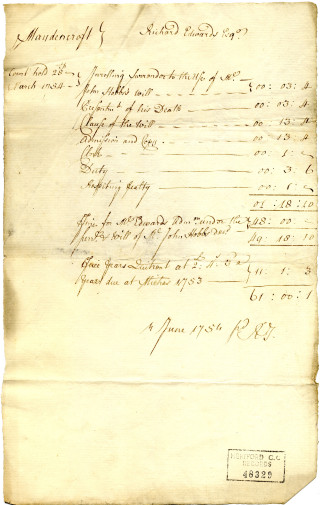 This was the manorial court held for the tenants.  It was regulated by the customs of the manor which varied from place to place.  The court settled any disputes or complaints about their tenure and prosecuted any tenant who failed to render the proper services due to the lord.  A tenant had to seek permission to sublet, exchange lands or include his manorial property in his will, and the court ensured that the lord’s financial interests were preserved.  A tenant’s right to hold his property was written on the manor court rolls, of which he had a copy – hence the name copyhold.

The procedure of the court was accompanied by various formal ceremonies:

The JURY or HOMAGE (homagium) was first called and sworn in to ‘determine, injuries, trespasses, debts and other actions’.

The ESSOINS are listed, that is, all the names of the tenants who have sent their apologies for absence.

PRESENTMENTS are dealt with next.  These are the reports or accusations made to the steward by other manorial officials.  The Jury would make decisions based on the customs of the manor.  An accused person could produce witnesses who were prepared to swear to the truth of his story.  If found guilty by the Jury personal property could be seized, or the offender would be required to find personal pledges who would suffer penalties if the offender failed to attend the next court to submit to the court’s ruling.

An outgoing tenant SURRENDERED to the lord and the new tenant was said to be ADMITTED BY THE ROD (per virgam).  This is a reference to the stick, or rod, carried by the steward which the tenant had to touch in a formal ceremony of admission.

Once the formal business of the court had finished, some sort of festivities usually followed. Farmer John Carrington of Bramfield writes in his diary that on 16 June 1800 he attended the manor court of Tewin but there was no business ‘only good dinner’.

FINE : an agreed sum of money payable to the lord in order to conclude a case or transaction presented before the manorial court.

HERIOT : this was the payment exacted by the lord on the death of a tenant.  The heir who wished to take over the property had to surrender his best beast or in later centuries a substantial money payment.

CHEVAGE (capitagium): permission to live away from the manor, to send a son to school or to enter holy orders.

MERCHET : permission to allow a daughter to marry.

LEYRWITE : unmarried woman’s unchastity.   The court baron also regulated local agricultural practices for example the common grazing, and gleaning rights and would prosecute tenants for trespass or encroachment.  The lord’s officials such as the reeve or hayward were also elected by the court.