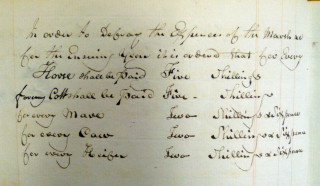 Record from a meeting of the annual Court Leet at the Liberty and Manor of Cheshunt, 1820 (DZ/39/M1)
Herts Archives & Local Studies

This court had to be held twice a year but although considered to be separate from the Court Baron it was usually held on the same occasion.  Sometimes a different jury was appointed for the Leet known as the juratores pro domino rege – literally the jurors for the Lord King as they were responsible for the King’s peace.  However, often the same people would perform the duties of the homage (Court Baron) and the Leet Jury.

Not all manors had the power to hold a Leet court as the jurisdiction to try breaches of the peace had to be specifically granted by the King.  Some manors even had the right to maintain a gallows and to hang offenders.  This right was lost in 1461 when it was enacted that all serious cases had to be tried before the Royal Court.

The longest surviving right of this court was the right to maintain the assize of bread and ale – that is to regulate the quality and price of bread and ale for sale – the forerunner of our modern trading standards.  An ale-taster (tastatores cervisie) would be appointed to monitor this.  In addition the court enquired into and dealt with various nuisances from polluting trades such as butchers and tanners who would leave refuse in the streets, and would also appoint the local constable.  Later statutes gave the Leet court further duties, for example in 1541 to enquire into the playing of unlawful games, in 1555 for the upkeep of roads and in 1607 the regulation of drunkenness.  However the growth of local government based on the parish, which developed in rural areas such as Hertfordshire from the end of the sixteenth century, meant that the Leet courts gradually faded away.  The parish authorities became responsible for appointing the constable and the Quarter Sessions looked after bridges and roads.

The Leet Court could exact a PENALTY (pena) on anyone who failed to comply with a court order.  This could be a substantial sum of money.  A smaller payment known as an AMERCEMENT (amerciamentum or misericordia) was exacted if the offender admitted his wrongdoing.  Literally he placed himself on the Lord’s mercy – ponit se in misericordia.  The amount of the amercement was fixed by officials known as AFFEERORS (afferatores) who were chosen from the manorial tenants.  Sometimes instead an annual payment was demanded (certum) for example by those who brewed ale for sale who made a regular payment in effect for a licence to do so.