You are here: Home>Herts history>Places>Manors>The Dissolution of St Albans Monastery, 1539

The Dissolution of St Albans Monastery, 1539 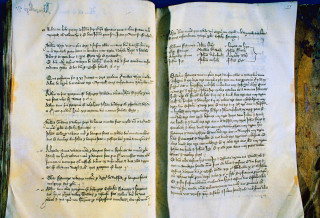 This court book from the Manor of Kingsbury contains records of the manorial court from 1240 to 1331.  The court met at Westwick, Childwick or Kingsbury.

It is one of the series of books copied up at the abbey in the 14th century from the original court rolls, none of which appear to have survived.  This volume with its contemporary tawed leather and board binding still attached would have originally held records for several manors belonging to the monastic estate.  After the Dissolution of the Monastery it was torn apart so that the records for individual manors could be given to the new estate owners.