A fine for non-attendance 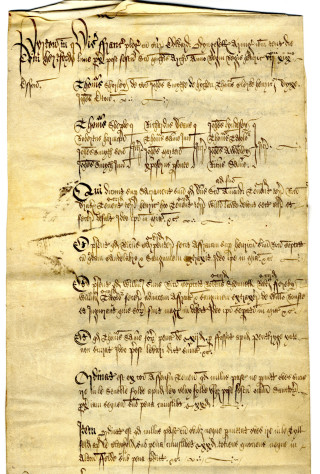 By the fifteenth century the manor had become defined in law as a piece of landed property with tenants over whom the lord exercised certain rights in his private court.  This manorial court was usually held every three weeks.  The lord used the court to enforce the payment of all dues and the performance of all services owed to him by his tenants.  Some courts had powers to settle local disputes and appoint officials such as the reeve and the constable.  In principal all tenants were obliged to attend the court and were fined if they did not.

By the eighteenth and nineteenth centuries the court tended to meet much less frequently – a long gap in a series of court records need not mean that any have been lost. Manorial courts were gradually declining as lords transformed their holdings into freehold tenure.  Copyhold was finally abolished under the Law of Property Act of 1922.

Following this Act, manorial records in England and Wales were to be protected to ensure their continued preservation.  Lists of surviving documents and their locations are now held on the Manorial Documents Register at The National Archives.