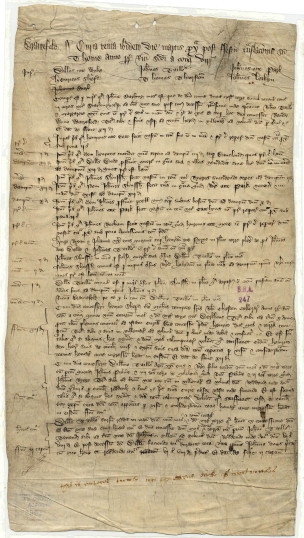 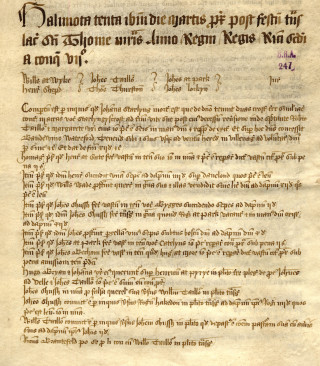 The abbey’s officials compiled composite court rolls for the manors for which they were responsible and they were stored in the stable in the courtyard of the Abbey.  They must have been very confusing to use as each roll contained the records of several different manorial courts.  Referring back to individual entries on the rolls for evidence of customs and tenancies must have been very difficult.

At a date soon after the Black Death the abbot made the decision to copy out the rolls into a series of books which then would be used as the evidence needed in any court case.  The result is some of the finest manuscripts held by Hertfordshire Archives containing evidence for the St Albans Abbey manorial courts from 1237 (Hexton).

During the Peasants’ Revolt the rebels demanded the manorial records be released to them and many rolls were subsequently burnt.  The books, however, remained secure, and although rolls continued to be compiled after 1381 very few are known to have survived.

This fragment for the Manor of Bramfield is for a court held in July 1383.  The details are copied into the book on the right hand page beginning with the list of jurors: William at Wyke, Henry Shepherd, John Taillor, Thomas Thurston, John at Park and John Lorkyn.  The court session begins with the report of the death of Joan Starlyng who has died holding two crofts of land containing three acres called Starlyngyscroft.

The note at the bottom reads: ‘This is entered truwly into the great book of court recordes’