What is a Manor? 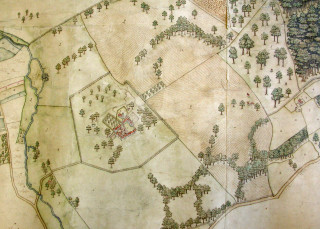 Map of the Manor of Digswell, 1599
Hertfordshire Archives (DE/P/P1)

The origins of the manor are uncertain, but by the time the Domesday Book was compiled, in 1086, the manorial system was established throughout most of England.  Today we think of a manor as a large house owned by a fairly well-to-do country gentleman.  But in medieval times the word manor meant a single administrative unit of a landed estate which may or may not have included a dwelling house for its lord.

An entire village in a manor

A large estate could consist of many manors – for example the Abbot of St Albans held at least 35 manors across Hertfordshire and Buckinghamshire.  Some manors included an entire village or parish where the manor house and its farm buildings would be the home farm (manerium dominicum), while the villagers would hold small amounts of land as subtenants paying rents in labour, produce or money.

In Hertfordshire the village of Pirton was almost equally divided between three manors – Pirton, Pirton Doddingsells and Pirton Rectory.  The manor of Digswell covered the entire parish and a map of 1599, which survives amongst the archives, shows the lord’s house and farm buildings near the church surrounded by a fence.  From the earliest times the manor was a very useful unit through which a lord would manage his properties, collect his rents and organise local agriculture, and in addition administer any judicial rights he had over his tenants.