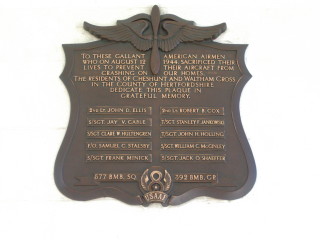 On the 12th August 1944, a US Air Force B24 Liberator bomber crashed on farmland near Cheshunt, killing all ten airmen on board, an incident commemorated in the name of a nearby road, Lieutenant Ellis Way.

The plane, commanded by 2/Lieutenant John D. Ellis, was based at Wending, Norfolk, and was part of 577th Squadron, 392nd Bomb Group, scheduled to carry out a bombing raid against Juvicort Airfield in France. Ellis’s plane was one a six forced to turn back, due to adverse weather.

Beliefs about the Crash

Like most facts of this case, what happened to the B24 is subject to debate.  It was widely believed to have suffered a mid-air collision with a B17 Fortress of 398th Bomb Group based at Nuthampstead, Herts, which crashed at Loudwater, near High Wycombe.  This, however, has been disputed by some investigators.

For whatever reason, the bomber suffered catastrophic damage, probably with the loss of all four engines.  It emerged from the low cloud-cover near Cheshunt and crashed into a field belonging to Maxwells Farm.  The plane caught fire and exploded, killing all ten crewmen.

In the days that followed, it was widely believed that Lieutenant Ellis and his crew had deliberately steered their plane away from the built-up areas of Cheshunt and Waltham Cross, sacrificing their chance to bale out in order to safeguard the civilian population.  This too has been disputed by some experts, who believe that Ellis could not have been in control of the B24 at that stage, but the belief became too rooted in Cheshunt to be shaken, and the truth will probably never be known.

Whatever the circumstances, the crash resulted in no civilian fatalities, although a girl was hit by debris and spent several days in a coma. The Cheshunt Fire Brigade attended the crash and, since they had travelled a mile to reach the site before the plane exploded, there must have been a considerable gap between the crash and the explosion.

A collection was made in Cheshunt and Waltham Cross, partly for the dead airmen’s families and partly to create two memorials, one of which (pictured) hangs in Cheshunt Library, the other in the Cambridge American Cemetery and Memorial in Madingley, Cambridgeshire.

On the 50th anniversary of VE Day, 1995, the nearby Flamstead End Relief Road was renamed Lieutenant Ellis Way, in honour of the men who died that day, and a memorial at the site is planned.

The following men died in the crash: