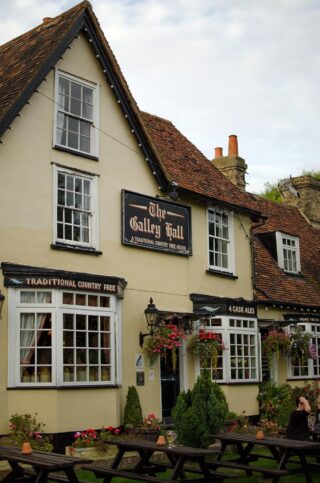 A small village just within the north-western boundaries of the Borough of Broxbourne, Hailey is associated with the well-known public school Haileybury to the west, just over the border into East Herts. Its old manor house, Hailey Hall, has now been replaced by Hailey Hall School, a Special School for boys with various difficulties.

However, this charming little village, tucked between Ware Road and the A10, also includes four listed buildings.

Previously a large farmhouse, originally called Collewelle Haw but later changed to Galley Hall, there’s been a building on this site since at least the 14th century. The current building, however, dates to the 17th century, altered and extended in the 19th. An east block, converted from three adjoining cottages, has been added.

It was bought in 1837 by the Hoddesdon brewers Christie and Cathrow, though it may have operated as a beer house before that. In the 1841 census, the landlord is named as Benjamin Logsdale, and the property has remained a thriving pub ever since. It currently provides a full menu for diners, as well as a function room for hire, and hosts regular music nights.

Galley Hall’s listing describes it as:

Like Galley Hall, Hailey Cottage is on the north side of Hailey Lane, the main road through the village, though it’s hard to see from the road. Dating from the 16th century, with additions in the 17th and 19th, it’s listing describes it as:

Standing at the junction between Hailey Lane and the smaller Springle Lane, Rose Cottage is an attractive 19th century house whose white façade is clearly on show from the road. Despite its name, Rose Cottage is actually quite a substantial house, with a chimney stack at each end of the roof. Its listing describes it as:

Just a few dozen yards up Springle Lane from Rose Cottage, Finches stands a little back from the road. At first glance from the road, it might be taken for a modern house, but it actually dates back to the 17th century. Its listing describes it as: