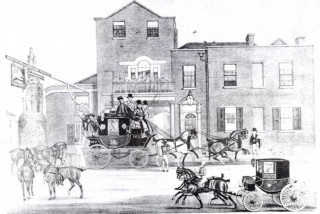 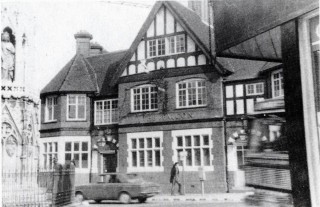 Licensed as the Falcon to William Foster in 1617, it appears to have been a small house at first, with stabling for only three horses. After 1756, it developed its post-chaise business and became a coaching stop. By 1830, the Royal Mail Coach from Hull, the fastest and safest mode of transport of its day, was stopping at the Falcon Inn as its last stop before London. 1889 saw the restoration of the Eleanor Cross and the Old Falcon Inn was demolished and rebuilt, in order to leave a roadway between the Eleanor Cross and the new hotel. The new Falcon Hotel became home to the South Herts Automobile Club. Sadly, the Falcon was pulled down in 1974 to make way for new developments