A poem that lists them all 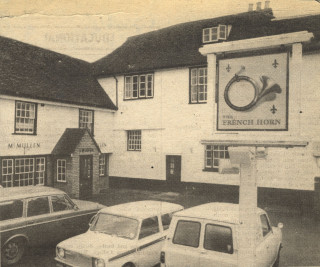 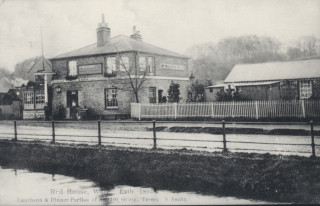 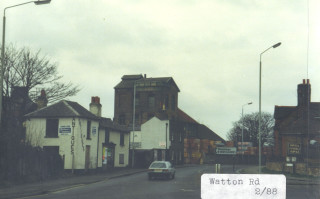 The Chequers, an antique shop in 1981

A poem found many years ago in the loft at a house in Hertingfordbury Road, Hertford, lists every public house [46 of them] in Ware at the end of the 1920s.  There was no indication of when it was written or by whom.

It’s said there are some pubs in Ware, well yes, there are a few.  This is the place where malt is made, so why not taste the brew?

In London Road, the ‘Red House’ stands, an ancient bike on high.  There are tea gardens at the side, so no-one need go dry.

The ‘Gilpin’ brings to mind the man and his historic ride.  The ‘Malakoff’ a foreign name, near the New River’s side.

The ‘Royal Oak’ will shelter give, no matter wet or dry.  Then cross to the ‘Railway Hotel’, where you can sleep and dine.

In Amwell End, the ‘Eagle’s’ seen, the ‘GeorgeInn’s’ on the right.  The ‘Bull’ keeps watch upon the bridge, for ‘Victory’ is in sight.

The ‘Star’ is seen both day and night, ‘Victoria’ welcomes all.  The ‘Angel’ says ye thirsty souls, there’s drinks for all who call.

The ‘Jolly Bargemen’ and the ‘Harrow’, no Quakers do they fear, the ‘Red Lion’in New Road don’t roar when ‘Silas’ brews his beer.

(a)   The ‘Bird in Hand’ just nestles down, next the ‘Saracen’s Head’, where years ago sale took place, of Ware’s most famous bed. (b)

The ‘Bell’s’ a pub near the pillar box, where bakers made their bread.  The ‘Old Bay Horse’ is still alive, good luck he is not dead.

In East Street is the ‘Dolphin’ seen, though he can’t swim at all.  The ‘French Horn’ with its corner pitch, is on the council’s wall.

The happy trio now appear, together in West Street.  The ‘White Swan’ with its music charms, its guests who nightly meet.

The middle house with boxing booth, is called the ‘Bell and Sun’.  The ‘Punch House’ where in days gone by, some funny deeds were done. (c)

The ‘Wine Lodge’ is a modern house, the former was burnt down.  There is a garden on the roof, the only one in town.

The ‘King’s Head’ is a royal name, where you can happy be.  Then plunge into the ‘Old Mill Stream’, with mill hands have a spree.

The two ‘Rose and Crowns’, old and new, can mournful tales relate. The ‘Brewery Tap’ and ‘Chequers’ point, the place for one ‘o’er eight. (e)

The ‘Bull’s Head’ is a house well known, the ‘Garden’ was a sight.  The ‘Wagon and Horses’ cars let out, for use both day and night.

The ‘Canon Hotel’ with lovely grounds, a posh club for the nobs.  The ‘Cannon Tavern’ near a spot, where horses are not cobs. (f)

In the ‘Cabin’ you may rest, the ‘Albion’ song may hear.  The ‘White Horse’ is a noble steed, the ‘Prince of Wales’ sells beer.

The ‘Volunteer’ in Jack Dye’s time, nicknamed the bandsman house.  The ‘Jolly Gardeners’ when at work, you never hear them grouse. (g)

The ‘Crooked Billet’ should do well, with council houses near.  For should the water tower fail, they can fall back on beer.

The ‘Rising Sun’ it sheds its light, upon both good and bad.  When Jack was chased right down the hill, he was partly clad. (h)

At ‘WindsorCastle’ we will stop and tally up our score.  Tis forty six but wait a bit, I think there is one more.

At this hotel all drinks are free, if you’ve no cash to spend.  The ‘Western House’ God save the King, and now the list must end. (i)

a) The Harrow and Jolly Bargeman were in Kibes Lane, demolished in the 30s and rebuilt on the King George estate. [The Harrow closed in 2011]

b) The writer saw the bed at the Saracen’s Head

c) At the Punch House, forty live rats were let loose in the landlady’s drawing room, all killed by dogs.  A resident would fill his mouth with live bees and let them out singularly among the customers.

d) The landlords of the Punch House and Ye Old Brewery Tap had only a six days licence,

h) At the Rising Sun, the landlord discovered a man in compromising circumstances with his wife.  He was chased down the hill with a whip, minus some of his clothes.  [Demolished in 2000s]

i) ‘Western House’ was the workhouse [now The Octagon]

2022 update – The Victoria, The Albion and The Jolly Bargeman have closed