You are here: Home>Herts history>Places>Pubs>Where was the Sawbridgeworth 'White Horse' inn?

Where was the Sawbridgeworth 'White Horse' inn? 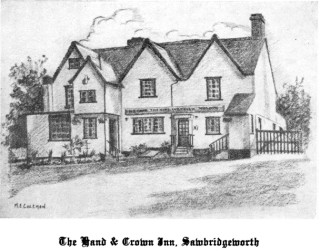 Before the additions!
Sketch by M E Coleman

Through the 17th and 18th centuries there were several inns in or around Sawbridgeworth associated with families by the name of Brett. In 1686 Thomas Brett paid Tithe for the White Horse and Widow Brett paid Tithe for the Katherine Wheel. In the Sawbridgeworth Parish Register for 1672 the daughter of “Gabriel Rubery, a traveller was baptized at Stephen Brett’s” and in 1694 & 1696 two baptismal entries refer to “..Stephen Brett albi equi …”.

From the 1620s Stephen Brett and descendants held several parcels of land on the southern fringes of the town by the High Wych road including Wisemans. The property later served as an inn and from 1721 is referred to as ‘The Hand’ in the Manor Court Rolls and continued in the same family at least until the late 1700s. Some siblings of my grt grt grandfather Benjamin Brett (born in Sawbridgeworth in 1770) were baptized “at the Hand” or “in Town”. Nowadays this is the public house known as the ‘Hand and Crown’.

So although I know where the ‘The Hand’ was located I would be very interested to know where the White Horse and the Katherine Wheel were. Could it be that what was later called The Hand was, in an earlier time, The White Horse or were these 17th Century Stephen Bretts different people?