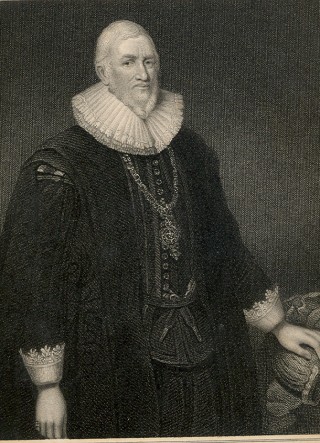 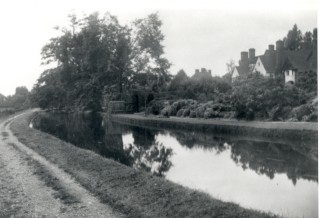 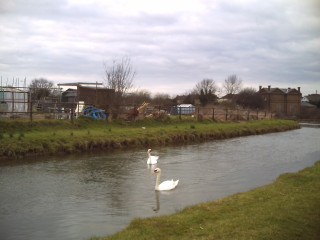 The New River, which flows through several Hertfordshire towns, was opened in 1613, and represents one of the most impressive feats of engineering in the county.

London’s water supply had traditionally come from the River Thames, along with various natural wells in the city; but, by the 16th century, problems had arisen with this. The population in the capital had grown, and the Thames was both a major shipping route and a sewer, along with a source of water, and disease was rife. The proposal to bring clean water into the city by building a “new river” was discussed as early as 1570, but it wasn’t till 1604 that Edmund Colthurst obtained a charter to build the river and carried out a survey.

By 1605, however, Colthurst had run into financial problems, and the project was taken over by Sir Hugh Myddelton (sometimes spelt Middleton), a Welsh entrepreneur whose interests range from clothmaking to banking. Myddelton set up the New River Company, along with investors known as “Adventurers” (including Sir Marmaduke Rawdon of Hoddesdon) whose shares were each valued at £336 in 1611, with no profit expected for twenty years. Myddelton also gave shares in the company to Colthurst.

Work began on digging the river on 20th February 1608, although the survey on which it was based was unfortunately lost in a later fire that destroyed the New River Company’s records. Myddelton too had financial problems, as well as strong opposition from some of the landowners along the river’s route, who feared their land could become waterlogged. Both problems, however, were solved when King James I threw his weight behind the project. He invested £6,347, 4 s and 11½d, in return for 50% of the shares, and opposition to a royally sponsored venture melted away.

In fact, the New River was to come near to killing James. A few years later, riding on a winter day on his Theobalds estate in Cheshunt, he was thrown by his horse headfirst into the icy river, with only his boots showing above the ice. One of his companions, Sir Richard Young, was quick enough to pull the King out before he drowned, but it was touch and go.

The river was begun at Chadwell, between Hertford and Ware, taking water from the natural springs there and at Amwell, although this was later to prove inadequate. A channel was then dug to take water from the Lea, and pumping stations were built along the route, tapping the water-table below the surface.

The river originally ran a total of 27 miles, looping around heads of tributary valleys to the Lea and carried over some lower ground by aqueducts built of wood and lead lined. The whole route was engineered with a constant fall of 5 inches per mile, allowing the force of gravity alone to create its flow.

The labourers Myddelton employed are recorded as earning 10d per day, with an extra 2d if they were working in water. Skilled men, such as carpenters, were paid 1s 4d a day, and bricklayers could earn 1s 6d. This compared well with average wages at the time, when an agricultural labourer could expect only 8d a day.

The New River ended in Islington, at a great cistern known as New River Head, from which pipes distributed the water through the city. A grand opening was held on Michaelmas (29th September) 1613, attended by the Lord Mayor and many dignitaries.

Myddelton was created a baronet in 1622, and died in 1631. It was many years, however, before the New River Company began to make a profit, and a rival scheme was proposed in 1631, but never built. Eventually, however, “Myddelton’s Water”, as it was sometimes known, proved its worth both in practical and financial terms. In 1898, a share in the New River Company sold for £128,500.

The New River has been considerably altered over the years. The wooden aqueducts were replaced with clay-banked canals, and several of the longer loops were straightened out. Notable among these were the stretch through Turnford, which had originally flowed in a long meander through Cheshunt Park, and the still-surviving New River Loop that flows through Enfield Town, although the river’s main route now bypasses this. From Clissold Park in Stoke Newington, the river is now underground, emerging only occasionally to form water-features in parks.

For much of the route, the New River’s service paths have traditionally provided local walks, and since 2003, a walkers’ route has existed for the entire length. Some of this is on rights of way, and the underground sections can be followed along streets and through parks, but the bulk is open by permission of Thames Water, which has superseded the New River Company. Sections may be closed at need, but the paths can generally be accessed, to enjoy the beauty of many stretches of the New River.

The monument at Great Amwell

At Great Amwell, near the Amwell Springs, a monument was erected by Robert Mylne, Chief Engineer to the New River Company from 1769 to 1810, bearing the inscription:

Sacred to the memory of Sir Hugh Mydelton, Baronet, whose successful Care, assisted by the Patronage of his King, conveyed this stream to London. An immortal work, since Man cannot more nearly imitate the Deity, than in bestowing Health.