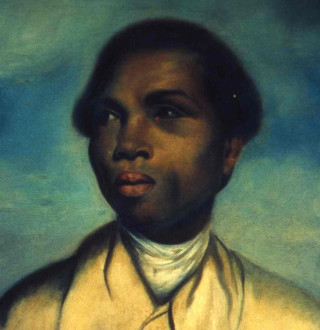 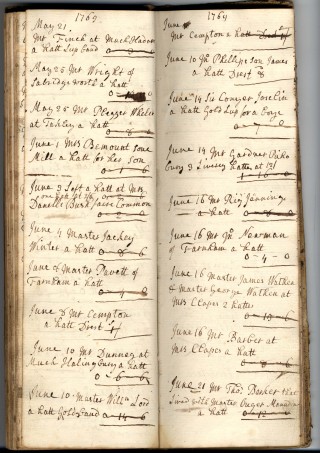 Francis Barber was born a slave in Jamaica, about 1735, and brought to England in 1750 by Captain Bathurst, a plantation owner, whose son Richard was one of Dr Samuel Johnson’s best friends.  On the death of Johnson’s wife in 1752, Barber was sent to be a comfort to him, and became his much loved valet.

When Captain Bathurst died two years later he gave the young man his freedom, leaving in his will: ‘to Francis Barber, a negro whom I brought from Jamaica … into England, his freedom and £12 in money’.

Although Francis Barber now had his freedom, in practice he had little choice but to stay in Samuel Johnson’s household, as an unpaid but favoured servant. It was not as idyllic a life as some have suggested, as Barber actually ran away twice, once to sea, before he was traced and brought back.

In 1767, Johnson decided to send Barber away to school in Bishop’s Stortford, paying £300 in school fees.  It is thought that Johnson had visited the town because of Quaker connections there.

The school was run by Mr Clapp, and when he died unexpectedly it was taken over by his wife, who saved it from near collapse.  The school was then at Windhill House, a 17th century building next to St Michael’s Church, which was converted into a monastery in the early 19th century, and now houses the tourist information centre.

Evidence for Barber’s stay in Bishop’s Stortford was found at Hertfordshire Archives in a Hatter’s Order Book, belonging to John Phillips. This shows that on 16 June 1769, Francis Barber had a new hat, costing 8s 6d, no doubt paid for by Dr Johnson.   The entry records: ‘Mr Barber at Mrs Clapes a hatt’.

On the same day, Master James Wathen and Master George Wathen also had new hats, costing 7s 9d each.   They were also ‘at Mrs Clapes’, so were fellow students of Francis Barber.

These entries point to the unusualness of the situation in which Barber found himself.  He was an adult, now about 34 years old, at school with boys less than half his age.  He must have felt very lonely and isolated, missing the buzz of the city and his friends there. In 18th century London there was a large black community, almost all of whom, like Francis, had been brought over from the Caribbean to work as unpaid servants in the houses of returning plantation owners, aristocrats, civil servants and seamen.  Visitors to Dr Johnson’s house rather disapproved of Barber entertaining his friends below stairs, which shows that he had his own social life there.

During the five years he spent at the school in Bishop’s Stortford, Francis was not even allowed to return to London for the holidays.  It is difficult to understand Johnson’s reasons, but his friend Samuel Boswell, writing in his Life of Dr Johnson, had no such doubts:

‘His sincere regard for Francis Barber, his faithful negro servant, made him so desirous of his further improvement, that he now placed him at a school at Bishop Stortford, in Hertfordshire. This humane attention does Johnson’s heart much honour.’

My compliments to Mrs Clapp

Johnson sent regular letters to Barber, on one occasion writing: ‘You can never be wise unless you love reading’. Boswell records: ‘Out of many letters which Mr Barber received from his master, he has preserved three, which he kindly gave me.’ One letter, dated 28 May 1768, reads:

‘Dear Francis, I have been very much out of order. I am glad to hear that you are well, and design to come soon to see you. I would have you stay at Mrs Clapp’s for the present, till I can determine what we shall do. Be a good boy. My compliments to Mrs Clapp and to Mr Fowler. I am, Yours affectionately, Sam. Johnson’.

Dr Johnson was known to oppose slavery, and once shocked the company in Oxford by proposing a toast to ‘the next insurrection of the negroes in the West Indies’.  It is said that he treated Francis like his adopted son, but telling a 33 year old man to ‘be a good boy’ suggests that however much he valued Francis, he treated him more as a favoured slave than a free man, and perhaps explains Barber’s attempts to break away.

Popular with the ladies

On leaving the school in 1772, Francis Barber was finally able to return to London, where he was now equipped to become Johnson’s secretary; arranging trips, receiving documents, and keeping Johnson’s diary.

He was popular with the ladies, and there is a hint that he might have enjoyed his time in Bishop’s Stortford, and made friends among local families.  He may even have helped out on farms during the long school holidays, as Dr Johnson said that he had ‘made hay’ with so much success that ‘one female haymaker followed him down to London to love’.

It seems her love was unrequited, unless she was Elizabeth Ball, an English woman said to be ‘eminently pretty’, who Francis married in London about 1773. They had four children, naming the eldest Samuel, after his benefactor. The whole family lived in Dr Johnson’s house, and when Johnson died in 1784, he left Francis an annuity of £70 (£5,000 today) along with his property and books.

Setting up his own school

As Johnson had wished, after his death Barber moved with his family to Lichfield, Johnson’s birthplace, where he became a schoolmaster.  It would be interesting to know how his own experience at Bishop’s StortfordSchool influenced his plans for his own school.