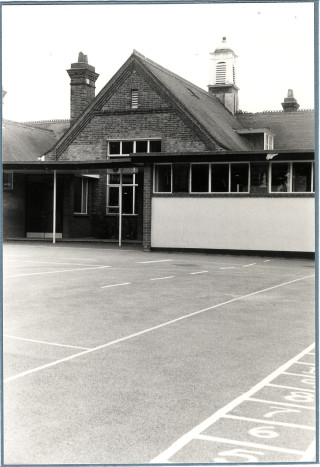 The following are memories of local people from the 1920’s to 1960’s, recorded by Ann Judge.

The school in Old Knebworth was erected in 1897 and enlarged in 1902 to accommodate 150 children.  With the development in ‘New’ Knebworth, the need for a new school was realised and a County Council school was erected in London Road in 1912.  The school accommodated all the elementary school children from the newer part of the village.  Both schools taught children up to the age of 14, when they left to start work, unless of course they were able to attend grammar school in Hitchin, or later on in Stevenage.

Memories of going to Old Knebworth School come from Alf W and Maud K.Alf says I went there when I was 5 years old, and I left when I was 14.  And I left, ‘cos in them days no work, no money. Well, them days there was discipline.  My teacher there, Mrs Ayres, she lived next door to the school in a house next door, and she was very strict.  She had a cane and if you done anything wrong, you’d feel it across your hand aswell.  I’ve seen some of the boys there, the back of their legs has been absolutely red where they’ve been, you know, been whacked with her cane.  But she overpowered ’em, and she used to, if you was very bad she used to lock you in the school after the others had gone out, and she’d come and let you out, probably about two hours afterwards.  I mean that’s where the discipline was them days. The rooms in the winter months was very cold.  And we only had two coal fires in one big room.  They used to be lit probably about half an hour before you went to school.  By the time the place got warm, it was lunchtime.  And you got no lunch at school, you had to walk home to lunch.  And I mean there was a family who lived at Rustling End, which was a mile and a half from school.  They had to bring their lunch with them, and they was allowed to eat it in school.  And they had to come through Graffidge Wood,  all the way through the Park to the school.  Hail, rain, or snow, I mean some of them, it was a big family that lived in Rustling End, and I know some of the poor boys that had hardly any shoes to wear.  They used to have cardboard inside of their shoes, because money was very scarce them days.  It was very hard work and, you see, no work, no money.  Those days.

Maud says  Mrs Harris was schoolmistress there then.  And she lived in the house across the road.  Now it’s a big house, there used to be two houses there. I can only vaguely remember her.  And we also had a Miss Day, that taught the infants.  You had the two rooms, a long room, where standard one up to standard 6 was, and then there was the infants till you went up.  They were very strictly really.  You had to take notice.  And you had to make sure you did things right.  No talking or anything like that, or you got a rap across the knuckles with a ruler.  Oh yes, she didn’t believe in holding back with the cane, did she, Miss Ayres our second teacher. Neither girls nor boys, if she thought you needed the cane, you had it.  And you all had to stand out in a row like this.  And I had it several times, I don’t mind admitting. But it didn’t do me any harm, ‘cos we knew then, where right from wrong.  But when I was nearly six, we moved to Burleigh Farm.  Because, our farmhouse we lived in was sold to Mr Gold.  He came from London, and he sold shoes and boots.  Button up boots.  I’ve got a buttonhook today what I used to use when I was a child, still in my purse. And Amy and I used to have to walk from Burleigh Farm, which is on the Hitchin Road. And we had to walk from there, either across through the wood, down by the lake and come up by Knebworth House, or go through the war memorial and come out at the bottom of the hill before you got up there.  And it didn’t make no difference ‘cos there wasn’t the traffic on the road those days.  ‘Cos I can only ever, never ever remember seeing a car them days.

Joy Abbiss who was at the London Road school during the war says yes, there was Mrs Harris, who lived in Gun Road Gardens I think, and another one, oh I think her name was Daisy Headly, she was quite strict.  Oh, then the little ones, when we were about 5, a plump lovely lady, I remember sitting on her knee.  So she was a bit softer I guess.  And then, yes I was happy there.

Bob O – I suppose my favourite teacher was Hetty Fletcher.  She taught history.  She was the Deputy Head aswell.  She’d been at the school ever since it opened.  And she was a wonderful history teacher, I mean she gave me the interest in history that I’ve always had.  We had another one,  Miss Smith, and they lived in Gun Lane, and her parents had been missionaries to the Eskimos in Labrador.  And she was such a gentle person, I always remember nobody ever came last.  If there were eight people in a race, and you were last, you weren’t last, you were eighth.  And she, once a year, for her class, she had all this stuff that they brought back from Labrador, all the Eskimo clothes and, she had a kyak and a paddle, and we were allowed to sort of dress in these clothes, and they were beautiful.

As well as these two schools, there were also private schools, in private houses.  Nen B went to one of these, and refers to it as Miss Downing’s – well, it was a very small school, just a little house in Gun Lane. It wasn’t called a ‘Dame School’, but that’s what it was.  There were never more than 6 or 8 children there, some of them came from outside Knebworth. There were other private schools in Knebworth.  I don’t know why we went there.

It was normal for children to leave school at 14, as to go to grammar school cost money if you didn’t have a scholarship. Maud K makes this point I didn’t have no option.  I mean your parents wanted you to work, to help.   I mean farm wages was terrible.

Vic H, who went to Hitchin Boys Grammar School, says ‘cos it couldn’t have been easy for father, because all four of us went to the Grammar Schools at Hitchin, and none of us were bright enough to win a scholarship, so he paid the school fees for all four of us, and for quite a considerable time there must have been at least two at Grammar School together. So, I don’t think it could have been very easy for them.

By the early 1950s when Joy Abbiss was at school, the 11+ had been introduced, and the school leaving age raised – well, you were expected to do well at school.  No mucking about.  You went to school and that was that.  And then at 11, it was the 11+  in those days, and only two, I think out of a class of about thirty, got places at the grammar school.  And I was lucky enough to get there.