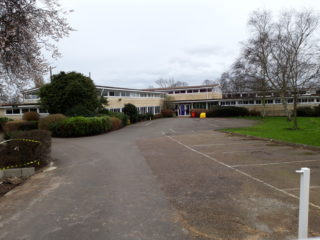 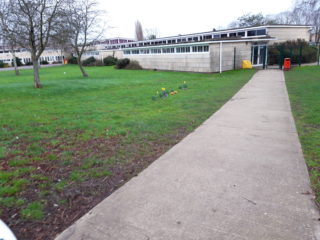 In general, listing tends to be associated with buildings centuries old with rich historic associations. Occasionally, however, there are good reasons for a relatively modern building to be listed, and one example is Burleigh Primary School in Blindman’s Lane, Cheshunt.

When I attended Burleigh, from 1959 to 1965, it seemed nothing more than an anonymous modern building, certainly less impressive than the imposing main building of Cheshunt Grammar School, which I went on to afterwards. I had no way of knowing, as a young child, that my school had been the first new school in British after the Second World War and set the pattern for the post-war boom in school building.

The Background to Burleigh School

Just before the War, Hertfordshire had planned to build a number of new schools to cater for the growing population, but these were shelved during the war. In peacetime, the problem grew even worse, given the government’s determination to move people out of London into the Home Counties, a move which saw several New Towns created in Hertfordshire.

More schools were needed very quickly, but there was a shortage of both bricks and bricklayers, so alternative methods were sought. The newly formed County Architect’s Department settled on a system called Hills 8’3”, a prefabricated kit using a frame of steel with concrete cladding, and their first project was Burleigh School.

The school was specifically aimed at replacing the old British School in College Road, which was no longer fit for purpose, and it opened in the summer of 1948 and named after Lord Burleigh*, Elizabeth I’s chief minister, whose home at Theobalds was only about a mile away.

The Building and the Philosophy

The official description of the school given in the listing is typically dry:

School. 1946. Hertfordshire County Council. Horizontal precast concrete panels; mono-pitched roof to deep eaves. Central hall with kitchens towards road, classroom block to south and 3 infants classrooms in staggered arrangement linked by corridors to the north, the latter comprising the earliest part of the school. Infants classrooms glazed away from road; each of 3 bays; wall to wall vertical windows to each bay; wall to wall glazing, divided horizontally by transom. Entrance to each of former infants classrooms to south side, beneath concrete canopies.
Attached ball of 1 tall storey, with very shallow pitched roof; 8 bays, 6 glazed to lower part of wall; continuous clerestory band beneath deep eaves. Block of 5 classrooms attached to south, in pairs except for end one, each’ almost fully glazed away from road; 4-lights each. Service areas towards road.

Historians of school architecture, however, are more expansive. According to Andrew Saint, the philosophy behind the design of Burleigh School was based on the idea

that children’s activities were as valuable as teachers’ examples as a means to learning, and that a child’s immediate environment provided a vital stimulus…

This, Saint argues, enabled the gradual move away from regimented desks. My recollection from 1959-65 is that this move was more noticeable in the infants part of the school, whereas when I moved on to the juniors, desks were still the norm, although more creative classes were being introduced. I still remember one maths lesson when we were taken out into the playground, given chalk and lengths of string and told to work out how to draw an accurate circle. One team got the solution — I’d like to say I was in that team, but unfortunately not.

The arrangement of the school overall was very logical. Although I spent one year in a classroom in a nissan hut, in general we started at the eastern end of the building for the reception class, and then moved along till we were in the classrooms at the western end by eleven. The assembly hall and dining hall were in between the infants and junior sections, which gave the whole building a roughly cruciform outline.

Burleigh School is still thriving and, from what I can see, the original building has changed little, at least from the outside, although at least one extra building has been added. But the system pioneered there was used throughout the county in the following years, and then all over the country, making Burleigh the original model for post-war schools. As Dennis Sharp puts it,

It set an important precedent, and variations on a similar theme have constantly appeared.

* The name is often spelt Burghley, and occasionally even Burley (standard spelling not having evolved by then), but in Cheshunt it’s always Burleigh.

The follow books and pamphlets have been consulted and are available at HALS:

Saint, Andrew, Not Buildings but a Method of Building, 1990, Hertfordshire Publications