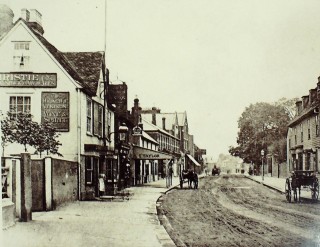 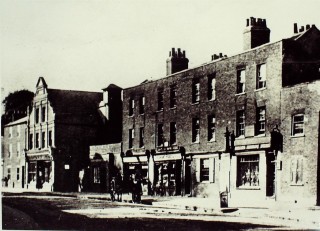 Shops on the west side, including the Post Office
Hertfordshire Archives & Local Studies 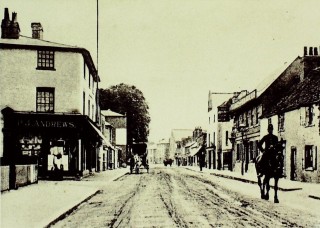 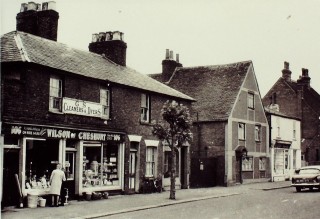 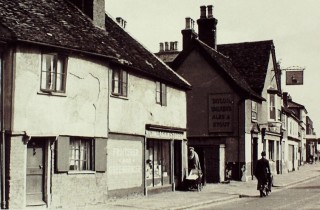 The Come Again Stores next to the Ship, east side, 1948
Hertfordshire Archives & Local Studies

As with most high streets, Cheshunt High Street was first and foremost for shopping. A considerable number of businesses can be found there in both the 1851 and 1912 Kelly’s Directories, and this remained the case at least up to the 1970s. Since then, it’s been the common story of town centre decline from competition by out-of-town business parks. Most of the shops are still occupied, but only a small proportion by traditional high street businesses.

The 1851 Directory lists 33 businesses that can be described as shops, including two smiths. The census has 43 heads of household who appear to run shops, though it’s sometimes difficult to distinguish between retail and wholesale, as well as being sure how many of these actually traded from the High Street.

Grocers are the most common (five of them) followed by four shoemakers. Other businesses included confectioner, baker, ironmonger, draper (the wonderfully named Oliver Death), butcher, tailor, “chemist and druggist”, tallow chandler and fishmonger. There were also two hairdressers, and three individuals described simply as “shopkeeper”. All useful, everyday shops — and, of course, not a take-away in sight.

The picture is similar in 1911, with 42 people who were probably shopkeepers of some kind. For the most part, the businesses were similar ones to 1851, with a couple of notable exceptions. There was, for instance, Frederick Catchpole, a cycle repairer, as well as Winton James Cornish’s Dining Rooms — presumably a restaurant of some stamp.

There seems very little sign of family continuity in the shops between 1851 and 1911, though in some cases businesses may have been seamlessly taken over by assistants and renamed. It’s difficult to be sure how many businesses remained on the same property, because there were no street numbers in 1851.

On the other hand, the 1911 census includes several businesses that I recognise from the 1960s and later, at least two of them in the hands of the same family. Charles Blaxland had a grocer’s shop at number 7, and Blaxland’s Grocery was still trading during my childhood. Also Pointings, the newsagent that delivered our papers, was still at number 21, where Frank Pointing was listed as a newsagent in 1911. I believe I also remember Taylor the Butcher, with its familiar awning outside, at number 35, owned in 1911 by Tuckney Taylor. This is almost certainly the same butcher’s business owned in 1851 by Joseph Taylor.

Frederick James was listed at number 49 as a “pharmaceutical chemist shop-keeper”, and this is the same address as the chemist shop called Catteralls in the 1960s and Punni today. In 1905, the pharmacist had been H. Graham, and it may well have been the same business owned by George Lintern, chemist and druggist, in 1851. There was also in the 1960s a tobacconist/confectioner called Fell’s that had a barber’s shop in the back, at the same address as Edward Jarvis’s hairdressing shop in 1911 and could have been one of the two hairdressing businesses listed in 1851 (William Pawley or George Threader).

Perhaps the most interesting example of continuity is the bakery at number 78. In my childhood, it was called Moorfields (after joint owners Moorhouse and Bexfield) and baked exquisite bread — there were always long queues in the morning. In 1911, the bakery was owned by Ernest James Dyer, and was most likely the bakery owned by Henry Butler in 1851.

The same building had been a bakery owned by Samuel Brookland, who died in 1797. A philanthropist, Brookland donated bread to the Cheshunt Workhouse during his lifetime and provided for the workhouse in his will. The building was demolished in the 1960s as part of a road-widening scheme for the junction of the High Street with Cadmore Lane, to be replaced by one with the same street number but standing further back, which is still a bakers shop.

There were some other businesses I recall from the 1960s that must have been set up later than 1911. Bishop and Cain was an excellent hardware shop on the east side, which only closed a few years ago — the kind of shop where you could describe vaguely what you wanted and they’d know what you meant and where to find it.

There was Bancroft the drapers, Cooks the post office/newsagent, and a confectionery shop simply called The Sweet Shop. The Cooks’ son opened a gents’ outfitter a few doors away called Geoff’s, which only closed down recently. Sharps the fishmonger was located in one of the street’s oldest buildings, number 66, but it had moved from opposite Brookfield Lane, probably where T. Norris had a fishmonger’s shop in 1911, and possibly the same as George Squires’ business in 1851.

Further north, in the part of the High Street most devastated by the planners, I dimly recall the Come-Again Stores and Hancock’s cycle shop on the west side, and a shoe-repairer opposite Brookfield Lane, along with Sharps. I have clearer memories of Whitmans, a newsagent/tobacconist/confectioner on the east side, which stood back from the rest of the buildings. Apparently, it had been built like that in line with a later-abandoned plan to widen the road, and suffered years of being overlooked before it was bulldozed with the rest.

For as long as I remember, certainly, the High Street was secondary to the Old Pond as Cheshunt’s shopping area, but it was significant nonetheless. There are a few “proper” shops left there, but they’re constantly dwindling, being replaced by services or takeaways. But that’s the story of most high streets.