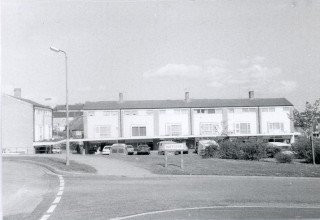 This picture was taken in 1990 using a black and white film.

These were my local shops in the 1970s although I think they were built earlier with the new housing estate, locally known as the Tottenham Estate (Oakmere Estate) because people from Tottenham were housed here around the 50s. (There is also an Edmonton/Ashwood Estate in Potters Bar).

From left to right, the shops were:

A butchers, a launderette, a hardware store, unknown store, newsagents, off licence, supermarket (Londis in the picture) and a greengrocers.

My memories of going to these shops are of tying our dog to the lampost outside and the butcher giving us bones for the dog, buying penny sweets and our weekly comics from the newsagents, mum getting her Family Allowance and taking used bottles back to the off licence in exchange for a few pennies.

In those days, children used to go into the shops with notes from their parents or nan to buy cigarettes. I remember the shopkeepers saying that they could not accept these notes.

Once, my mum was in the greengrocers when another woman came storming in holding a cabbage half-eaten by slugs! I remember slugs often coming up to the top of a pan of boiled cabbage!

We also bought spuds (potatoes) by the sack load and they came covered in dirt from the field.

The shops were knocked down and replaced by housing around the mid-late 1990s.