You are here: Home>Herts history>Places>Shops>Working on the Mobile Grocery shop in the 1950's

Working on the Mobile Grocery shop in the 1950's 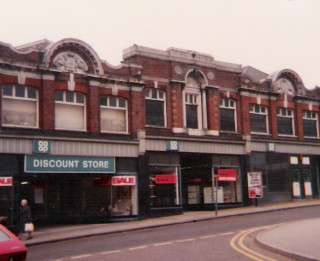 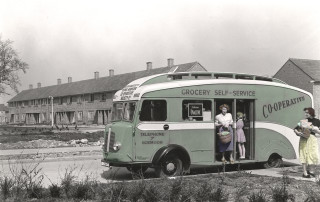 Working on the Mobile Grocery Shop in the 1950’s

In St Albans, Hertfordshire where I lived, the Co-operative store in the town had 3 mobile shops attached to the main grocery store in town. The manager of the store was Mr Rose.
These Co-op mobile vans provided a ‘self-service’ grocery shop to customers in the many outlying villages and new estates around the area at that time, usually, and on a most welcome, twice a week basis, they were the era just prior to the many later supermarket shops.

In 1958 I was employed at the Co-op main store and worked on one of their mobile shops as the Mobile Grocery Manager’s assistant. The manager was Mr Vic Richardson. My wage was just over £6 a week, which because I worked on the mobile shop, was slightly more than if I worked in the main store. I was also provided each week with a white linen overall to wear.
In winter I needed a warmer jumper underneath as there was no heating on the van. On cold days my manager set up a small portable paraffin stove, which was put discreetly behind the counter – but when the manager began serving there wasn’t much room! Also, when he was in the cab driving I was given an old biscuit tin with a cushion to sit on as we drove around! (No Health & Safety then!)

The hours were 8.30am to 5.30pm and on Saturdays we finished at 1pm. Due to the travelling the times often varied especially on busy days. Lunch breaks were as you worked or at a quiet time and certainly not regular. There were three staff to each mobile shop – the Driver/Manager, his assistant and the stock room assistant. Each van/shop had its own space at the depot and a separate stock room where the shop would be loaded with fresh produce each morning before setting off on the ’round’.(The depot was in the old Horace Slade box factory – they used to make boxes for Woolworth’s.) Monday mornings saw the other two vans leave us before for their rounds, as we spent time on paper work then re-stocked before we too left for our afternoon session.
At each stop we announced our arrival by using the horn several times, keeping a look-out for the customers as they made their way to the van.
The rest of the week, after the morning stock check, we set off each day at about 9.30 am where we would be out all day travelling to the many regular customer stops – only returning to the depot at the ends of each day’s round. (Being out all day often meant stopping at the local pub or a customer might allow us a toilet stop!)
Sometimes we would stop at the Co-op garage for fuel – the van was very large and I recall the word GUY on its bonnet front!

Stocked from floor to roof

The ‘van’ was stocked on each side from floor to the roof and had a central rail with an In & Out door entrance. When we were busy the van was often quite full as the customers stood waiting to be served – there was much chatting and banter too which certainly made the day a most pleasant experience and not in the least boring!
I found the job very interesting as I learnt to weigh and measure the cold meats, bacon, cheese etc. which were kept in a cold store at the counter end by the scales. I also learnt to write up each customers small payment receipt with the share number – so they would receive their share ‘Divi’ each year!. For me, as the weeks passed, I got to remember each customer by their number!
Everything had a special place – dry goods together, tins had an extra rail in front to prevent them falling out. Vegetables and potatoes were near the floor. We sold firelighters, small bundles of wood (in those days many people had coal fires) but we didn’t have too many damaged items, considering all the travelling involved and I can still remember the ‘smell’ wafting from the goods inside the van as we opened up each morning – something which  a grocers shop seemed to exude more then than today!

While I worked there it was the Christmas period and we decorated the van inside as we carried the exciting Christmas fare, puddings, cakes and crackers. People often ordered items which we delivered then and as Christmas approached many housebound customers offered us a mince pie and a tipple! We had a staff box on the counter and it was shared out on Christmas Eve. With only two days off it was back to work soon afterwards.

After I married in March 1959 I left to find other work – but now, as with many other things, those Mobile grocery shops have passed into history. However, I can still recall the days when I was a grocery manager’s assistant on the Co-op Mobile Grocery Shop……