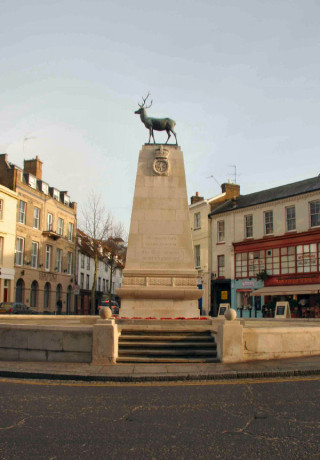 Hertfordshire Archives and Local Studies (HALS) collects and preserves original documents covering many aspects of life in the county, including the environment, businesses, institutions and societies. There are over 3,000,000 documents dating from 1060 to the present.

What is the project about?

In December 2021, the Armed Forces Covenant in Hertfordshire will have its 10th anniversary. To mark the anniversary, HALS will collaborate with local volunteers to co-create an exhibition exploring and reflecting on remembrance in recognition of those who have served the county and country.

There will be a particular focus on the memorials of the First World War as this conflict led to a watershed in memorial making. Before this, war memorials had essentially reflected victory, but by 1918 over 1,100,000 men from Great Britain and its empire had died. Almost every community or family had lost someone, but due to a policy of non-repatriation, the vast majority were not able to attend a funeral and process their grief in the usual manner. The scale of loss demanded fitting responses at both the national and local levels.

Records at HALS show how agreements were reached on how each community would commemorate the war, how these would be funded and where they would be located. In terms of style, memorials ranged from cenotaph type structures to figurative sculptures, as well as practical memorials such as hospitals or village halls. In Hertfordshire there is also one ‘Thankful Village’, where all who served returned and the memorial here is interesting to explore too. Ideally the exhibition also will include some contrast with memorials from more recent conflicts which reflect society’s evolving relationship with war and loss.

There will be two public events exploring remembrance and memorial making and looking at specific examples within Hertfordshire and one internal event to coincide with Hertfordshire’s Armed Forces Covenant Reaffirmation ceremony at County Hall on 16 December, 2021.

We’re thrilled to have completed the research on this project and have put together five panels exploring different aspects of memorial making in Hertfordshire in the aftermath of World War I.

These will be on display in the foyer from 17 January – 30 June , along with several original documents.

In the meantime, our huge thanks to the volunteers who have worked with us on the project since September.

We are now starting  to plan events to accompany the exhibition.  More updates to follow.