The Hertfordshire County Council Art Collection has a diverse range of 261 art works, including three sculptures of Queen Eleanor on loan to the Victoria and Albert Museum in London, and other sculptures, oil paintings and murals in council offices, libraries, schools and academies across the county.

Many of the works reflect the history of the council and artists who have lived or worked in Hertfordshire. These include John Akers, Anna Bissett, Rory J Browne, Barbara Hepworth, Paul Hiles, Mary Hoad, Henry Moore and Barbara Lander.

Art UK to see other art collections in venues across Hertfordshire and the rest of the United Kingdom.

The Royal Society of Sculptors which contributes to the preservation, protection and promotion of public sculpture.

3D wood and metal wall hanging in Welwyn Garden City Library. Collingwood was the pre-eminent British artist weaver of the 20th century and one of the founding members of the Digswell Arts Trust in 1958. The Hertfordshire Art Collection has four other Collingwood hangings which will be undergoing conservation. 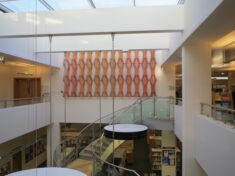 One of 3 sculptures from Waltham Cross. These have been on loan to the Victoria and Albert Museum, London since 1985. This sculpture is in the Medieval and Renaissance Gallery. 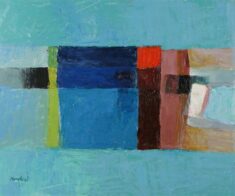 Nina Mary Baigent Hoad (1908 to 1968) was a painter and art educationalist, born in Beckenham, Kent, the daughter of a stockbroker’s clerk.

Mary studied at the Chelsea School of Art and in 1948 became County Art Organiser for Hertfordshire Education Authority.

She served with Nan Youngman, painter and educationalist and Herbert Read, art historian and philosopher on the editorial board for Athene, the journal of the Society for Education in Art which organised Pictures for Schools exhibitions, the first of which was held at the Victoria and Albert Museum in 1947.

Mary went on to become Principal of St Alban’s School of Art (now the Hertfordshire College of Art and Design) from 1957- 67 where she promoted courses in art therapy.

More of Mary Hoad’s works can be seen on the Art UK website. 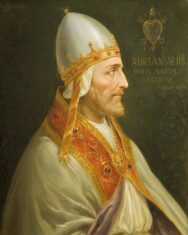 Pope Adrian was born in Abbots Langley, Hertfordshire hence the reason for place names, such as “Popes Road” “Adrian Road” and “Breakspear Place” in the village, to name but a few. Pope Adrian IV was head of the Catholic Church from 1154 until his death in 1159. He was the only, thus far, English born pope.

This work is on display in St. Saviour’s Church, Abbots Langley.