A passion for textiles 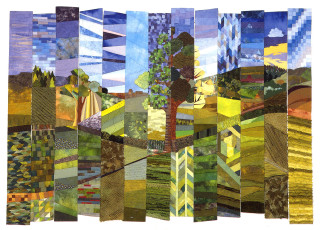 New Horizons Textile Group started  sixteen years ago when former students of the City and Guilds Patchwork and Quilting course at North Herts College in Hitchin decided they were keen to stay in contact after they had complete their course.  For a while the group continued to meet in Hitchin but about twelve years ago moved to Bramfield, just outside Hertford.

In the first few years members came mainly from the course at North Herts College but latterly people have been invited to join from courses all over Hertfordshire, Bedfordshire and London.  Membership is by invitation and everyone has studied City & Guilds courses, the majority in either Patchwork and Quilting or Embroidery.  Some have taken their studies on to a more advanced level but all of the group share a passion for textiles!

The group meet fortnightly and offer each other advice, support and encouragement with both individual work and group projects.   An early decision was that they would seek to exhibit their work regularly both locally, nationally and internationally.  To date exhibitions have taken place in museums, both locally and nationally, National Trust properties and other galleries.  Currently the group have a small exhibition, ‘Inspiration from a Nation’, at Wardown Park Museum in Luton to support the ‘Fabric of a Nation’ exhibition.   Working together on projects, early on a decision was made to work on a group project.  Looking out of the windows at the village hall where they hold their meetings was the inspiration for the first of these projects a wall hanging aptly named ‘The View from Here’.  Further group quilts have followed.