An exhibition at Tate Britain celebrates Van Gogh’s time in Britain.[i]  He worked in Covent Garden and lived in Brixton and the Oval but he also visited Hertfordshire. 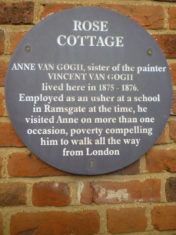 There are plaques recording her time there and her brother’s visit but they do not reflect the fact that the walk started in Ramsgate.  It was described in a letter Vincent Van Gogh wrote to his brother:

Last Monday I left Ramsgate for London. That’s a long walk indeed, and when I left it was awfully hot and it remained so until the evening, when I arrived at Canterbury. That same evening I walked a bit further until I came to a couple of large beeches and elms next to a small pond, where I rested for a while. In the morning at half past 3 the birds began to sing upon seeing the morning twilight, and I continued on my way. It was good to walk then. In the afternoon I arrived at Chatham, where, in the distance, past partly flooded, low-lying meadows, with elms here and there, one sees the Thames full of ships. It’s always grey weather there, I think. There I met a cart that brought me a couple of miles further, but then the driver went into an inn and I thought he might stay there a long time, so I walked on and arrived towards evening in the well-known suburbs of London …..

But to continue: I spent one night at Mr Reid’s and the next at Mr Gladwell’s, where they were very, very kind.  I wanted to leave for Welwyn that evening, but they literally held me back by force because of the pouring rain. However, when it had let up somewhat, around 4 in the morning, I set out for Welwyn. First a long walk from one end of the city to the other, something like 10 miles (each taking 20 minutes). In the afternoon at 5, I was with our sister and was very glad to see her. 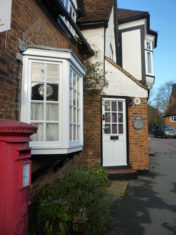 She looks well and you would be as pleased with her room as I am, with ‘Good Friday’, ‘Christ in the Garden of Olives’, ‘Mater Dolorosa’ &c. with ivy around them instead of frames….. A handshake in thought from