You are here: Home>Herts history>Topics>Black History Month 2020>Hertfordshire and the Slave Trade

Hertfordshire and the Slave Trade

The earliest records of English involvement in the slave trade date from the mid 15th century. The trade peaked in the 18th century and was not abolished in the British Empire until 1834.  During this time, between 10 and 12 million Africans were transported to the Americas.  Besides England, other seafaring nations with overseas colonies and trading interests such as Spain, Portugal, France, the Netherlands and Denmark were also involved in the slave trade.

In the 18th century, traders left English ports, carrying goods such as cotton cloth, glass, brass pans and guns. They sailed to the western coast of Africa, where these goods were traded for African people, who were then loaded onto the empty ships. The voyage across the Atlantic took about two months and once in the Americas, those who had survived were sold at auction and put to work on plantations. The ships then returned to England with goods such as sugar, rum coffee, tobacco, rice and raw cotton, which had been produced by slave labour.

As a landlocked county, it may be a surprise that Hertfordshire people were involved in the trade, but in the county archives, we have records showing how they were involved. You can view these by booking a visit to the archives. You may also be interested in exploring the UCL database, Legacies of the British Slave Ownership, which gives information about all British slave owners and the compensation they received when the trade was abolished.

We can look now at some examples of material relating to Hertfordshire. Here we see deed of sale for a coffee plantation in Grenada, owned by the Giles-Puller family of Youngsbury Manor, Standon. Listed under the ‘property’ are 37 men and women. 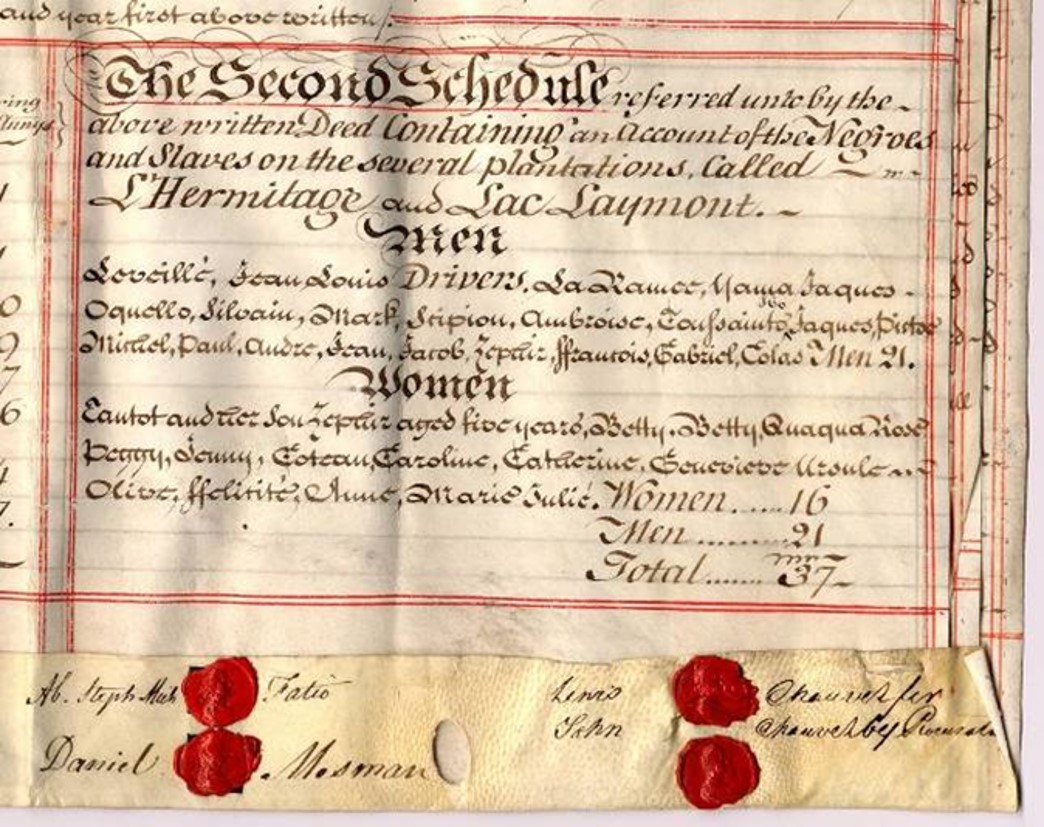 Deed of sale for coffee plantation

Also among the Giles Puller family papers is this valuation of their York Valley plantation from 1800.
This includes the value in money for the enslaved Africans working there. The list gives the name, age and occupation of each person. Ages range from 1 to 65. Many have had their African names replaced with English ones, such as Jack or Sam. Some of the young children are noted as suffering from tropical diseases. Beside the entry for Gros Occoro, aged 50, there is a note to say that he has attempted suicide. 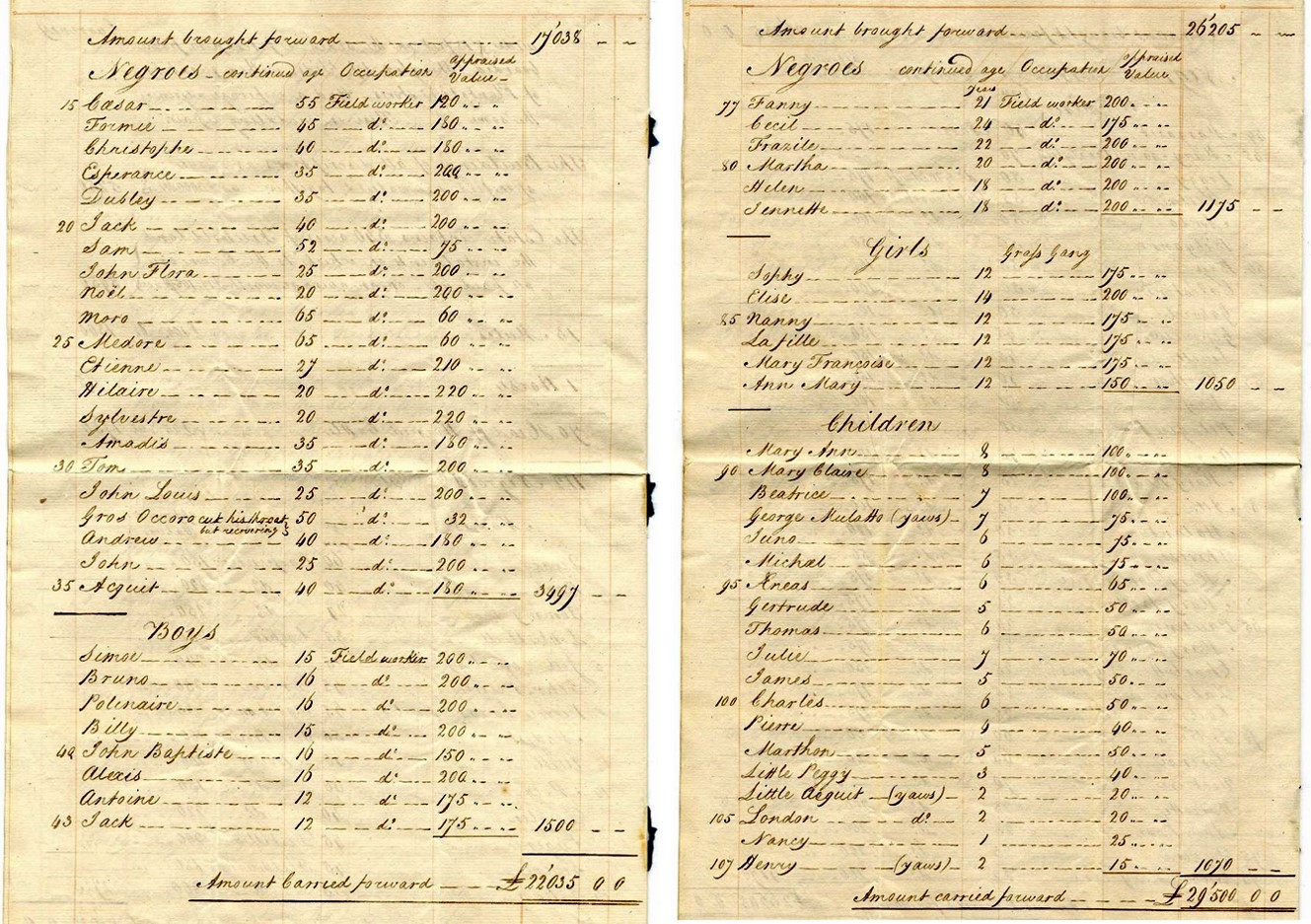 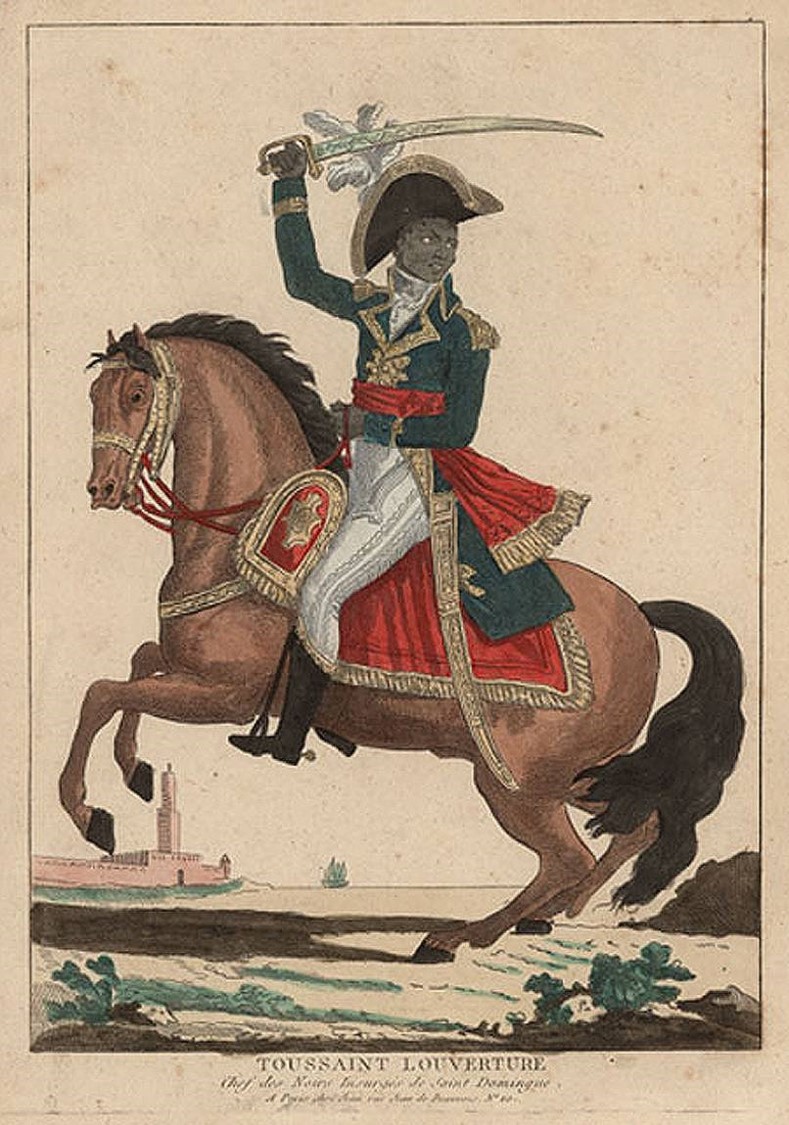 Africans reacted to their loss of freedom with individual acts of resistance but also with organised revolts. Although most were unsuccessful and those responsible were punished severely, these revolts contributed to the hastening of the abolition of slavery – a system which was entirely at odds with the notions of liberty and equality springing from the French Revolution of 1789 and the American War of Independence, 1775-1783.

Here we see Toussaint L’Ouverture, a slave in the French colony of Saint-Dominigue, who was liberated in his thirties. In August 1791 he led a successful uprising against the French and later against the Spanish and the English. By 1801, he was governing the island by himself.

Sadly, he was taken captive by the French in 1801 and died in prison in 1803. However, his legacy was a well trained army, who managed to retain the colony’s freedom. They changed the name of the colony back to its indigenous name, Haiti.  The Republic of Haiti, declared its independence on 01 January 1804.

Between 1793 and 1801, 89,000 British soldiers served in the West Indies.  Of these nearly half died of tropical illnesses or were discharged. More than 3,000 deserted. In our records we have the correspondence of one of the soldiers sent to squahs L’Ouverture’s rebels. This was Henry Johnstone who lived in Great Gaddesden.  On 15 June 1796 Henry embarked on the ship the Adventure for Saint Domingue to join the York Hussars.

Note from Henry Johnstone to his wife on leaving EnglandHe arrived there in September 1796 and on 2 October 1798 he wrote: ‘At last all St Domingo is evacuated, my Regiment is at Jamaica’. He adds: ‘on its arrival there, lost in 10 days 90 men & 2 officers’.