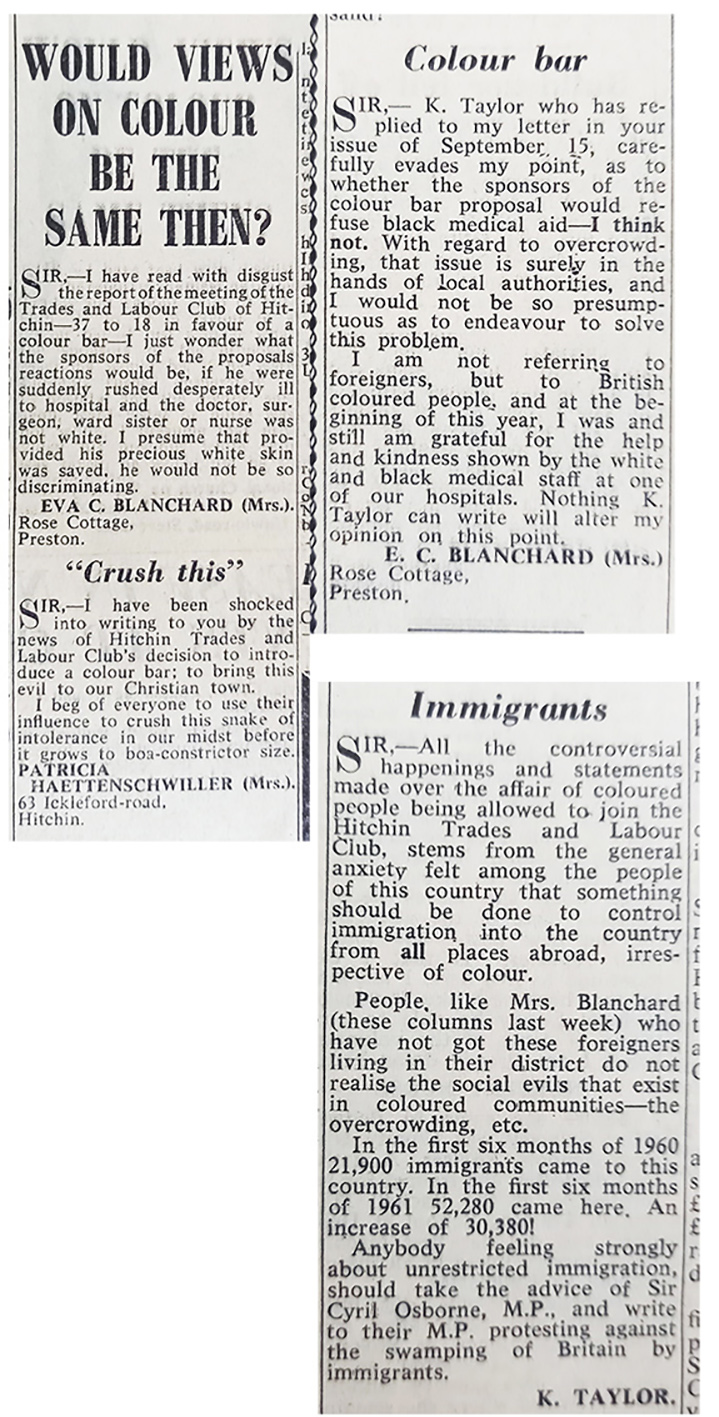 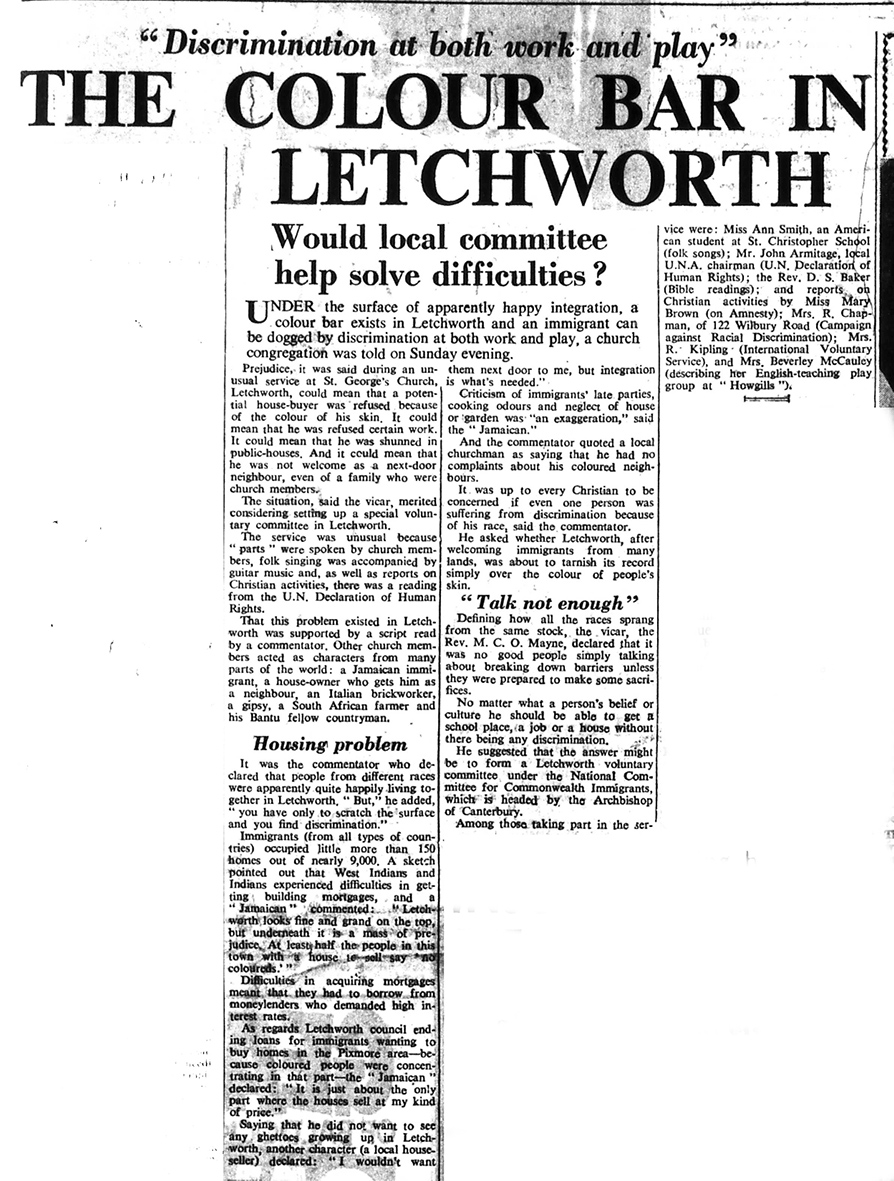 Article on an unofficial colour bar in Letchworth
Herts and Beds Citizen, 10 February 1967 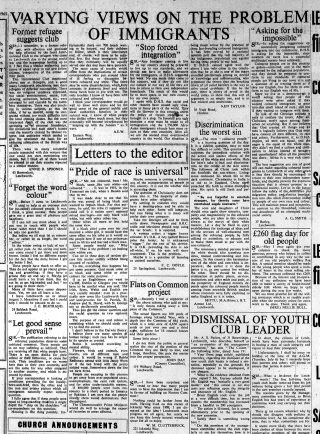 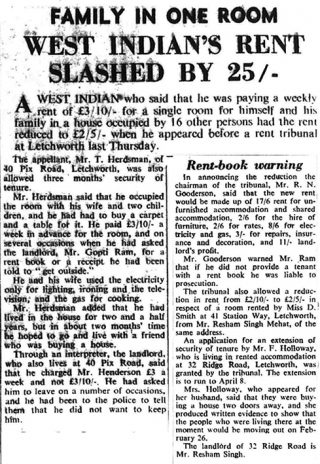 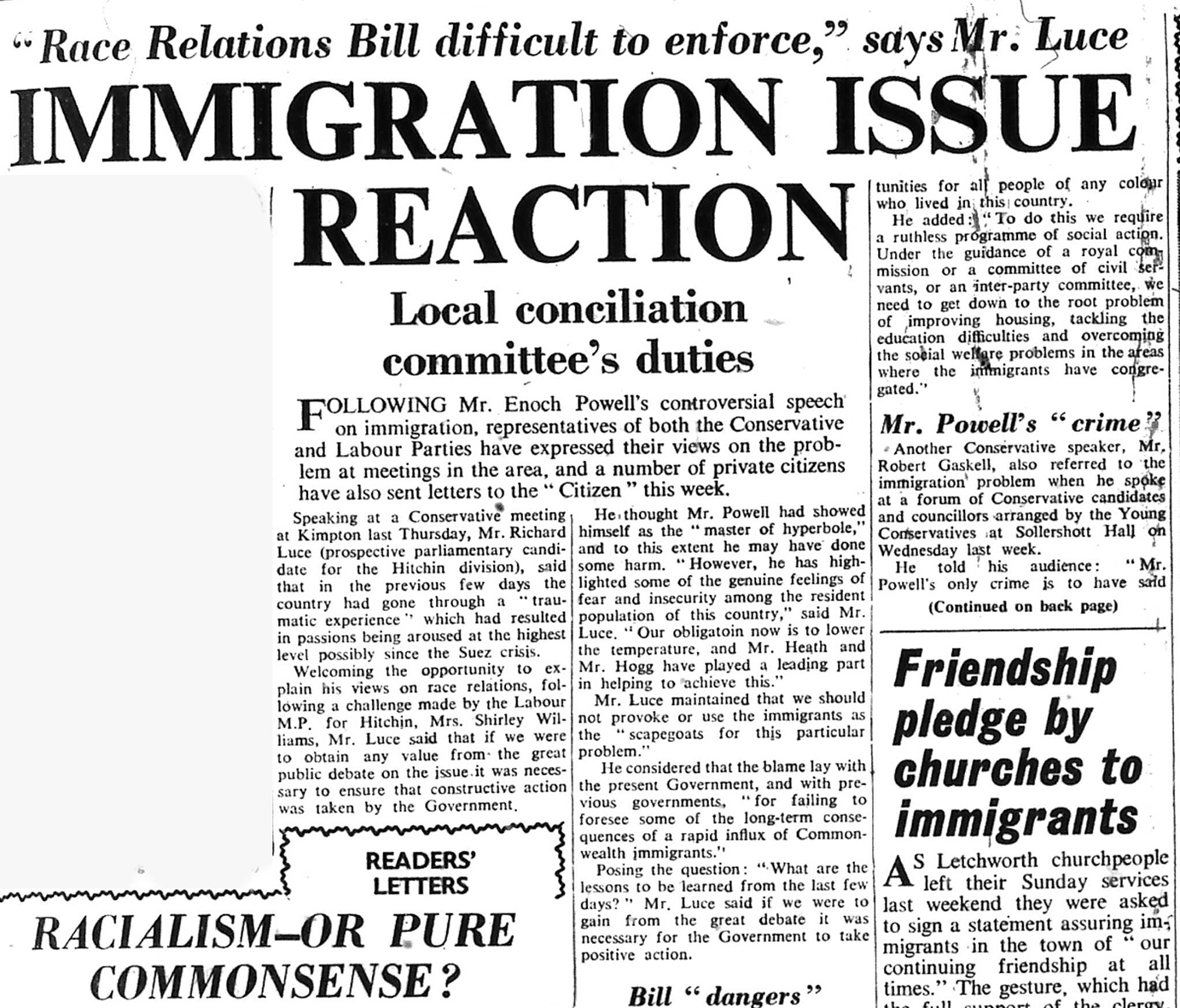 Letter to the editor on racism
Herts and Beds Citizen, 3 May 1968 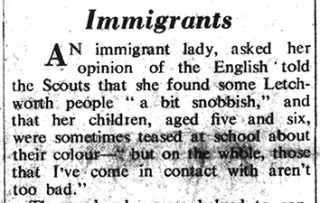 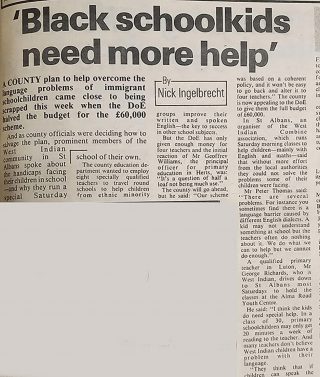 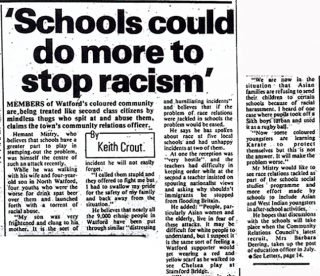 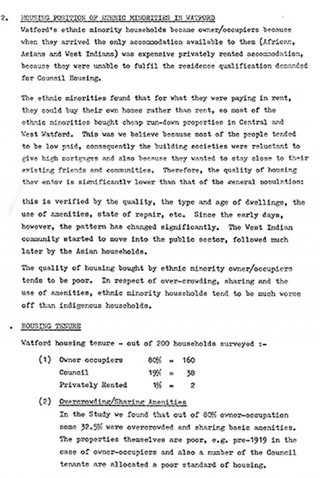 Report on the housing position of minorities in Watford, by Watford Borough Council, 1983
HALS (DE/Do/22) 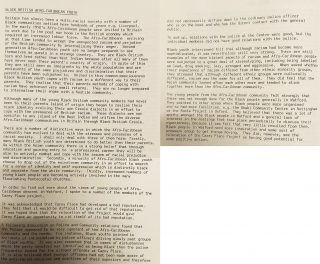 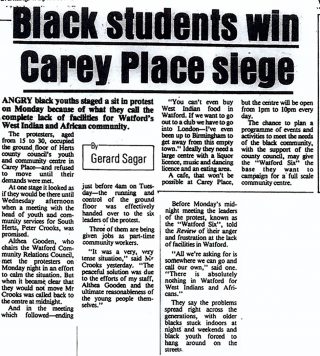 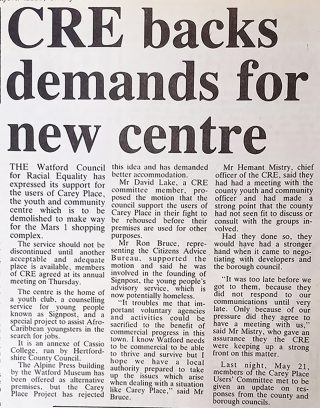 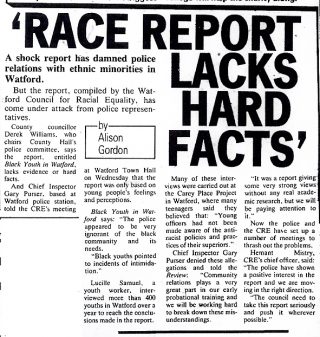 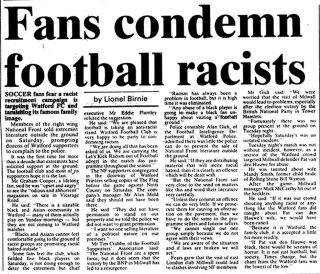 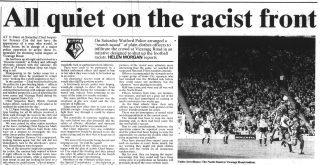 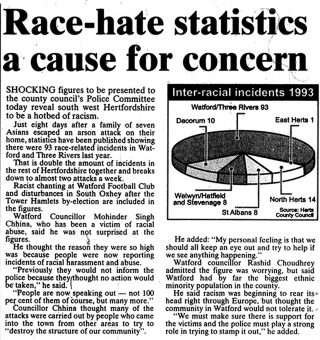 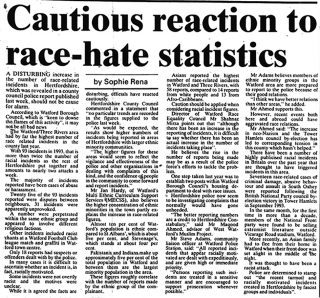 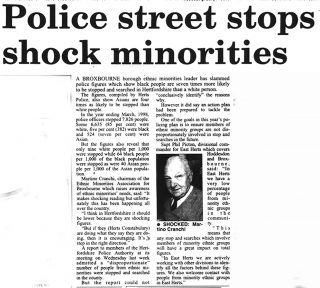 By the late 1950s, Britons were becoming more aware of racial tensions, both at home and in the US and South Africa.  Immigrants from the Commonwealth felt they had little protection from discrimination, which led to confrontations in areas where there were large African Caribbean communities.  In 1958, racial violence in Nottingham and London Britain pushed race relations to the forefront and the press beganning reporting incidences more widely. White prejudice was seen to be based on ignorance, insecurity as well as feelings of superiority through a long history as a colonial power.

Many of the first wave of immigrants who arrived in Hertfordshire to look for work and find a home in the 1950s and 60s found themselves subject to discrimination in various forms, from being refused accommodation and certain jobs, to being shunned from some pubs and even from particular churches because of the colour of their skin.  It was a shock which they had not been prepared for and some returned to the West Indies, but many remained.

The book ‘North Herts African Caribbean Roots’ by Eric Blakely and Gurdev Delay, (2007) records some of the experiences of the new settlers, good and bad.  One Barbadian who arrived in Letchworth in 1953 experienced a lot of hostility and moved around in small groups for safety. Another found England cold and unfriendly; he couldn’t get work as a carpenter, for which he was trained.  Many of these men had to take low paid jobs in factories.  At British Visqueen (a plastics company) in Stevenage, one man found himself to be the only black employee and before the company took him on, he had to be ‘approved by the Union’. https://www.ourstevenage.org.uk/content/category/work/british-visqueen

‘Crush this snake of intolerance’

In 1961, The Hitchin Trades and Labour Club voted to implement a ‘colour bar’ (denying non-white people equal access).  Newspapers reported that two West Indian workmen had applied for membership, and a car worker resigned in protest when the club indicated its willingness to accept them.  He was supported by some members’ wives who were honorary members and had no voting rights or say in the club’s affairs. The club was met with a boycott and so they quickly reversed the decision.  The Daily Herald reported that ‘since the War, Hitchin has acquired a coloured community of around 350’ and that ‘the people of the shire did not take readily to their arrival, but there was no deep colour predjudice – until last weekend’.

In 1965, national newspapers reported racial disturbances in the midlands.  The struggles of the Civil Rights Movement in the US were at a height and its impact would inevitably be felt in the UK.  That year, a police race relations report by Hertfordshire Constabulary mentions a ‘fiery cross’ being nailed to a door in Kings Road in Hitchin, which was dismissed as the work of ‘local youths and not an organisation’ (i.e the American hate group known as the Ku Klux Klan.)  The incident was not reported in the local newspaper.

The Race Relations Act 1965 was the first legislation in the United Kingdom to address racial discrimination. The Act outlawed discrimination on the “grounds of colour, race, or ethnic or national origins” in public places in Great Britain. It also prompted the creation of the Race Relations Board in 1966. At the time it was passed, there were nearly one million immigrants living in the UK.

‘I wouldn’t want them next door to me, but…’

In Letchworth in 1967, a local newpaper reported on an ‘unusual chuch service’ where they said that ‘people from different races are quite happliy living in Letchworth, but you only have to scratch beneath the surface and you find discrimination’.  A Jamaican commented ‘Letchworth looks fine and grand on the top but underneath it is a mass of prejudice.  At least half the people with a house to sell say ‘no coloureds’.  A local house seller said ‘I wouldn’t want them next door to me but integration is what’s needed’. Criticisms stemmed from allegations of noisy late-night parties, cooking odours and the neglect of front gardens.

A Stevenage resident recalls that in the 1960s, her dad concreted over the front garden and painted it green because her mum was getting abuse from the schoolkids in the playground opposite her house when she was tending her flowers.

The Act of 1965 was strengthened with the Race Relations Act 1968, which made it illegal for someone to be refused housing, a job or access to services (like a mortgage) because of their ethnic background.  It was replaced by the Race Relations Act 1976, which saw the creation of the Commission for Racial Equality, which was put in place to make sure the Act rules were followed.

In the 1970s and 80s, local newspaper reports showed that far right group, the National Front was active in the Watford area.  Into the 1990s, there were problems with racist football hooligans at the town’s Vicarage Road ground, who were causing trouble by chanting abuse at their own black players if they made a mistake .  At one match in November 1993, many supporters were sickened by what they heard and left the ground in protest.  The club and the police were critisised for not doing enough to prevent it.

In 1999, police figures reported in the Mercury showed black people in the Borough of Broxbourne were seven times more likely to be stopped and searched than white people.  The use of ‘stop and search’ powers are just as controversial today as they were 20 years ago.

The Equality Act 2010 requires all public services to publish information showing how they meet their responsibilities under the Act.

To fulfil this duty, Hertfordshire Constabulary produces an annual ‘Policing Hertfordshire for everyone’ booklet.  The newly published 2019-20 edition showcases some of the work undertaken during the 2019-20 policing year to support our diverse communities, tackle discrimination and offer equal opportunities for all.