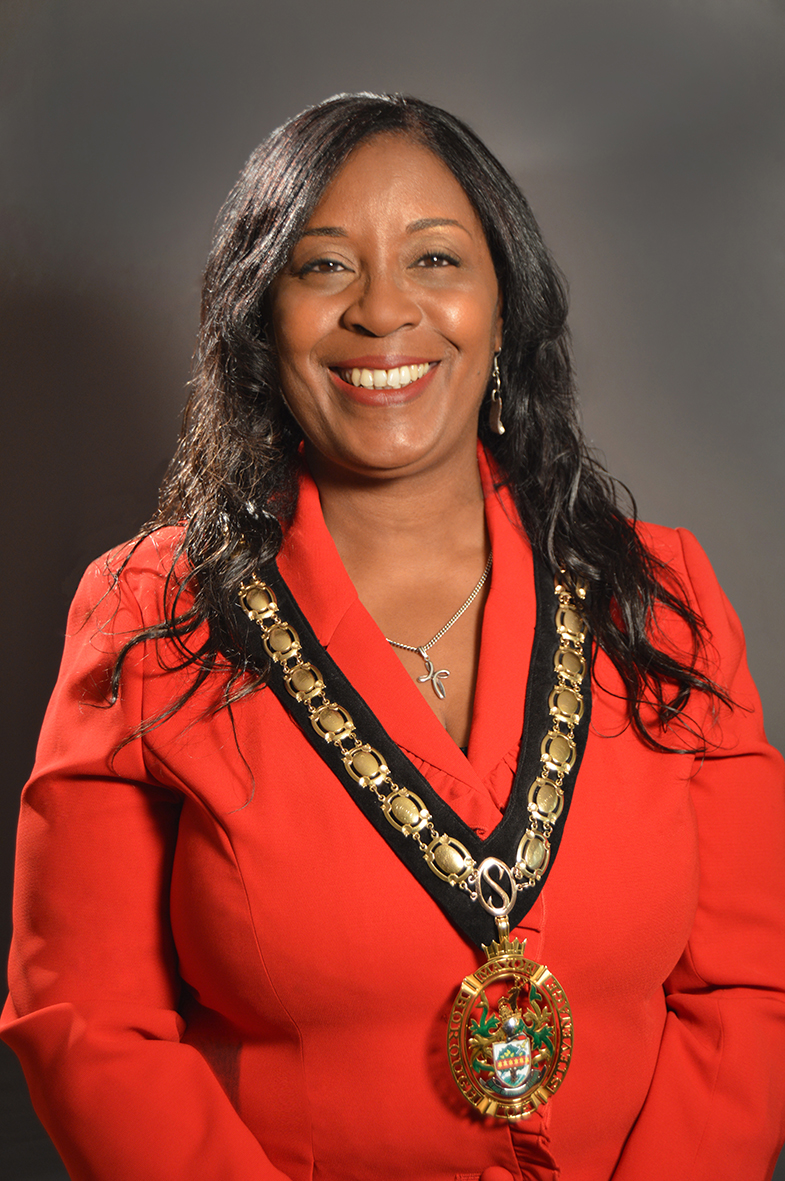 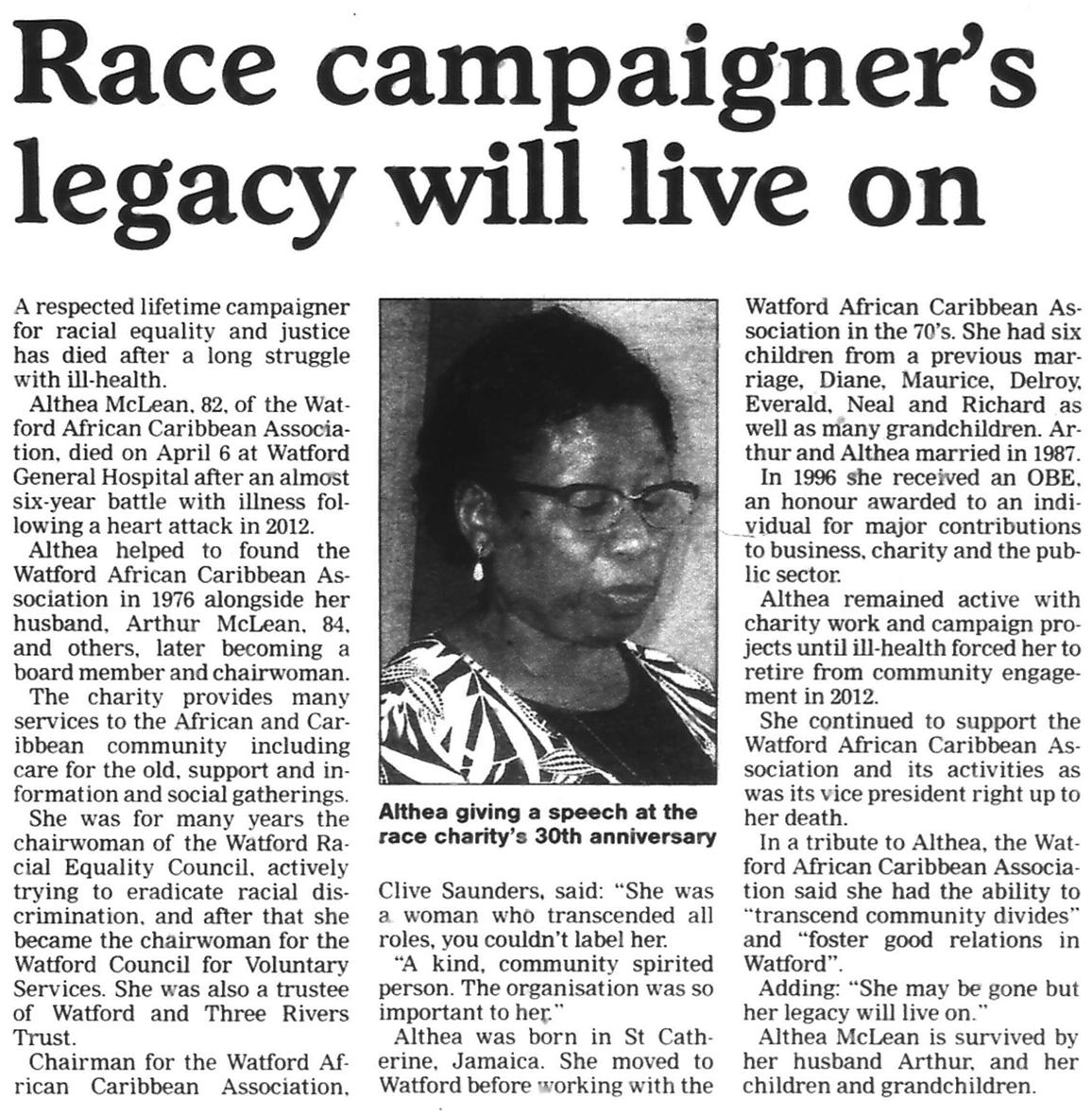 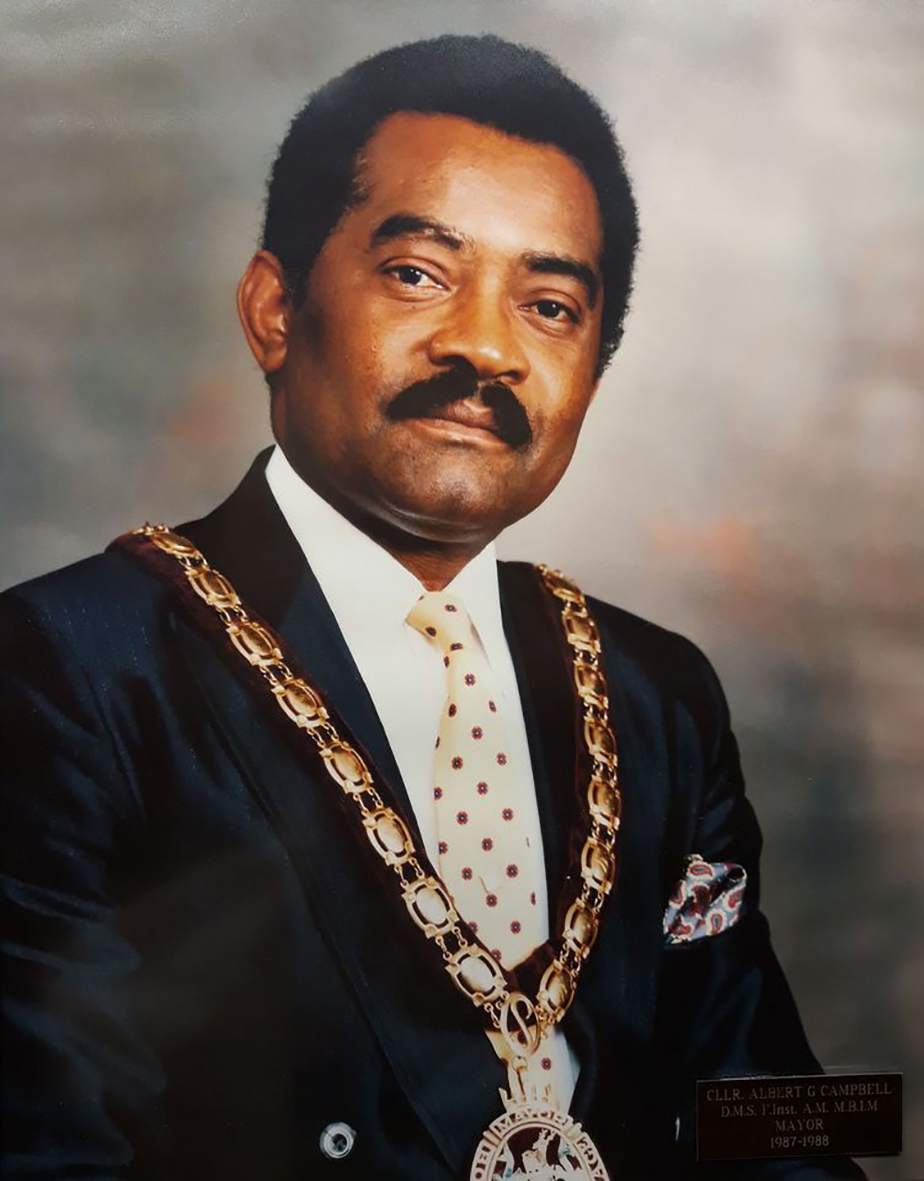 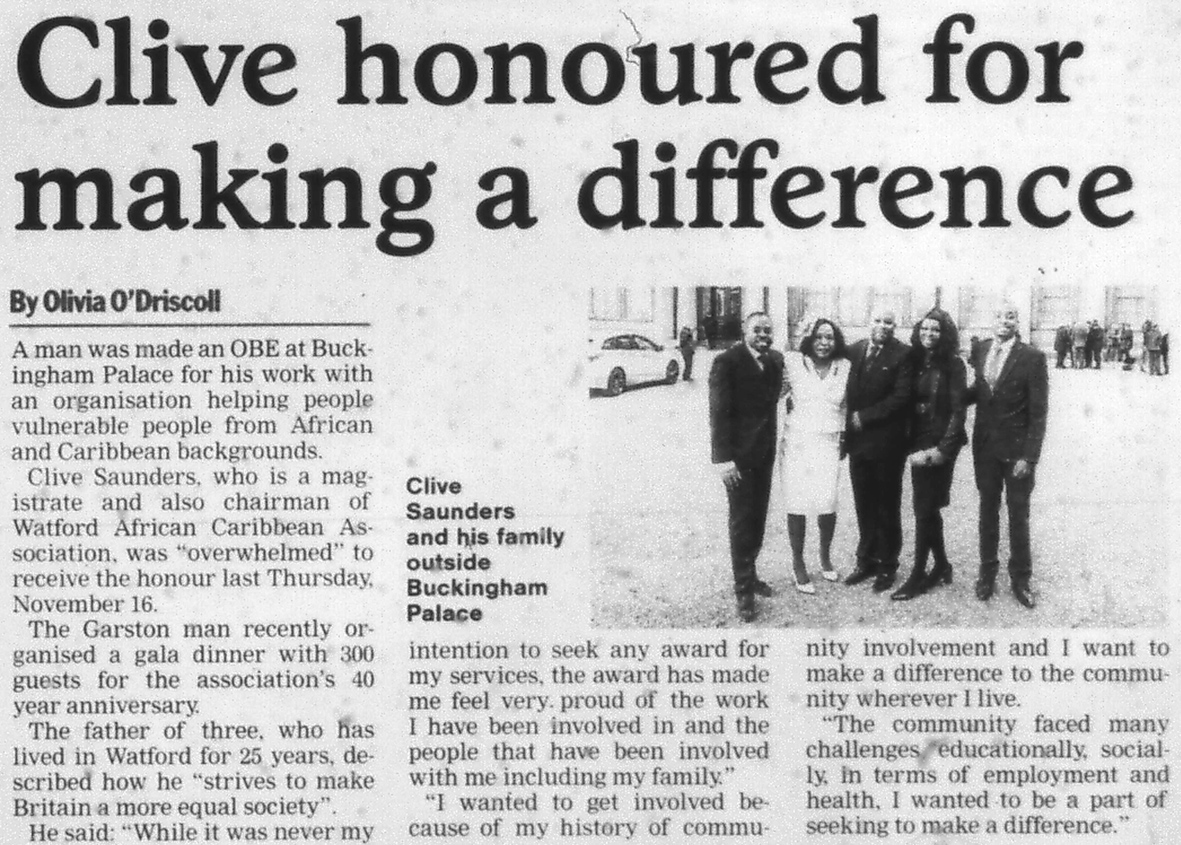 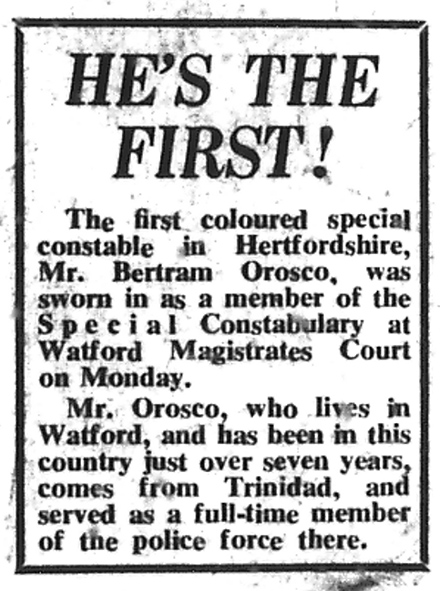 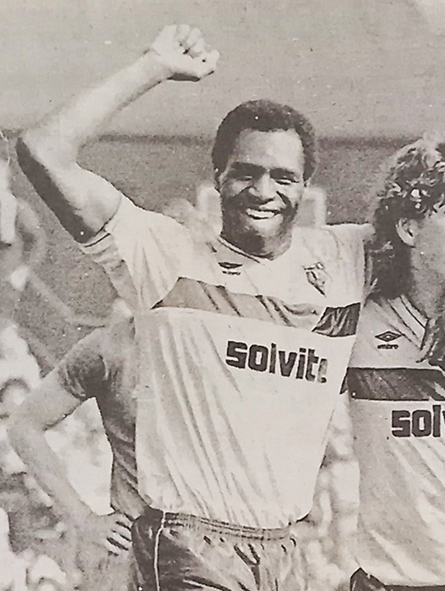 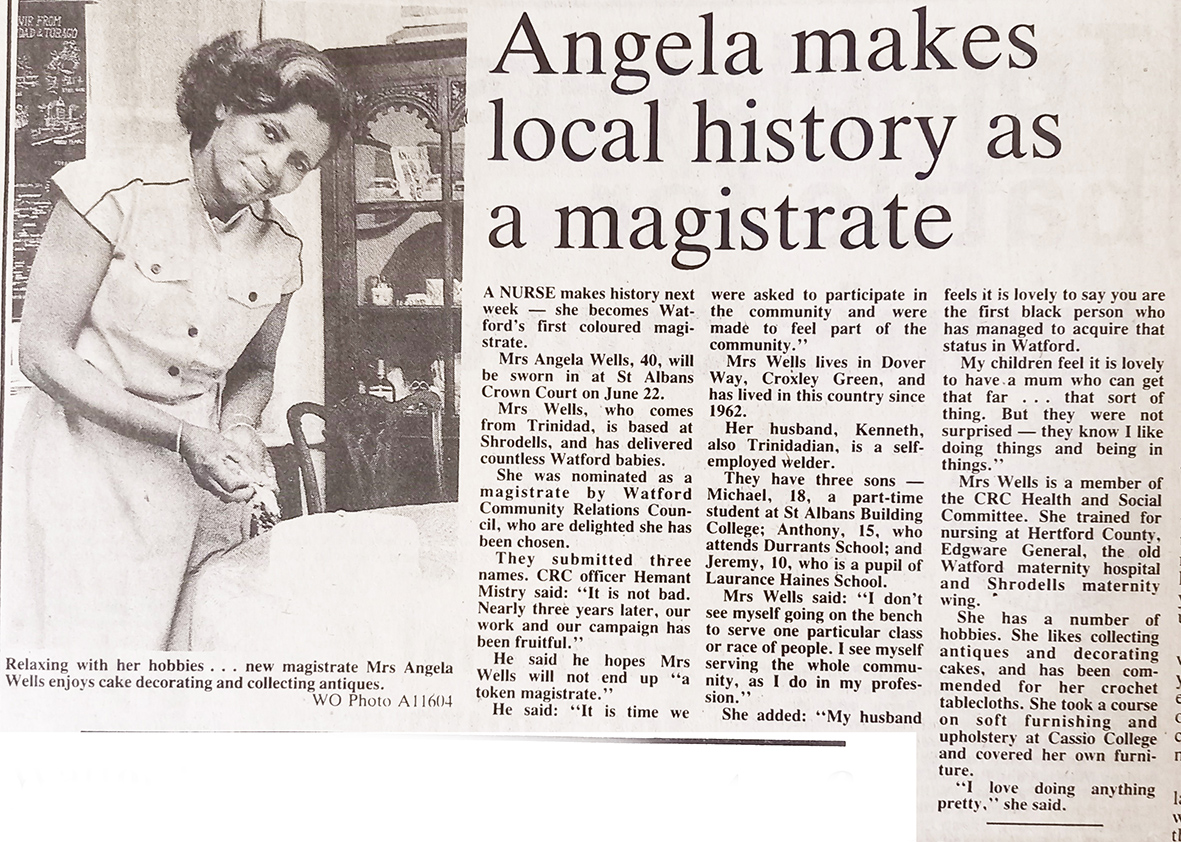 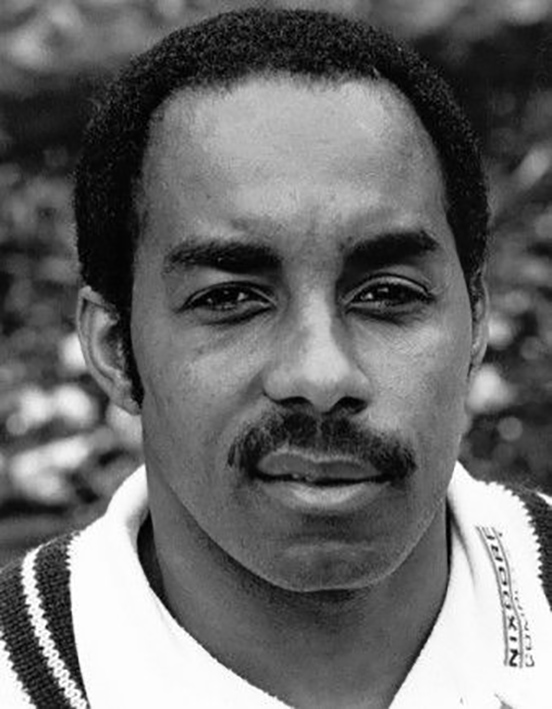 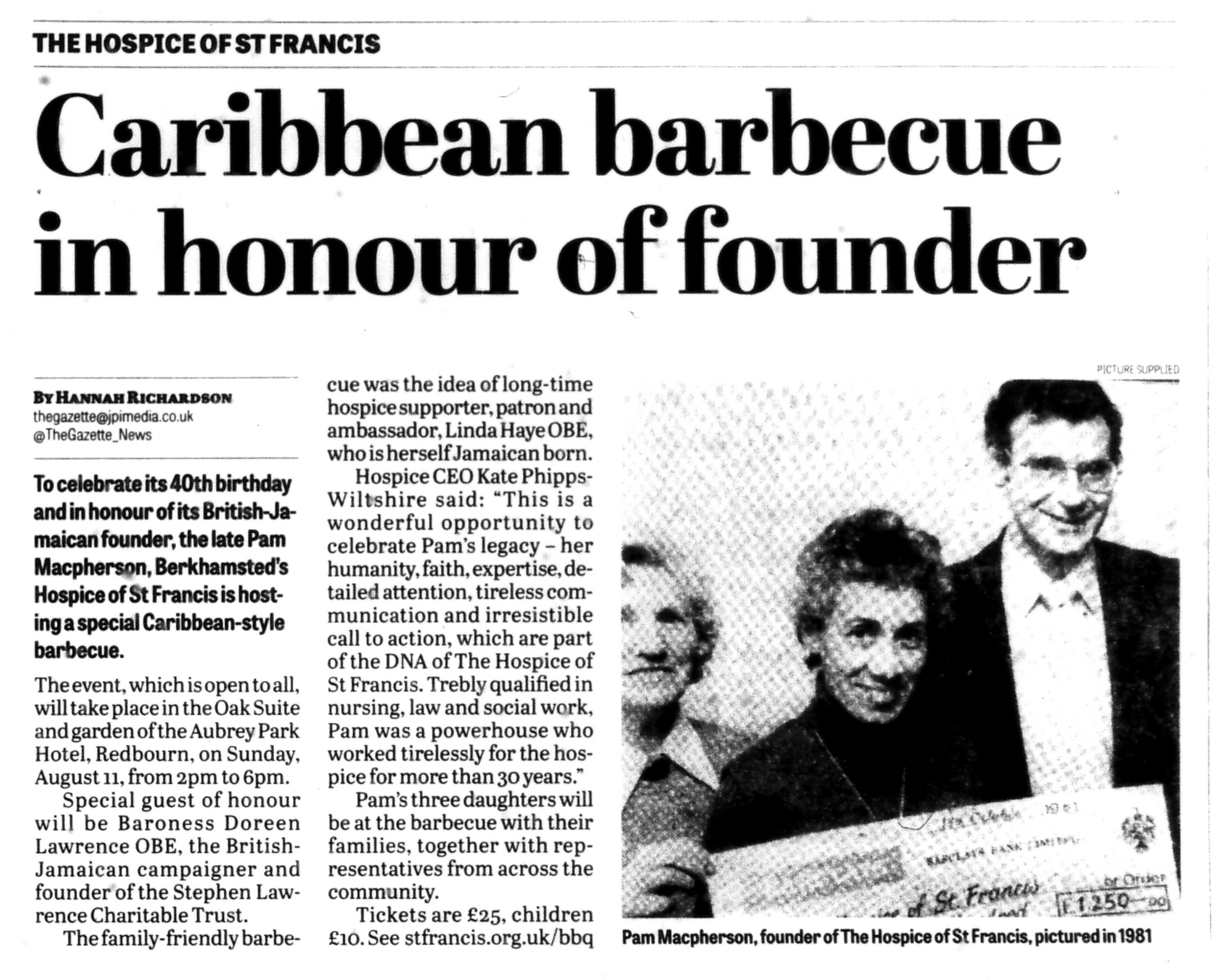 The list of achievements and contributions from people of African and Caribbean descent, born, living or working in Hertfordshire to the social, political, economic and cultural development of the county is long and varied.  Here are just a few; some are well known and others less so.  Please do add more in the comments section below.

Sherma Batson was born in Paddington, to Trinidadian parents who migrated in the 1950s.  She moved to Stevenage with her family in 1961 and became a long standing member of the Borough Council.  She was awarded an MBE in 2008 for service to local government and the community, and became the town’s first female black mayor in 2014.


Althea McLean was a much respected lifetime campaigner for racial equality and Justice. She helped to found the Watford African Caribbean Association in 1976 along side her husband, Arthur and later became a board member and Chairwoman. She was born in Jamaica and moved to Watford in the 70s.  In 1996 she received an OBE for her contributions to charity and the public sector.

Reba Younge came to Stevenage from Barbados as a nurse and retrained as a teacher.  She ran a support group for Asian women and became a foster mother, raising two children in addition to her own three sons.  Read about her here

Gary Younge was born and raised in Stevenage.  After several years of reporting from all over Europe, Africa, the US and the Caribbean, he was appointed the Guardian’s US correspondent in 2003, writing first from New York and then Chicago. In 2015 he returned to London.  He is currently a Professor of Sociology at The University of Manchester.  His mother was the highly revered Stevenage community activist, Reba Younge.

Albert Campbell worked in local politics, challenging injustice and assisting the community whenever he could.  In 1987, he became the first the first black Mayor of Stevenage.

Alicia Shaw is Hertfordshire Constabulary’s first black female Chief Inspector.  She was a police officer for over 25 years and lead of policing in Stevenage when she retired from the role in 2019.  She grew up in Watford and has lived in Hertfordshire since she was a teenager.

Clive Saunders was made and OBE in 2017 for his work with an organisation that helps vunerable people from African and Caribbean backgrounds.  He is also Chair of the Watford African Caribbean Association and has lived in the town for over 25 years.

Bertram Orosco had been a full-time police officer in Trinidad and came to the UK in the late 1950s.


Originally from Barbados, Lionel Daniels joined the force to help other immigrants.

Joe Douglas founded WNK,  London’s first legal black community radio station in November 1989 before closing in 1993.  Born in Jamaica, and resident in Cheshunt, he settled in the UK when he was a teenager and his daughter, Scarlette is a TV presenter.

Born in Jamaica, Blissett played as a striker, and is best known for his time at Watford.  He was the first black player to score a hat-trick for England for England in 1982.

Diane Johnson, better known by her stage name Diane Louise Jordan, is a TV presenter. She was the first black presenter of the children’s programme Blue Pete.  Her parents were Jamaican immigrants who came to London in the 1950s and she grew up in Hatfield.

Heralded as one of Liverpool and Watford’s greatest stars, Barnes won 79 England caps. Born and raised in Jamaica, he moved to London when he was 12 and after starting his career with Watford went on to win two titles at Anfield.

One of the few black professionals of his day, ‘Henry’ Roy Brown played for Watford from 1953-1957. Brown was the first black player in the history of his first team, Stoke City.

Bob Mills helped to create Watford Community Relations Council.  He left Jamaica as a teenager and volunteered for the army in the Secomd World War.  He moved to Watford in the 1950s and did an enormous amount of voluntary work

In 1984, Angela Wells became the first black magistrate in Watford and spent a substantial part of her time serving in the youth court.  She is a trained midwife and retired in 2014.

Roland Butcher was the first West Indian born cricketer to play for England. He attended Shephalbury School in Stevenage and joined Stevenage Cricket Club in 1967, then Middlesex as a professional in 1974. He was selected to play for England against Australia in 1980 scoring 52 runs. In 1981 he toured the West Indies with the England team that at that time included Ian Botham, Geoff Boycott, Graham Gooch and David Gower.


Led by Pam Macpherson, the free hospice in Berkhamsted was founded in 1979.  She was born in Jamaica, and qualified in nursing, law and social work. She worked tirelessly for the Hospice for more than 30 years.

Anthony Joshua grew up in Watford and began boxing in 2007 when he was 18. He is a two-time unified heavyweight champion, having held the WBA, IBF, WBO, and IBO titles since December 2019 and previously between 2016 and June 2019.

Abimbola “Bim” Afolami is a British Conservative Party politician. He has served as the MP for Hitchin and Harpenden constituency since the 2017 general election.  His father, Samuel is a Nigerian consultant doctor in the NHS, who came to the UK in his early twenties.

Paul Yaw Boateng is a Labour Party politician, who was the MP for Brent South from 1987 to 2005, becoming the UK’s first black Cabinet Minister in May 2002, when he was appointed as Chief Secretary to the Treasury.  He settled in Hemel Hempstead whe he was 14.

Lewis Hamilton is a six-time formula one champion and is regarded as one of the greatest drivers in the history of the sport.  He was born in Stevenage.

Clifford Joseph Price MBE, better known as Goldie, is a British musician, music producer, DJ, visual artist and actor. He was born in Walsall to a Scottish mother and Jamaican father.  He has lived in Bovingdon and supported Herts Music Service projects.

Alesha Dixon is a singer, songwriter, dancer, author, model and television personality.  She was born in Welwyn Garden City to a Jamaican father and English mother and grew up there.