Stories of the Windrush Generation 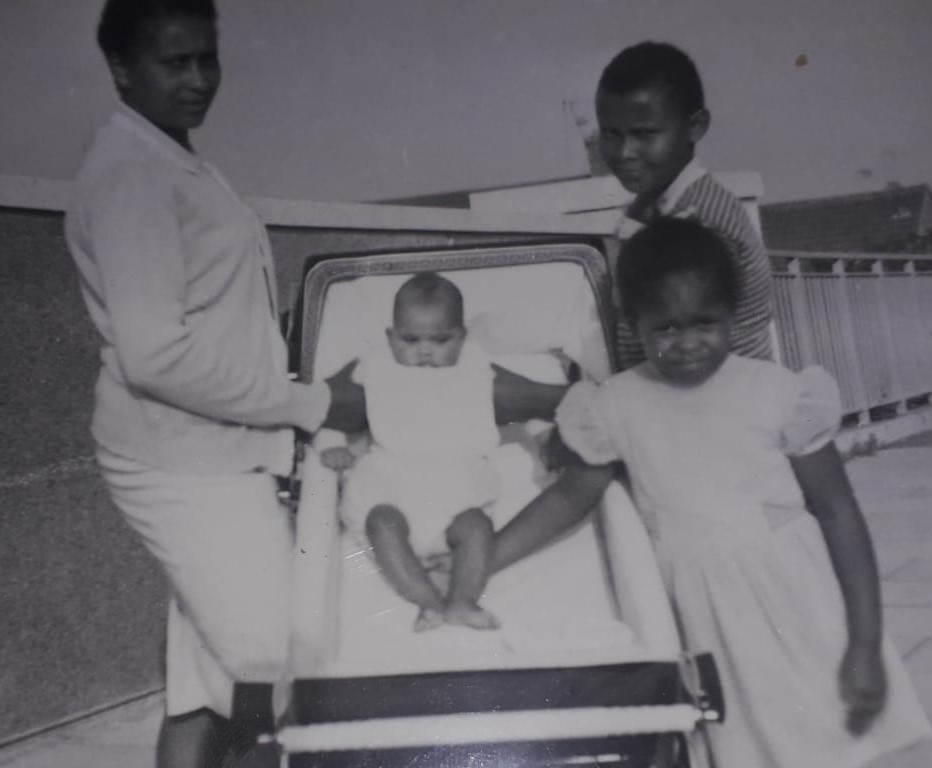 Interview with Lorna Sanson, who moved to Welwyn Garden City in 1960 (August 2020, by Darren Harte)

Interviewer: So how long have you lived in Welwyn Garden City? Lorna: Since 1960.

Interviewer: So what brought you to the town? Lorna: Well actually I was living in Hemel Hempstead and I was travelling through on the…they had one bus in those days that travelled from Hemel Hempstead to Welwyn Garden City and then I got as far as the Church Tree (? Could be the ‘Pear Tree’?) and I fell in love with the town. It was a pub, I think it was a pub and a restaurant and all the cherry blossoms were out and I just fell in love with the town

Interviewer: So were you travelling to Welwyn Garden City to work? Lorna: No, I was coming up to meet Len my husband.

Interviewer: So did Len live in Welwyn Garden City at this point? Lorna: No he lived in London, but he worked in Welwyn Garden over in Turin Road (?), it was a little company called Infrared.

Interviewer: So you decided to move to the town. What were the things that, apart from the cherry blossom, that attracted you to the town? What were the things that made you go wow we’d love to live here? Lorna: In the whole the people that I met were very friendly and very kind to me and the people that Len knew, but they’ve all passed away now, so they were very kind and you know, showed kindness to us, made us feel at home, so I didn’t have any worries.

Interviewer: Whereabouts in Welwyn Garden City did you settle at that time when you moved here? Lorna: I moved over to Ingels and I’ve lived here since 1960.

Interviewer: So you’ve lived in the same house since then? Lorna: The same house, because when I moved into the house it wasn’t even dried yet, it was still damp from the workmen.

Interviewer: So you lived quite near one of the out of town shopping areas, where you’d be near Shoplands (?), wouldn’t you? Lorna: Yeah, near Shoplands, because Shoplands came after, Shoplands wasn’t built until late…coming up into the 70s.

Interviewer: So where did you finally work in the town? Lorna: When I moved to Welwyn Garden City I actually didn’t start working straight away and then when I did start working…

Interviewer: So you worked at Murphy Radio then? Lorna: Yeah, just for a short while.

Interviewer: Yeah and where did you work after that? Lorna: And then after that I stayed home to look after my children and then I started working at the Sherrardswood school, which was a boarding school at that time.

Interviewer: And what sort of work did you do there? Lorna: You had the students who stayed there who were boarders, but they had to…if they weren’t feeling well you had to have somebody that…you had like a house ma’am or something.

Interviewer: I suppose you’re a bit like a mum in a way, I suppose? Lorna: Yeah, because you had to make sure they remain in their beds if they are not feeling well.

Interviewer: And how long did you work there? Lorna: I stayed there not very long, because after a while I left, because I was expecting my…my baby, so I left and stayed home again looking after three girls, three children and then after that I tried getting a job…well I must let you know that there are certain firms in Welwyn Garden City at that time that wouldn’t employ black people, that was the only drawback, because you had like Nabisco, which was, what do you call it, the mainstay of the town, they never really employed black people until late 70s, neither SmithKline Beecham, but it wasn’t Beecham it was SmithKline…French.

Interviewer: (Interrupts) …French. Lorna: They never employed black people, until I think it was in the late 70s. They started employing people after Mrs Thatcher came in power.

Interviewer: Do you think that was because Mrs Thatcher was in power? Lorna: I don’t know, but it was after…it was some, some ruling…it was some act that was passed and then suddenly when they couldn’t get people to work they used to get the workers from Luton to work at Nabisco and they gradually started employing more blacks to work, you’d find there was this…suspicious feeling about…shall I employ this person.

Interviewer: And so some employers would take you on the colour of your skin rather than your ability? Lorna: Yes and then you had the position with the banks, they were just as bad, because they wouldn’t…didn’t look on you as a black person, you could go and say ‘May I have a loan, because I’m working and I would like to buy something or I would like to do something and I need the loan?’ They would look at you and say ‘No, you’re not to be trusted,’ so that was another big drawback for lots of black people living in the town centre, but not only in the town centre, it was all over the country.

Interviewer: And when do you think that attitude changed? Lorna: I think the attitude gradually changed about in the 80s when NAM (?) had more people moving into the town and the town started expanding and things gradually changed.

Interviewer: So, on a…on a positive note, what…what things do you like about the…actually living in Welwyn Garden City, what are the things that you…draw you to say the town centre or maybe some of the open spaces? What are the things, the positive things that you like, even today? Lorna: The peacefulness of everything, you know the…so quiet, you haven’t got that distraction, like living in London, the noise , the fumes of traffic, I just like the countryside. That was why. It reminded more…it reminded me more of Jamaica, with the open space.

Interviewer: And jumping back, when did you come from Jamaica, at…at which point in your life did you come?  Lorna: They came over in 1956, Windrush people came after the war. That’s the mistake a lot of people have, that we were Windrush people, we weren’t, the Windrush people came over after the war and the majority of us who came over here during the 50s, we were actually invited by Churchill and Enoch Powell to come and help to build the country, that was their big speech when they came to the West Indies, they say ‘We need young people to come and help to build the country,’ but we were disappointed when we came here to realise what they told us was a load of rubbish.

Interviewer: In a…did you feel you’d been lied to? Lorna: Yeah, we were lied to, even by priests, because I remember one priest…preacher was at our church and he said ‘Oh England is such a lovely place, every house has got an orchard and the people are loving and kind and willing to help you,’ and would you like me to tell you what happened to me?

Interviewer: Please do. Lorna: I went to church and I was told to go and sit at the back, because you can’t sit in the front of the church and every seat I took I was told ‘You can’t sit there,’ and I ended up sitting at …more or less, at the door and one priest actually came to my house and said to me ‘Why don’t you go and find your own kind to worship with?’ That was the type of things we had from the people who were in authority, the ordinary working people that I met, especially those who moved in Ingels with me, were curious, they just wanted to learn about our way of life and become friends, but you find that the people who were in authority, they gave more trouble than the ordinary working class people.

Interviewer: So we move on to living in Welwyn Garden City in 2020 and what sort of things in the town today do you like about the town still and which things don’t you like about the town? Lorna: Oh, I don’t like how things have changed, they’re…the changes haven’t been, nothing has changed…improved in my opinion, if anything it’s worse. There isn’t a lot of things for young people, in the early part of the early 60s, 70s, young people had a chance to go to the campus at the cinema, where the cinema is, they used to go for dancing or they had youth clubs and then the council suddenly stopped all those things, so then you had nothing for young people to do and the only thing that I’ve noticed that they were interested in is making sure that in front of John Lewis is well kept, but the rest of the town um-hum, they don’t…there is no interest in the rest of the town.

Interviewer: Do you feel like that the standards have dropped from…(interrupted) people? Lorna: (Interrupts) Yes, very dropped…because I did tell a councillor that he’s made Welwyn Garden City look worse than a third world country (laughs).

Interviewer: And what was his answer to that? Lorna: He wasn’t very pleased, he said I shouldn’t have said it, but I said it. It is the truth, because so much litter used to be about the place, they didn’t have an interest in anything, except making sure just the one place in the town centre was looked after.

Interviewer: So, a positive thing about Welwyn Garden City in 2020, we’ll put…put aside that bit, but generally living in the town, do you like it as much as you did or are the…the neighbours and friends around you, are they as good as they ever were? Lorna: Well, most of the people that I knew when I moved to Garden City, they’ve all passed away, these are new young families, the majority of them went to school with my children and they still speak to me and they still inquire how we keeping and some people who move in recently look on us with suspicion, as if to say ‘Um, who are you?’ When I moved to Ingels, I was a…second family to move in the cul-de-sac, but the majority of the families have passed away now, but I had no regrets with any of them and the youngsters that are…that are living here in this cul-de-sac now are very…very friendly and they always say, ‘Go and ask Len to help if he can help’ or ‘Ask Lorna,’ but we have no problems with the young families that move around now. As I’ve said I’ve done quite a lot in…in Garden City, because I worked at the…do you know the Isabel Hospice? Well, I worked there for twenty-one years as a volunteer, are you surprised?

Interviewer: Yeah, that’s excellent, that is excellent stuff. That’s a Welwyn Garden City charity isn’t it? It’s born and bred in Welwyn Garden City, ‘course the Isabel Hospice is at Hall Grove isn’t it? Lorna: That’s Hall Grove, so I was there and I still keep in touch. I used to be there every week, since…but since this Covid thing and everything’s shut now, I haven’t been back because the place is closed.

Interviewer: Yeah, so you…you can’t really do any volunteering at the minute? Lorna: No. No, I haven’t…I gave up being a volunteer and then became a patient.

Interviewer: Yeah. Lorna: It’s great, you can’t fault them. They really look after everyone, regardless of whatever illness you have, they try their best.