In the 1950s and 60s, many of the first generation of African Caribbean migrants faced discrimination and predjudice on a daily basis.   This was not officially addressed until new legislation relating to race was introduced in the 1960s and 70s.   The second generation of migrants saw themselves as British and were not prepared to tolerate discrimination.

In the 1970s and 80s, minority communities in towns like Watford, Stevenage and Hitchin began to stand up to racism and many associations and groups were formed to promote culture and support networks.  There were festivals, concerts and carnivals to promote racial harmony, as well as large-scale demonstrations.


In 1978 a concert in Hitchin organised by Rock Against Racism, was marred by a minor disturbance which was later  exaggerated in the local press.  The event was organsised bya group of musical activists who aimed to unite young people from different cultural backgrounds.  The scuffle involved a couple of ‘skinheads’ and the band, Scritti Politti; no-one in the audience was hurt.

The Watford Anti Racist Committee (ARC) was formed in the late 1970s in response to increased racist activity in the area, particularly by the far-right political party, The National Front.  In 1978, Raphael Tuck, the local MP, called for the party to be made illegal.  [Founded in 1967, it reached the height of its electoral support during the mid-1970s and, like several similar organisations, was banned from facebook in 2019.]

In 1980, The National Front had been posting their literature through letterboxes in the town.  The leaflets warned that an upcoming multi-racial festival would cause a disturbance that the police would ignore and that residents should be scared.  The ARC delivered their own counter bulletin to householders and the local council voted to bar the National Front from holding meetings in council premises and the incident was investigated by police.  The ARC leaflets declared, ‘Lets keep Watford a friendly town and fight race-hatred’The hugely successful initiative, The Watford Multi-Racial Festival, first took place on 16 August 1980 and was organised by the Watford Race Relations Council, The Watford African Caribbean Association and numerous other groups.  The day was enjoyed by an estimated 4,000 people and there were no disturbances.

Into the 1990s, police and local councils in Hertfordshire continued to face critisism for not doing enough to combat racial discrimination.  In response, organsisations were set set up by the police and other agencies to plan and co-ordinate policies to rid towns of racism, such as such as the Watford Racial Harrassment Forum, formed in 1994. 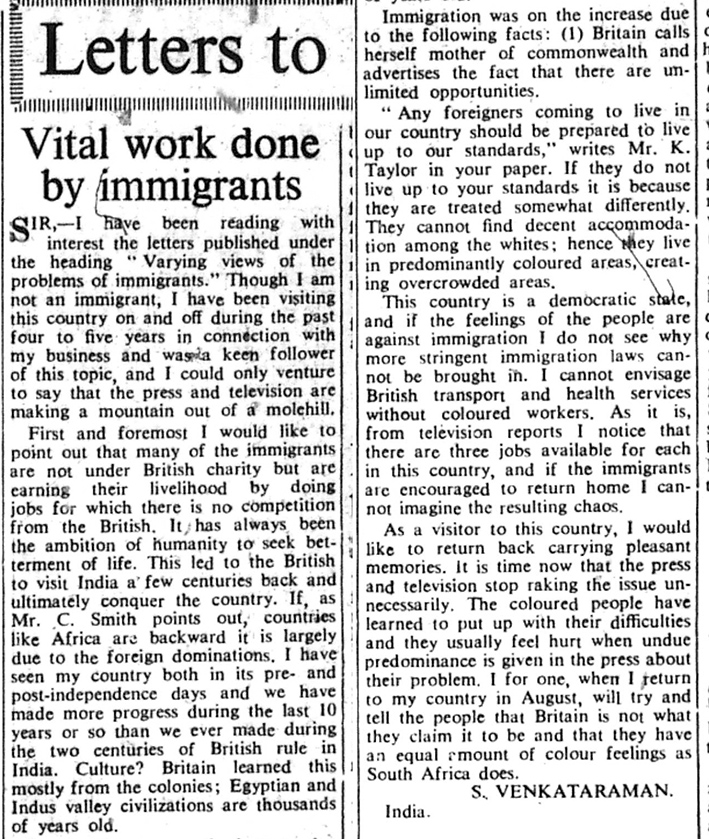 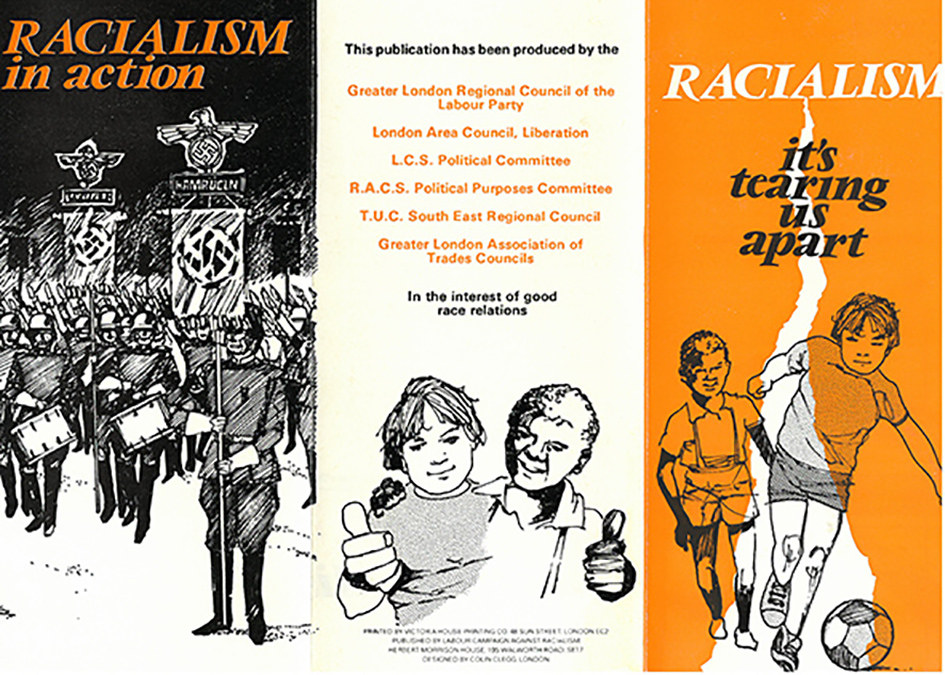 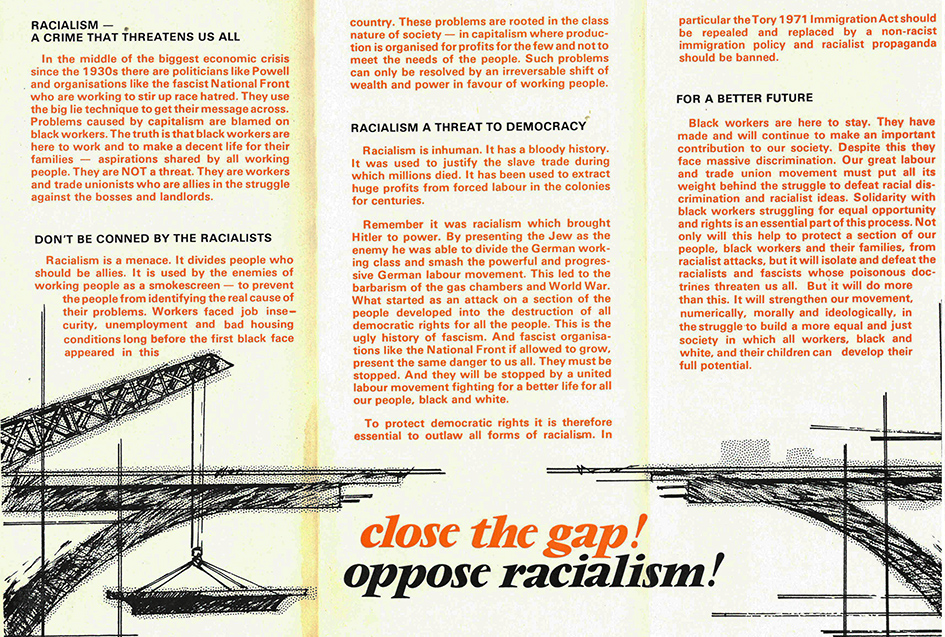 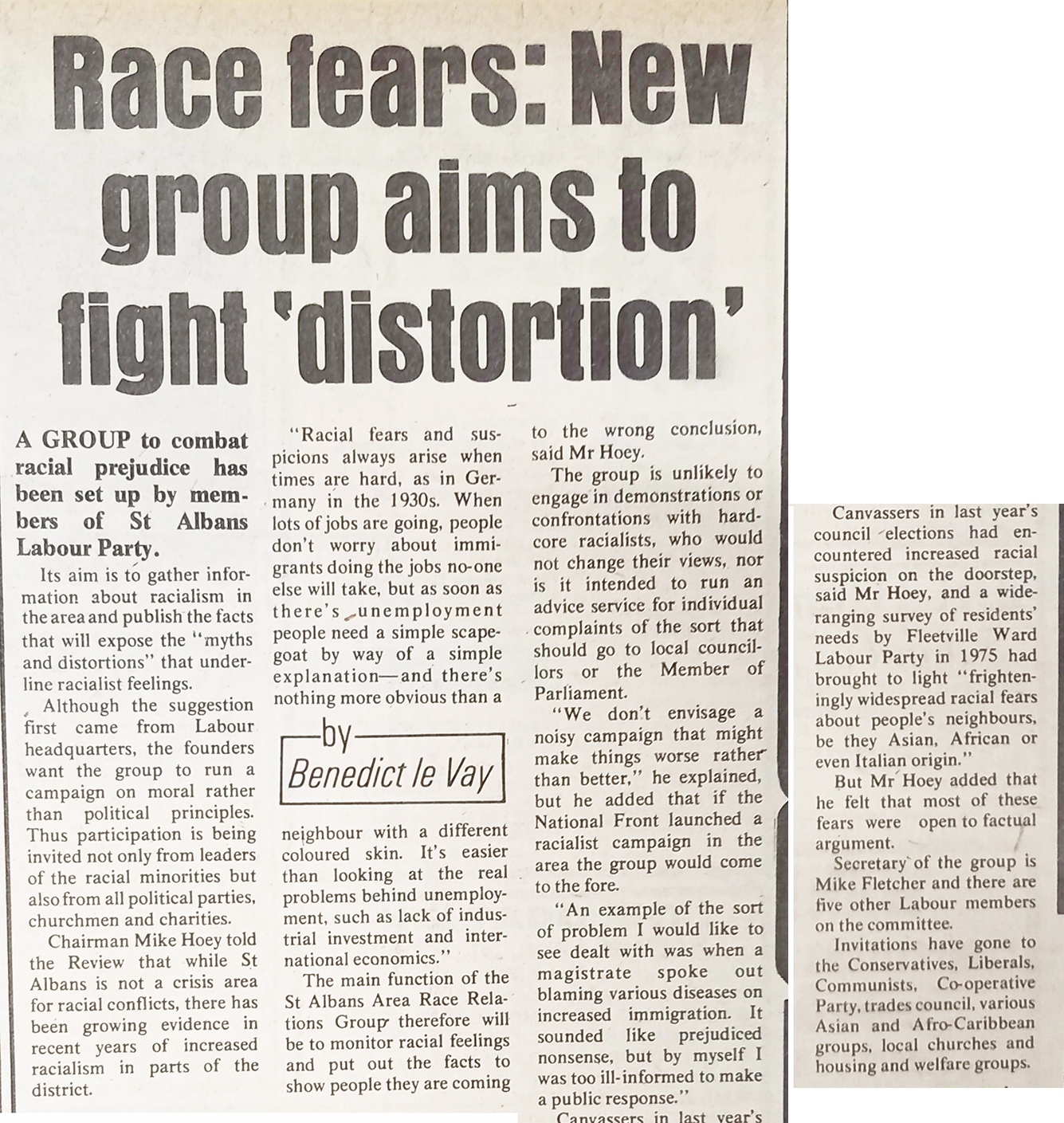 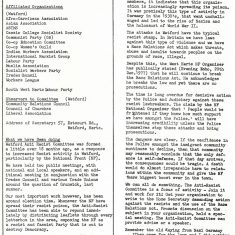 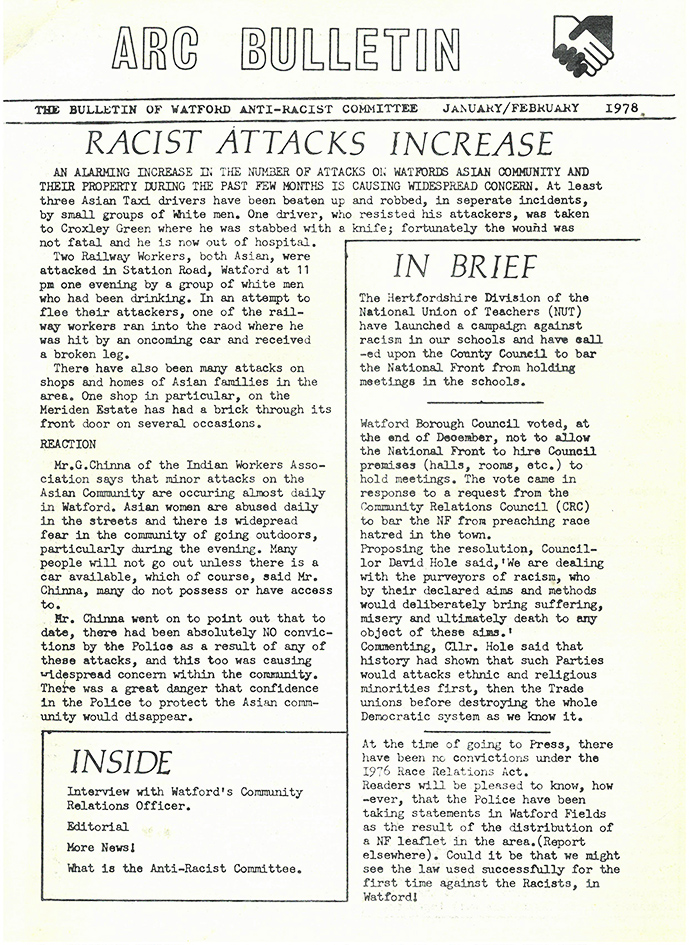 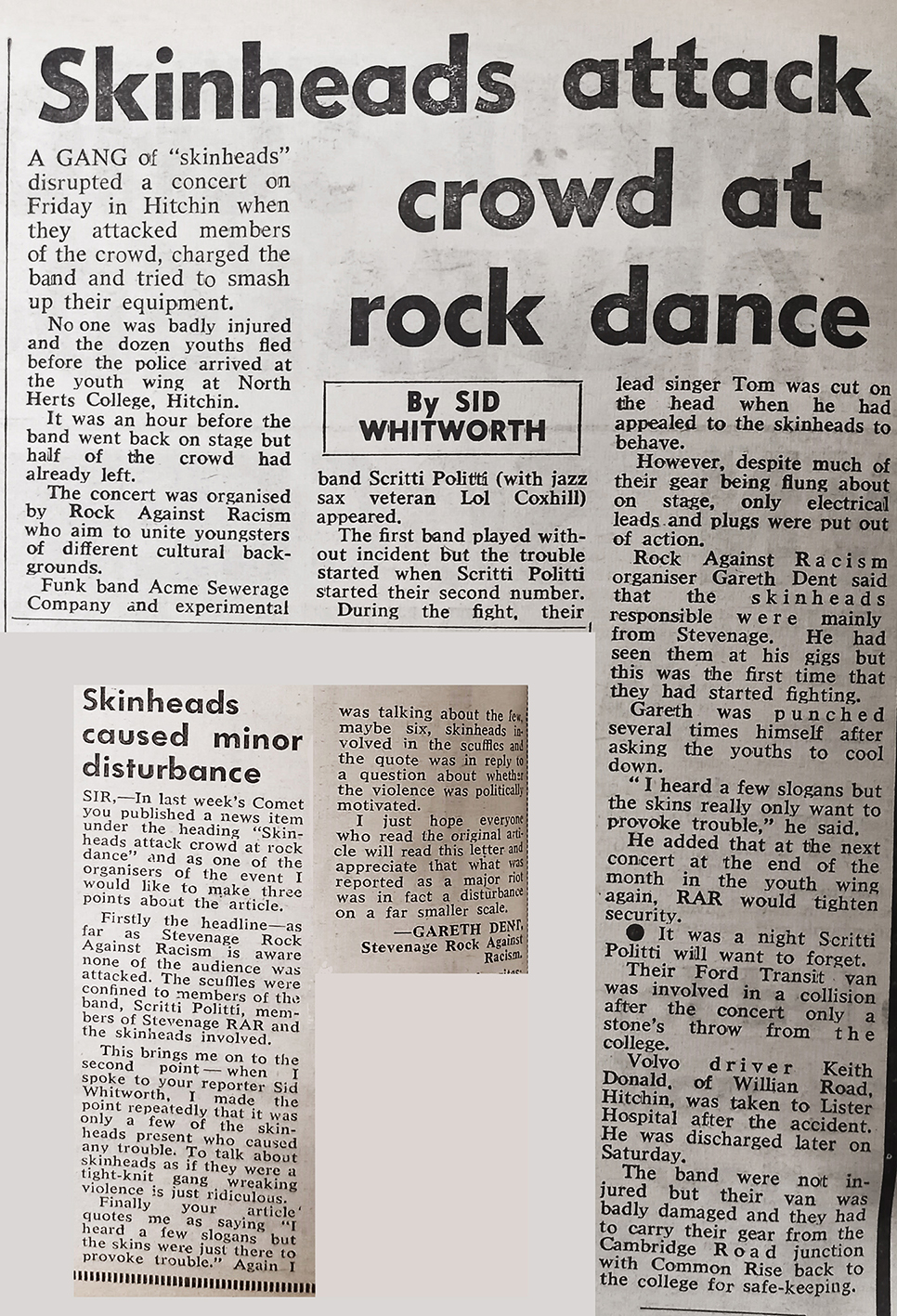 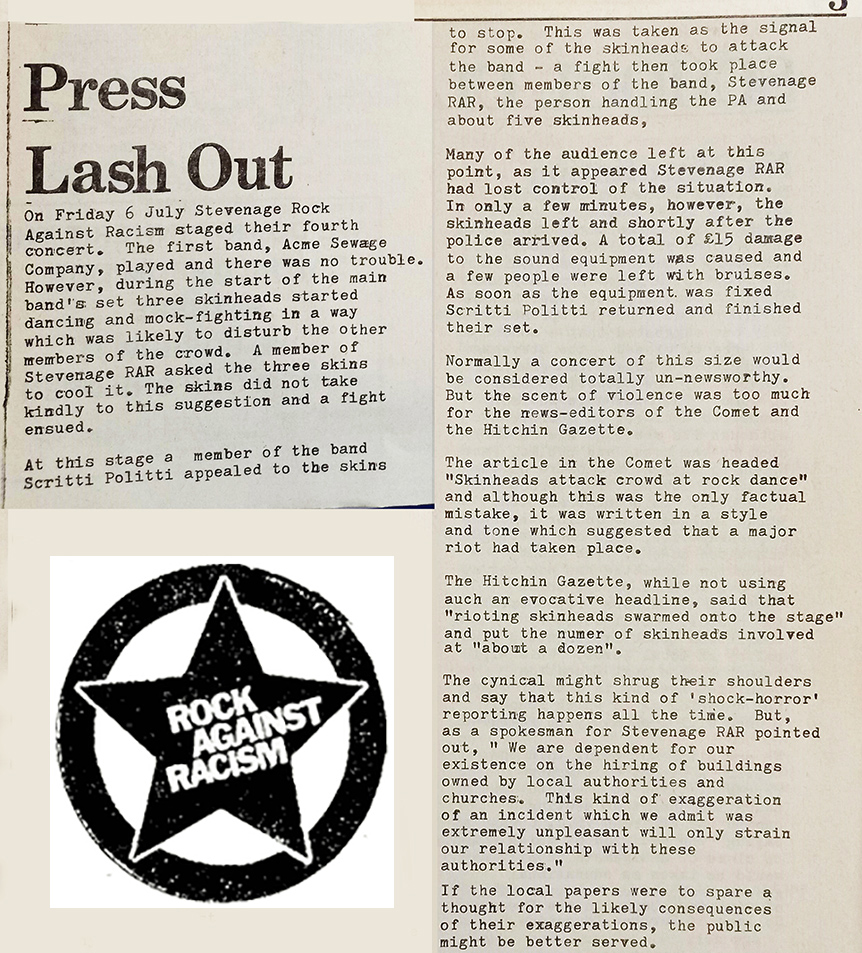 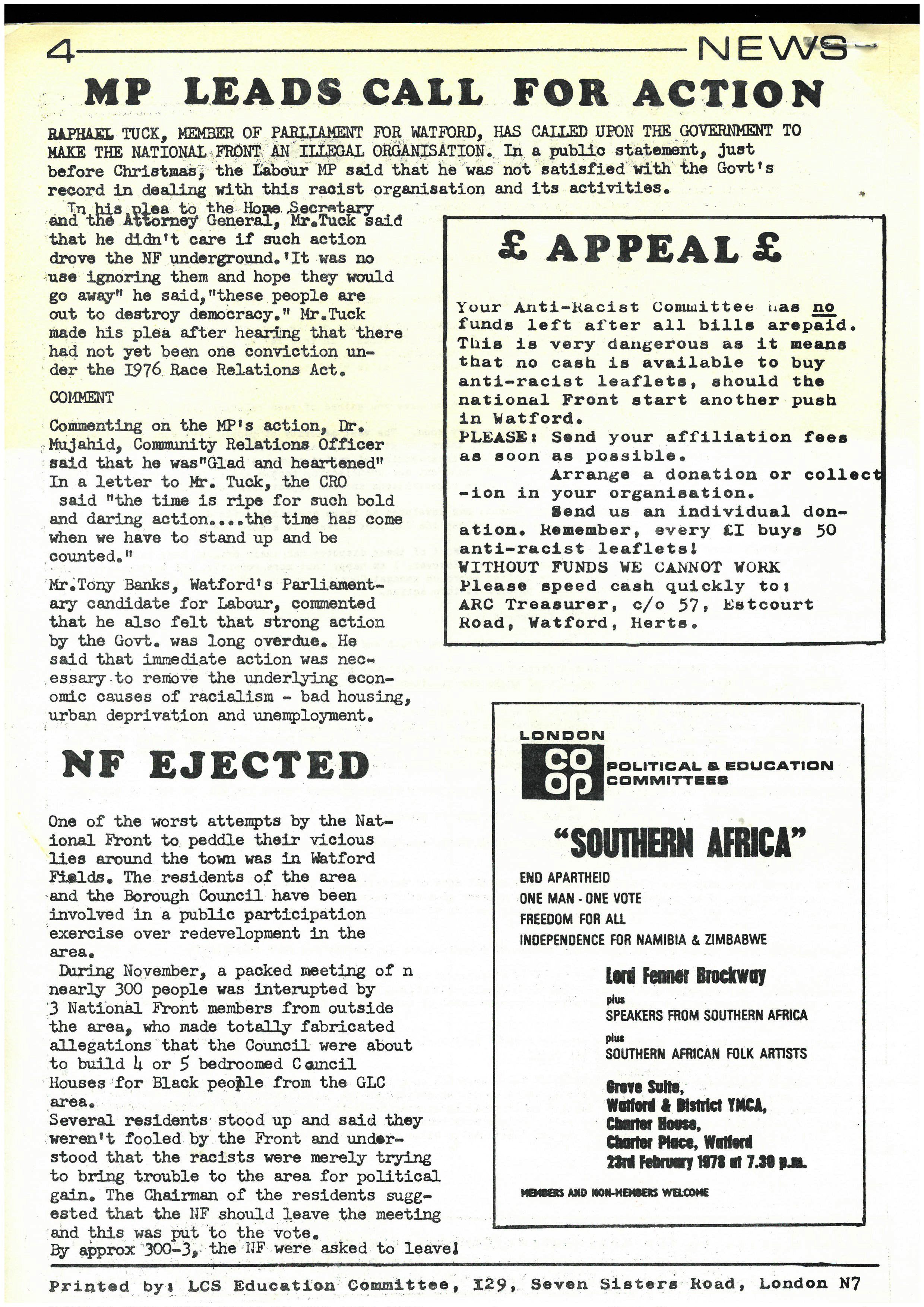 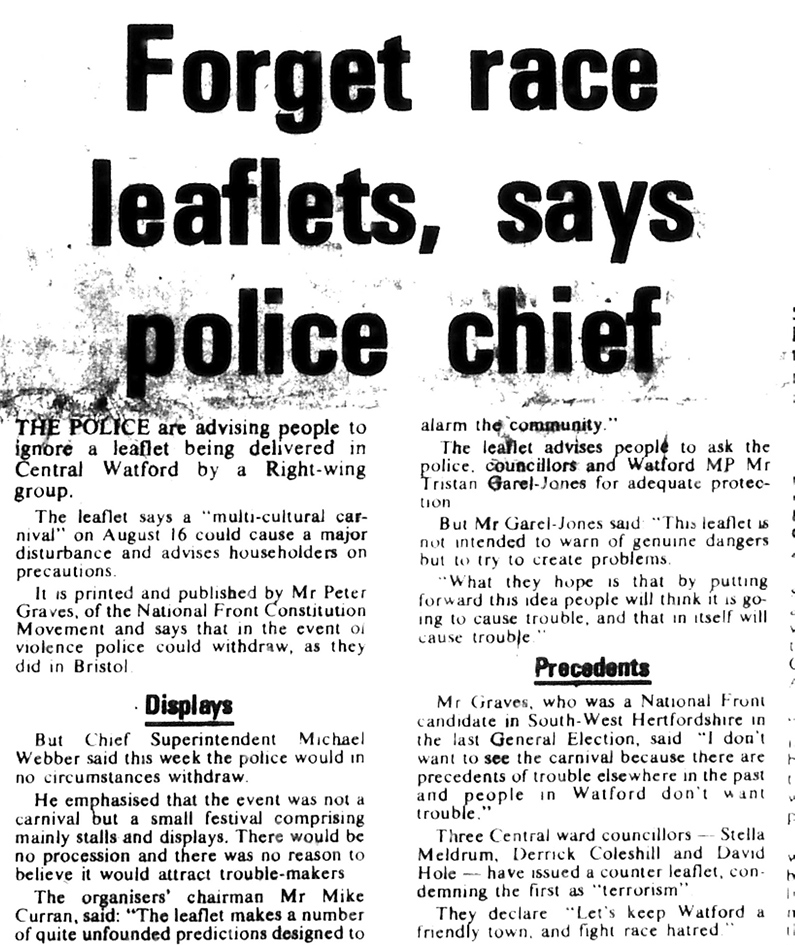 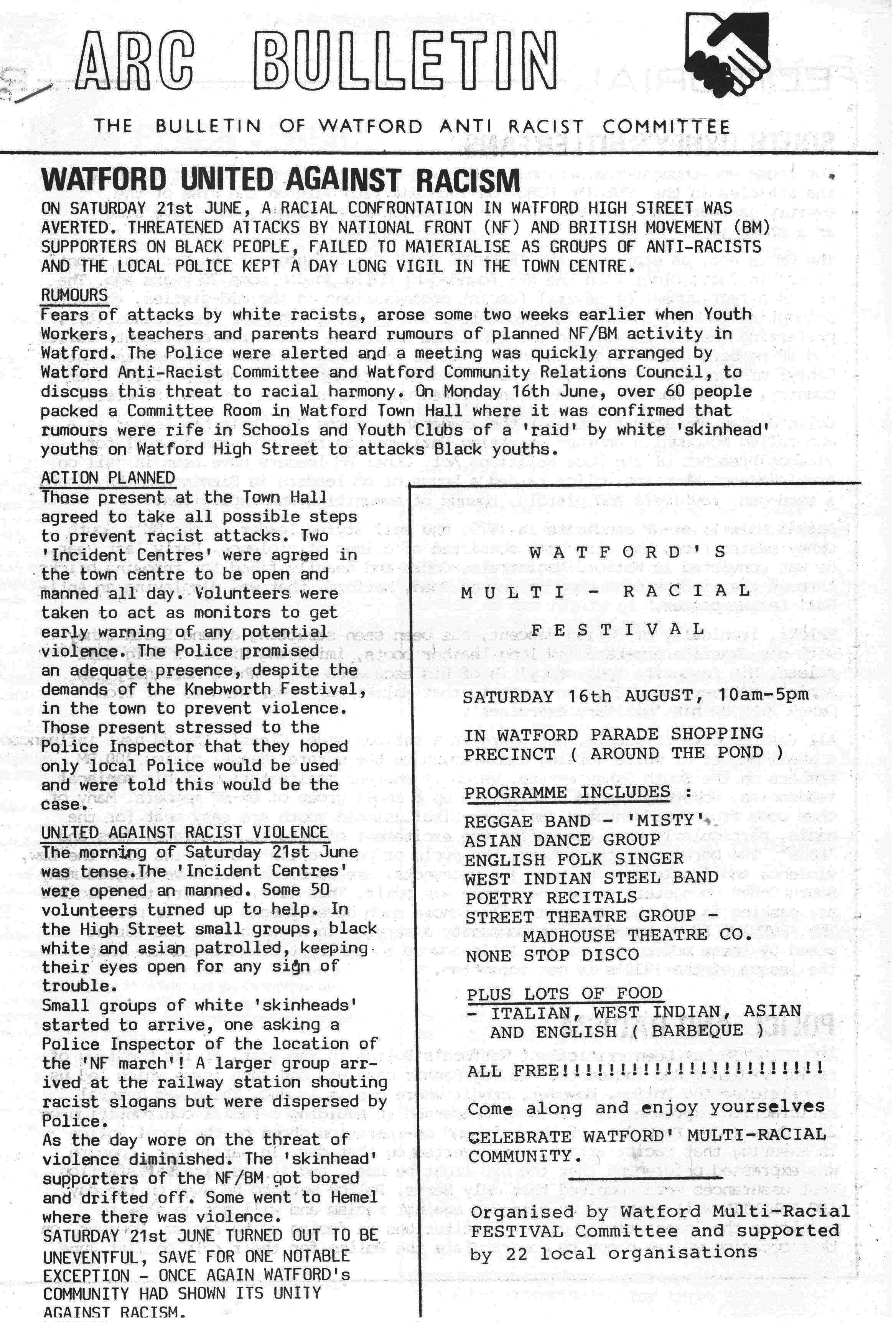 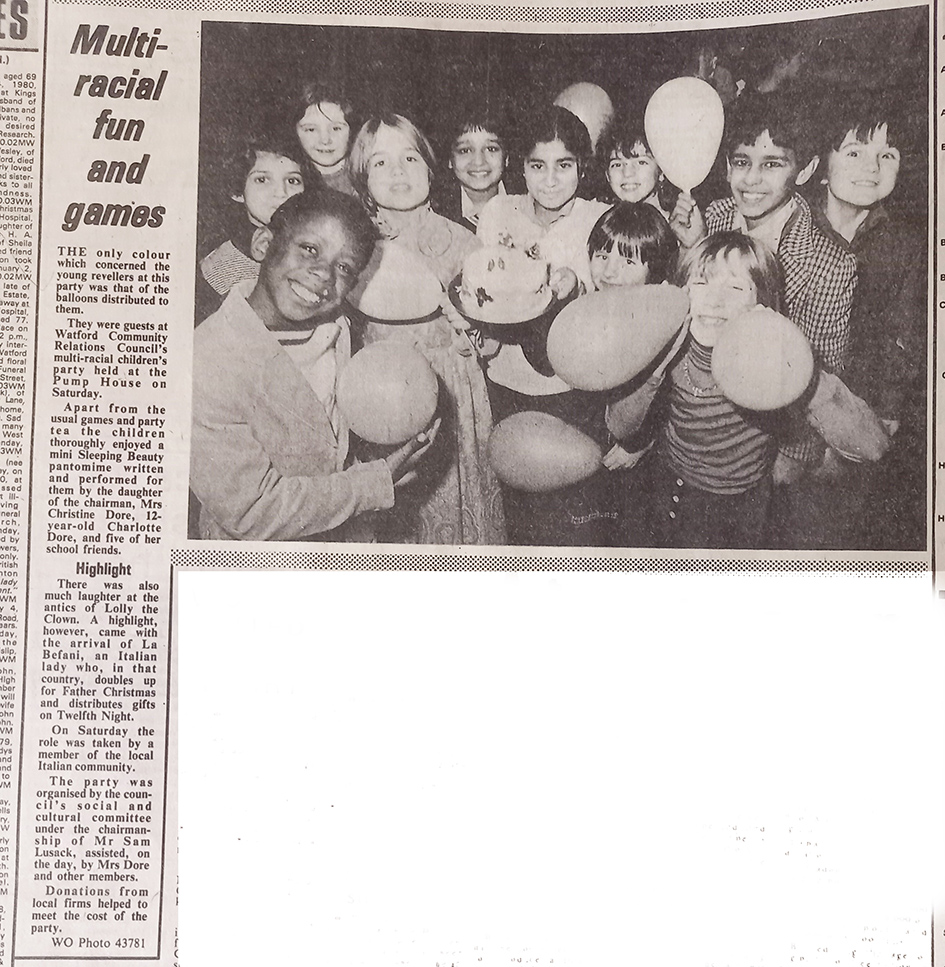 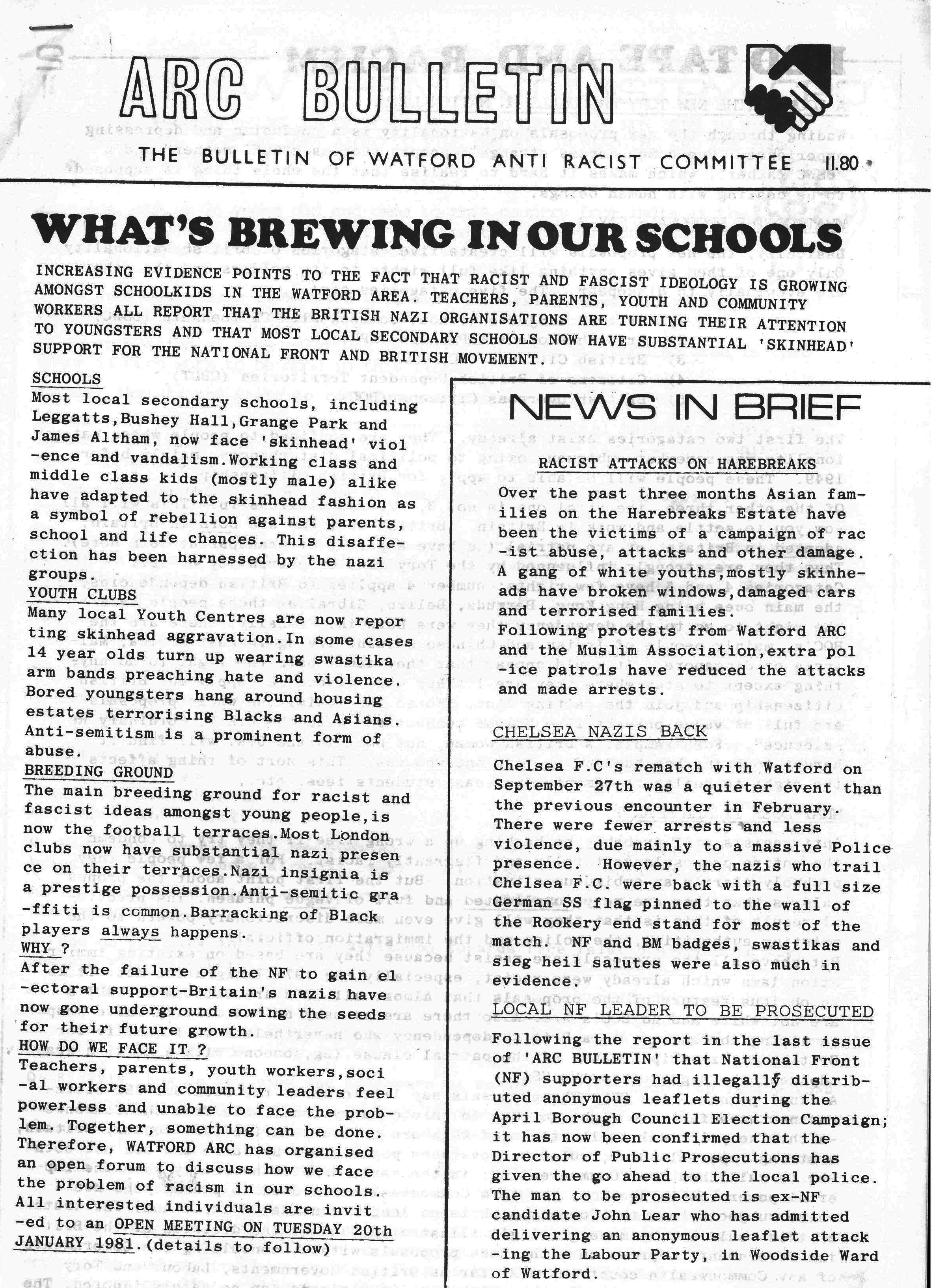 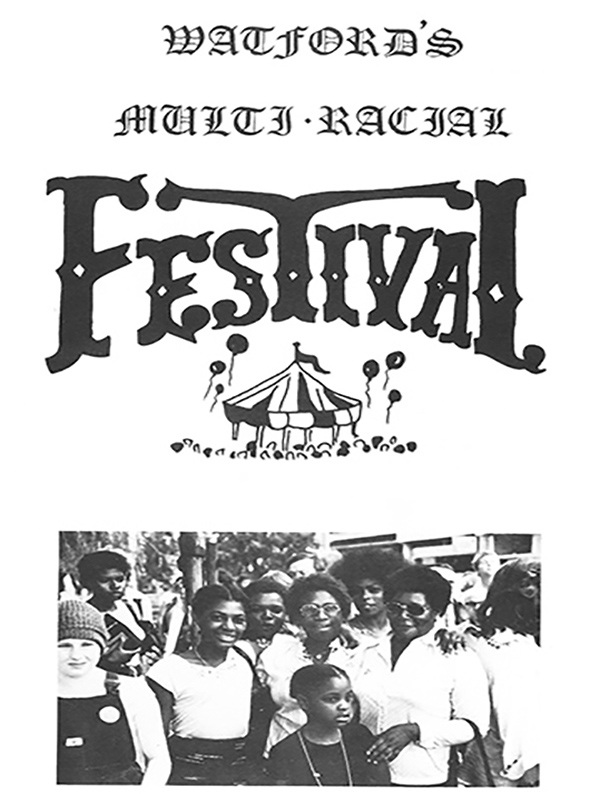 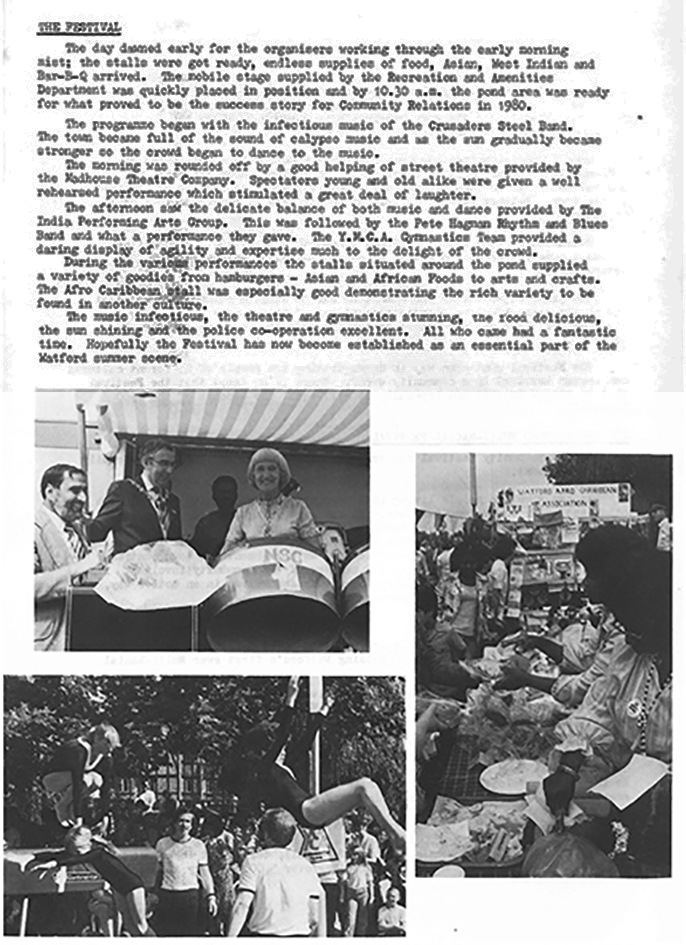 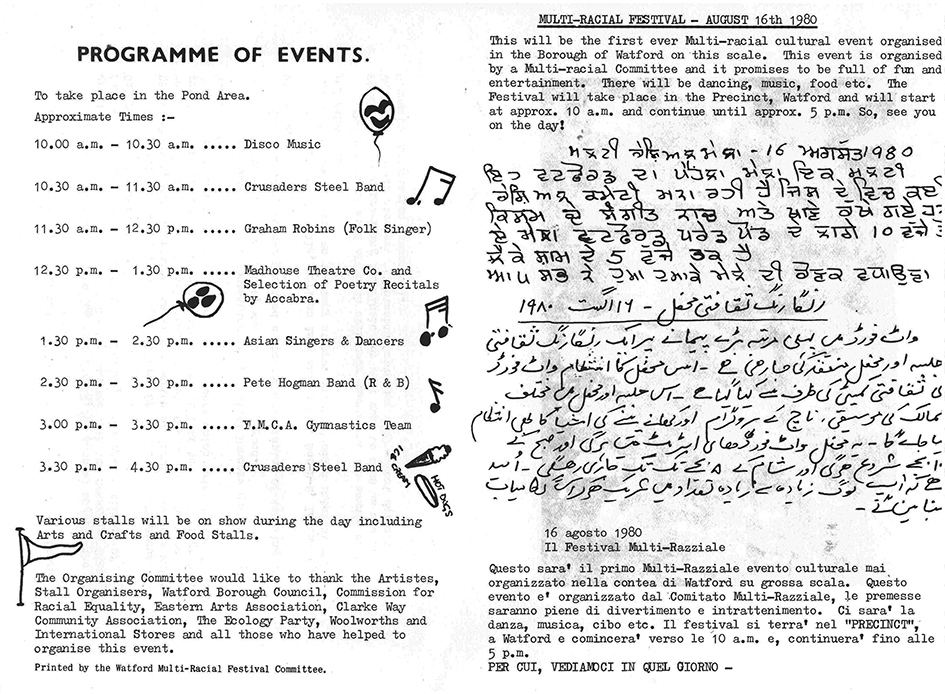 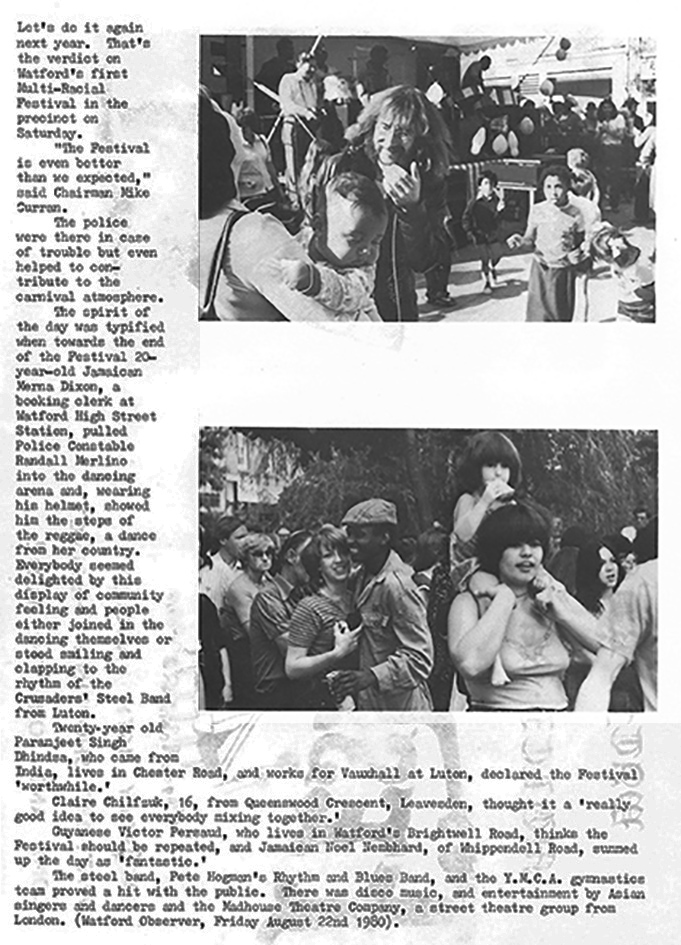 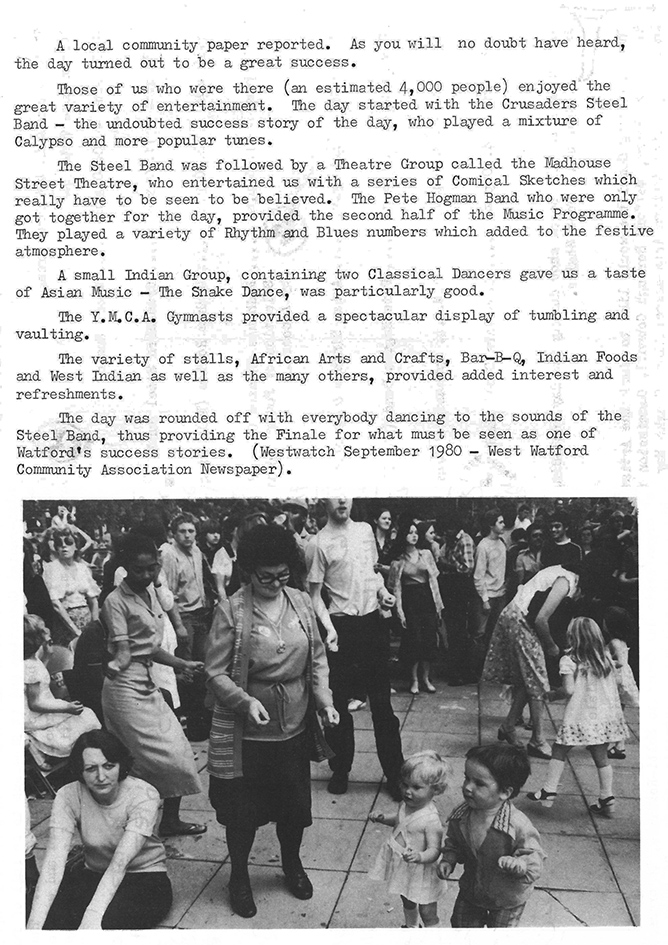 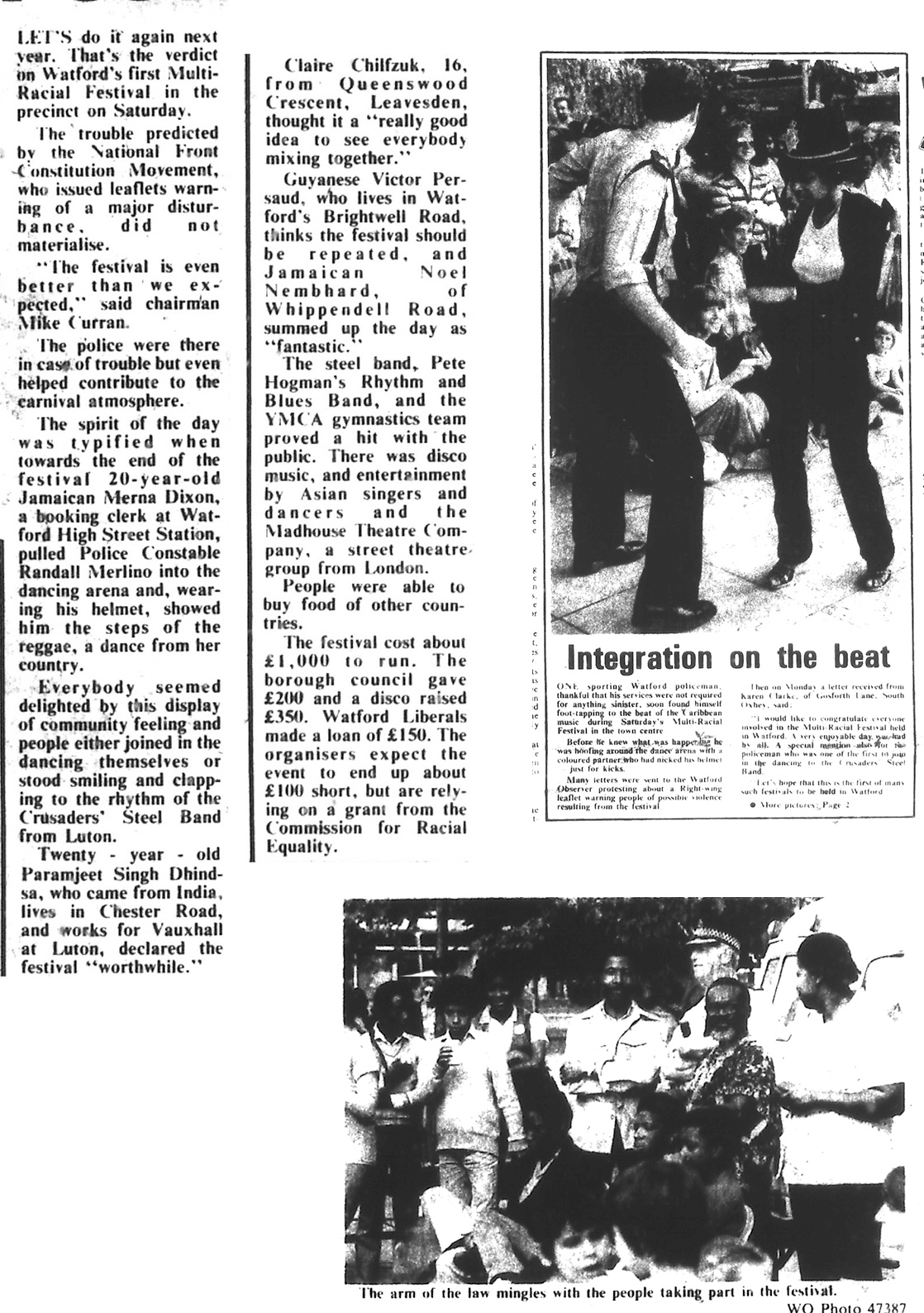 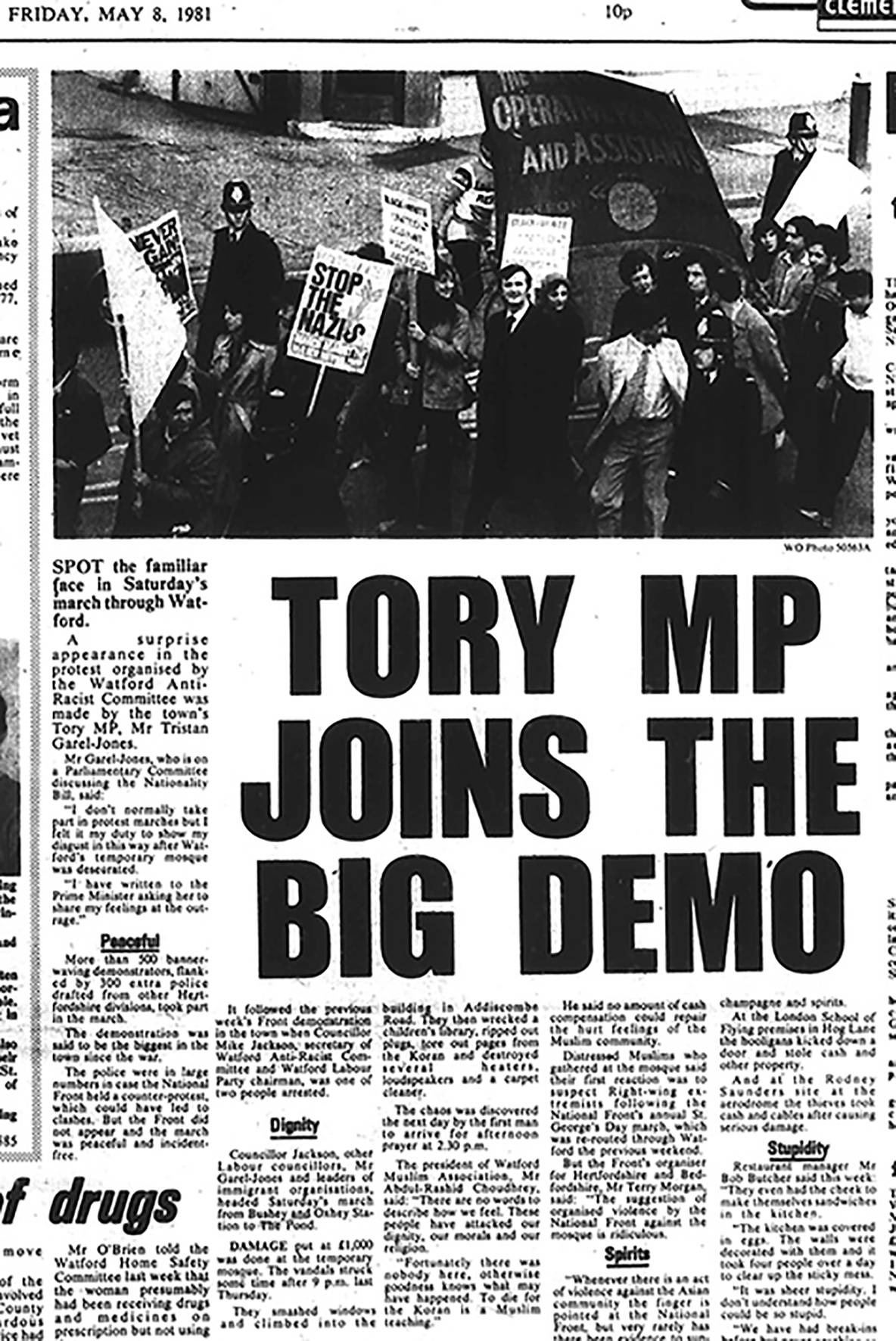 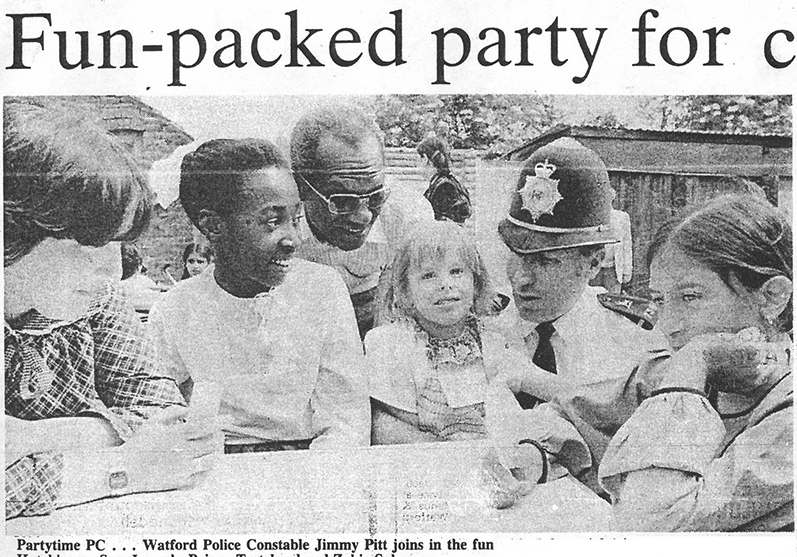 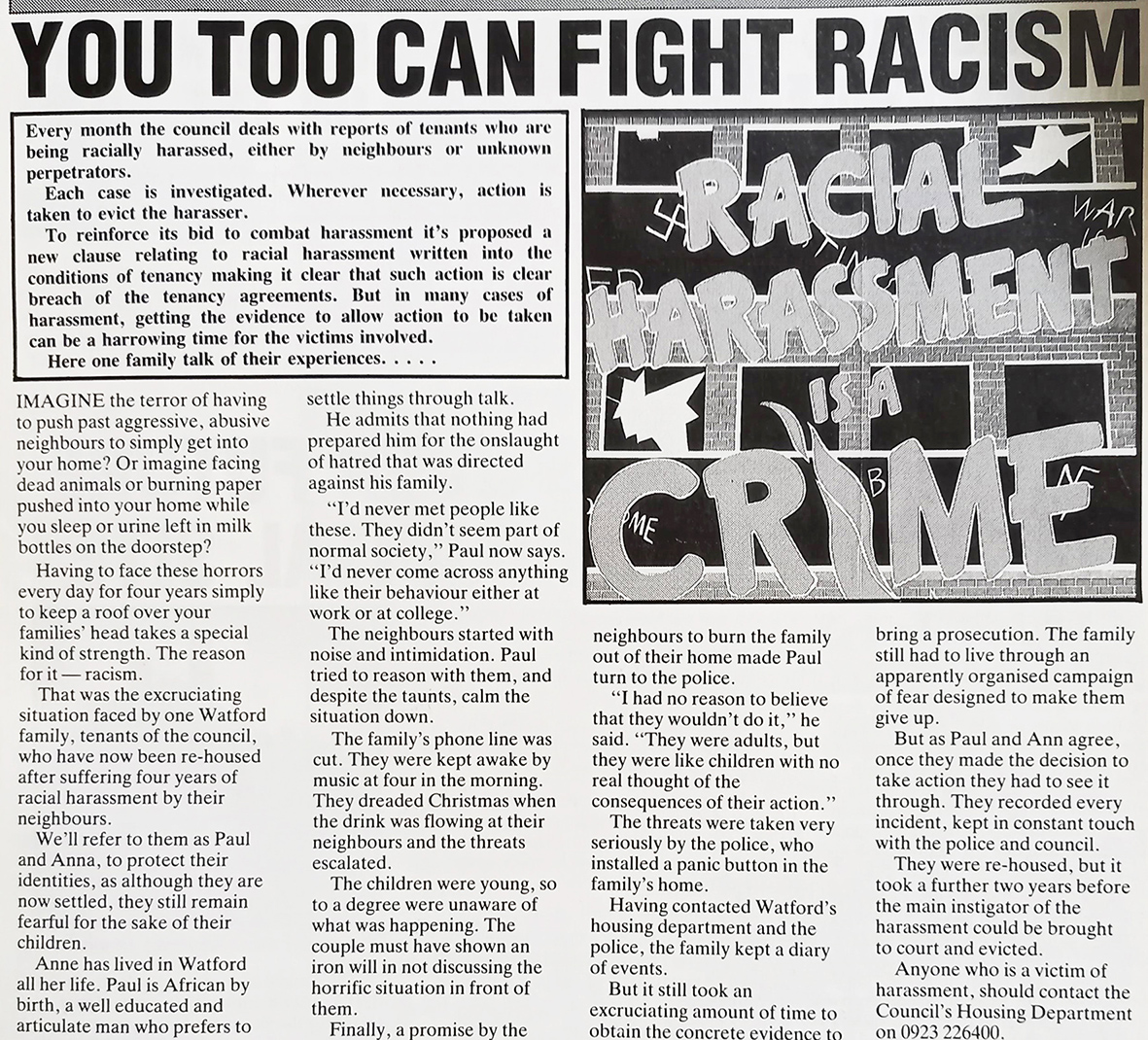 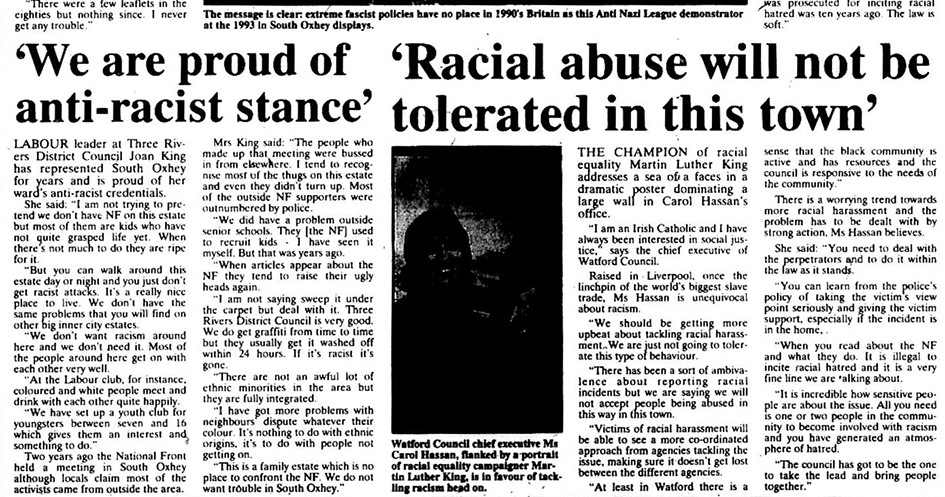