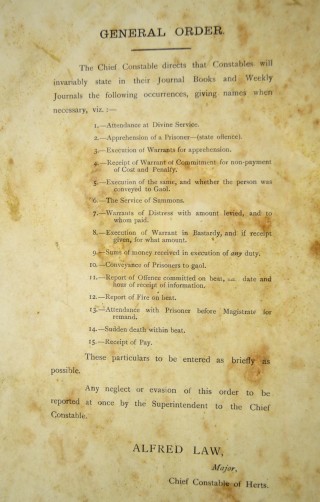 What was life like for a Police Constable in Bishop’s Stortford in the middle of the First World War?

The first volume of the Bishop’s Stortford Police Archive to be prepared for digitisation, the Constable’s Journal (daily logbook) of PC 13, Arthur E. Elderton of ‘B’ Division, for the nine months from July 1915 to April 1916, sheds some light on his daily (and nightly) life on duty.  A list at the front of the book sets out clearly what he had to include.  (See photograph).

PC Elderton carried out routine duties, without the benefit of modern technology or communications, dealing face-to-face with colleagues, the public and the soldiers based in local billets and at Hockerill Camp.  He pounded the beat, meeting other policemen on duty when he attended Conference Points such as the Corn Exchange, the Bridge Inn, The Causeway, the Cemetery, Northgate End and the Police Station at set times throughout the shift.

His regular duties included visiting the pigeon lofts to watch the pigeons being released, issuing licences for the removal of swine at the Thursday cattle market, performing ‘duty re Shops Act’, finding billets for soldiers from several different regiments, visiting lodging houses (possibly billets), and inspecting the sales books of Mr H. C. Lee and H. Sparrow re the sale of arms and ammunition.  Making enquiries “re’ various informations” took up most of his shifts.

What kinds of crimes were recorded?

PC Elderton had to serve summonses or give evidence in court, sometimes regarding Lighting Orders and sometimes the Military Services Act 1916 (absentees were usually fined and returned to the Military Authorities).  He apprehended Charles Moles in connection with an assault at the Union Workhouse.  Once he attended a house where an army captain was threatening his wife with a revolver.  Bicycle theft was a common problem, with more than one going missing from outside the Plough and some from Cambridge, but only once did he have to make enquiries about a Motor Car (Stolen from Southend Boro [sic]).  There were three other reported thefts: a table napkin and food; jewellery; and a silver cup stolen after a man was seen in the house of Rev. H. T. Lane.  The outcome of these enquiries is not given in the journal.

What else did he do?

Not all PC Elderton’s work was connected with crime investigation.  His journal records some other occasional duties.  He visited Mr Mason’s Veterinary Surgeons to see a Dog in Quarantine three times, the fate of the dog not being recorded.  Twice he had to arrange the removal of dead bodies to the mortuary, once after a sudden death at the railway station and again when a body was found in Parsonage Lane.  He served two Bastardy Orders, one to a woman and another to an army officer.  Whenever the Royal Train passed through Bishop’s Stortford, policemen were deployed at the various bridges, including PC Elderton.  And finally, on 16th March 1916, he had a day out: he travelled to Shire Hall, Hertford to collect the ballot boxes for the polling stations in ‘B’ Division.

His diligence did not go unrecognised and by the end of the Journal he has been promoted to Sergeant.