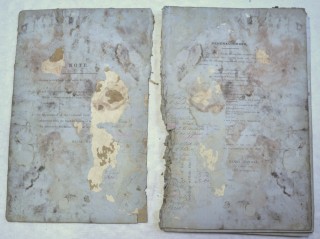 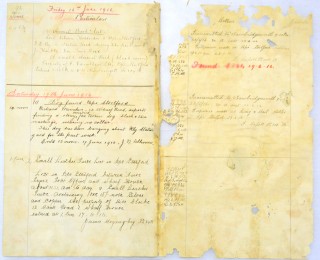 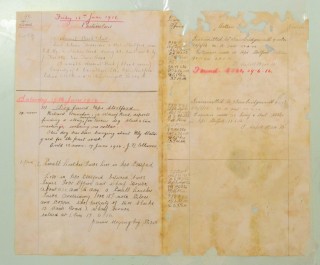 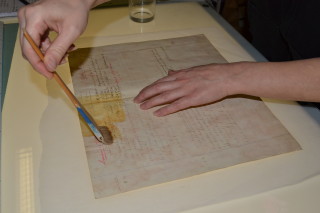 The Bishops Stortford police documents were acquired by HALS in 1992 (Acc 2744) from Harlow Museum.  They had been left on the museum doorstep in plastic bags and suffered from water damage, severe mould and pest infestation.  They consist of 37 volumes and one bundle of loose papers (1841-2; 1889-1918) and include constables’ journals, occurrence books, incident logs and charge sheets. In 1996 further documents were handed to Bishops Stortford Museum (Ref: BSM 916).  This collection consists of 65 volumes (1841-1919) and twelve bundles of miscellaneous documents. The collection is in the same poor condition. The survival of nineteenth and early twentieth century local police records is rare.  A search conducted on the A2A web site (http://www.nationalarchives.gov.uk/a2a/) revealed that only West Sussex Record Office has a comparable coverage for the First World War period and very few late 19th century records survive elsewhere in England.

The information within these records provides a unique insight into community life, social behaviour, crime and punishment and the development of the police force in Hertfordshire – including pears being stolen from gardens, royalty losing their hats on journeys in Hertfordshire, escaped criminals, soldiers deserting, suicide and murder.   Although originating in a local police station, the incidents logged occur throughout Eastern England and the Metropolitan Police District thus providing information about crimes unlikely to have survived elsewhere.  These records are an essential resource, not just for family historians, but also for academics and the history of British policing.  Conserving this material will preserve a rare and valuable resource for the future and enable public access to the unique information held within the documents.

On acquisition by HALS in 1992 this collection was inspected by the HALS’ archive conservator and immediately labelled ‘Unfit for Production’ as it was felt that handling by the general public would cause further loss of material.  The collection at Bishops Stortford Museum is in a similar condition.  Both collections together contain 120 volumes and 3 boxes of loose papers; this is in the region of 20,000 leaves.    In preparation for the centenary of the outbreak of the First World War in 2014 HALS and Bishops Stortford Museum intend to work together to conserve and subsequently microfilm and digitise both collections to make the information contained within them accessible to the general public for the very first time, beginning with those from the First World War period (15 volumes).  At the end of the project the records from the Museum will be transferred to HALS for safe storage.  A catalogue of the whole collection will be prepared by HALS’ archivists and made available on HALS’ web site which is linked to the National Register of Archives.

Jeff Cargill, HALS Archive Conservator has inspected and surveyed both collections in detail and the following is a brief résumé of his findings:   The Constables’ Journals are in a poor state of preservation having been exposed to damp, many of the pages are fused together in places and are extremely fragile along the edges and these will require extremely delicate handling in some instances.  It may be possible to separate the pages but some loss of information may occur during the process.  The Attendance Registers are in better condition but will still require minor treatment.  The majority of the bindings are in very poor condition and many of the covering materials are no longer adhered together.  In most cases, however, the sewing is intact and in relatively good condition.  The text is written in a variety of inks and indelible/copy pencil and many pages are machine ruled. The majority of the records need some level of conservation work to stabilise them and enable them to be handled safely for the process of digitisation.  Volume pages will require careful separation.  This remedial work will allow the material to be handled safely in order for digitisation to take place.  The images will be made using the highest possible resolution so that the original documents need not be consulted again in the future.  After this process the whole collection will be suitably packaged and stored at HALS.

The aim is to conserve and stabilise the material for digitisation. This project has been funded by grants from the National Manuscripts Conservation Trust and The Radcliffe Trust.